Now That I Think About It...

Now That I Think About It...

Aimee Byrd
The Housewife Theologian
October 1, 2014
Share on Facebook Tweet Widget SimpleMailto
...maybe I was "converted under duress." This is one of Captain Believer's Baptism Only's arguments against my fellow MoS co-hosts.
It was my third pregnancy. My husband grew up Catholic, and was therefore double dipped when we had attended a Baptist church for the first seven years of our marriage. Our convictions had since led us to the PCA, yet I was still unconvinced on the matter of paedobaptism. But that was okay, we were assured that we were welcomed as members and could (gasp) join them at the Lord's Table nonetheless.
As we were learning more about God's covenants with his people, I began to experience extreme conviction on this baptism issue. And it was particularly troubling since I was about to give birth. That led us into honest study into the Scriptures regarding the issue of the administration of baptism. This was the first time that I inquired without the baptistic chip on my shoulder. And my presuppositions were crushed. Beautifully crushed.
My presuppositions (thanks to Fred Butler for this image): 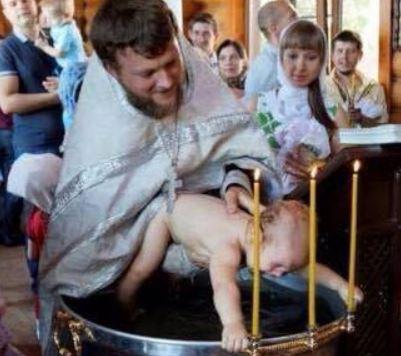 I only mention this as a favor to Turk, because I know how Baptists love a good testimony before a baptism. I speak on behalf of my three children, who were baptized together. Properly.