One of the great missiologists and scholars of world Christianity, Andrew F. Walls, recently passed away at the age of 93. One of my (small) claims to (admittedly minor) fame is that Andrew F. Walls graciously agreed to write the foreword of my book, Inside the Whirlwind: The Book of Job through African Eyes. This is like Michael Jordan agreeing to write a foreword about a book on basketball.

“Sub-Saharan Africa is now one of the world’s principal theatres for the Christian faith. It is the home of a large and growing proportion of the world’s Christians and is beginning to hold the place in Christian discourse worldwide that was at one time occupied by Europe. But studies of African Christianity as it affects and is expressed in the lives of ordinary people are still not common; which is one good reason for welcoming this remarkable book.” ~ Walls in the foreword of Inside the Whirlwind

If you know anything about Walls’ passionate life and penetrating scholarship, the above paragraph aptly captures Walls’ clarion call to acknowledge the seismic changing reality of Christianity that some people still have not fully acknowledged, let alone embraced.

During the age of Christendom, it was Helaire Belloc who observed what was once a rather common, ho-hum observation of a bygone era: “The Faith is Europe. And Europe is the Faith.” Today, while Christianity in Europe is in a deep recession, nearly one out of every four Christians on the planet lives in Africa. This changing “center of gravity” of Christianity prompted Walls to claim that “anyone who wishes to undertake serious study of Christianity these days needs to know something about Africa”.[1] 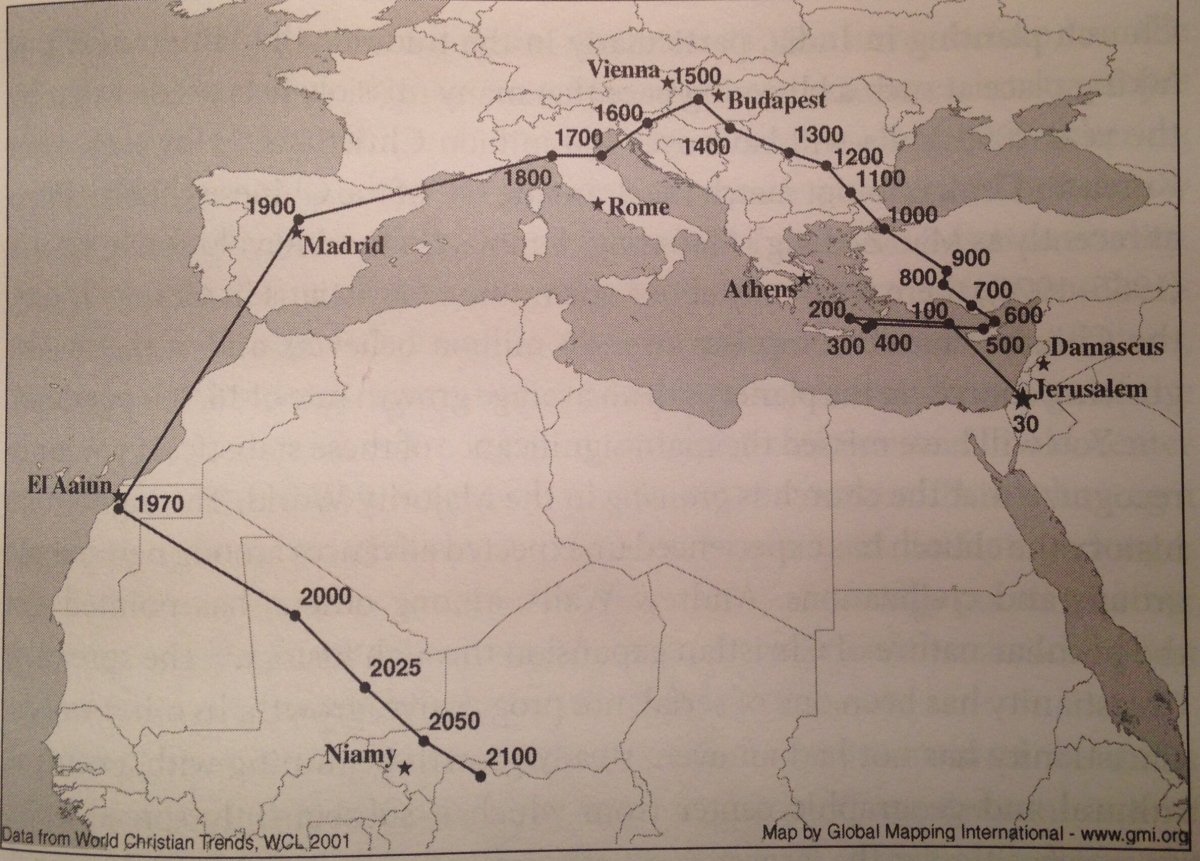 From Timothy C. Tennent, An Invitation to World Missions.

Yet, in 1970, an interesting historic development began.

In a few decades from now, the phrase “white northern European Christian” may very well strike people like an odd curiosity eliciting a surprised reaction, somewhat akin to finding a Hindu in a 19th century covered wagon heading westward on the Oregon trail. Not completely impossible, but a rather unexpected curiosity of history. When you think of Christianity today, the representative “face” of the religion is now a Latino woman living in poverty in Sao Paolo, Brazil or a young Nigerian man selling flip-flops on the streets of Lagos, Nigeria rather than a blue-eyed, blond-haired white worshiper of European descent. (See Philip Jenkins, The Next Christendom).

Christianity migrates where it is wanted. Since 1970, the center of that desire for Christ has increasingly been in southern expressions of Christianity: in Africa, in South America, and in Asia. What does this mean for Christians in America?

1. We will increasingly practice the Christian faith as a minority presence within secular western culture.

The cultural war is over. Secular expressive individualism has won. Christians will increasingly find themselves swimming against the current in our worldview, in our ethics, and in our identity as believers in Christ.

The days whereby the church and the world overlapped significantly in behavior and people simply flocked to church because “that’s what respectable people do” is long gone. To be a western Christian is to increasingly find oneself marginalized from the dominant cultural narrative.

2. Can we practice true humility and learn from expressions of Christianity in places where the faith is growing and expanding?

For far too long, American Christians have tended to think: being close to the center of power is necessary to maintain our cultural relevancy in order to keep our numerical strength and cultural influence. Yet, places where the faith is growing are noticeably on the fringes of political and cultural power. Christianity is growing in Communist China and in poverty-stricken places like favelas in Latin America. We need to learn from these humble expressions of the Christian faith all around the globe. A deep-seated, Christ-centered, joy-fulfilling faith does not require numerical strength or cultural power (no many how many times we are prone to forget this!). In fact, the Christian faith often flourishes and deepens precisely in the absence of all cultural trappings of power.

Over the next few weeks, great tributes will pour in from all corners of the globe. A few years ago, Christianity Today called Andrew Walls “the most important person you don’t know”. His two ground-breaking books are The Missionary Movement in Christian History: Studies in the Transmission of Faith and The Cross-Cultural Process in Christian History: Studies in the Transmission and Appropriation of Faith.

Thomas Kidd at The Gospel Coalition and The University of Edinburgh’s Center for the Study of World Christianity have already given short tributes.

Andrew F. Walls’ ideas and influence were critical for the study of global Christianity as we know it today.

Jason A. Carter (Ph.D., The University of Edinburgh) is Lead Pastor of Trinity Wellsprings Church (Satellite Beach, FL), blogs at "Gospel-Centered Shepherding", and is the author of Inside the Whirlwind: The Book of Job through African Eyes. Previously, Jason spent 11+ years as a missionary-professor at a grassroots seminary in Equatorial Guinea, the only Spanish-speaking country of Africa.

"A Resolution for the Church" by Zachary Groff

"Mission to the World" by Philip Ryken

[2] Though the expansion of European Christianity was aided by its economic strength, technological might, and colonial power. It will be interesting to see how southern expressions of Christianity affect the worldwide church in the absence of power and might.