When the 'P' word is apparently not 'Presbyterianism'

Karl Marx commented that history repeats itself the first time as tragedy, the second as farce.  When it comes to ministerial falls, sadly the tradition today is to go straight to farce.  Thus it is with Tullian Tchividjian’s fall and rise.  All of the celebrity conventions are there: The use of a well-known counselor brought in specially, the faux intimacy of the twitter feed, and now a slick podcast on coming back after a fall – less than two months since his confession that he betrayed his wife and broke his marriage vows.  There are even the predictable fans out there who seem to think that Tchividjian is essential to the gospel, as the message clearly depends upon his return to the pulpit ASAP.   I confess, I have no idea why he has this compulsive need to make the whole of his life a public performance or why people fall for it.  Patronizing pseudo-pious answers about seeing how great God’s grace is are beside the point.  This is showmanship so let's call it what it is.   Do such people exist in private in any meaningful way, I wonder?

I first came across Tchividjian in the context of his misunderstanding of Martin Luther as a supporter of his view of grace.  Eventually, I offered to fly to Florida to debate the issue with him.  His rather weird response was to go on some radio show and accuse me of breaking the Ninth Commandment.  At the time,  a number of his more ecclesiastically savvy supporters argued that such a debate was unnecessary, that he was a churchman and thus answerable only to church courts.  That response was a mixture of confusion and clarity.  Confusion, because ignorance of history is not in itself a matter for ecclesiastical discipline.  I simply wanted to correct his embarrassing misunderstanding of Luther’s thought.  Clarity, because yes, he is a minister and thus discipline matters do fall under the authority of Presbytery and due process.

So where is Presbyterianism in this latest debacle, a matter which most certainly falls under the category of a discipline matter?  Tchividjian is, or at least was, a Presbyterian pastor.  That binds him by solemn vow not simply to teach certain doctrines and to live in a 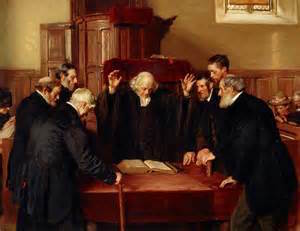 certain way but also to act relative to his sin according to certain principles and processes.   When he finds himself delinquent in doctrine or life, he should report himself to his Presbytery and place himself under its discipline and pastoral care.   Anyone interested can find the relevant vows and processes in the PCA Book of Church Order, Chapters 19.3, 21.5 and 38.1.  His fellow Presbyters, not some life-coach to the Christian stars and least of all his Twitter followers, are the ones to lead him to repentance and to determine the passage back to Christian fellowship (though not, I believe, in the case of an adulterer ever back to a teaching or ruling office within the church).   Has Tchividjian followed this process?  He is bound by vow so to do and thus part of the evidence of a humble and contrite heart is precisely this submission to due process.

Perhaps he is following the PCA Book of Church Order's provisions.  But everything, from the role of Paul Tripp to the verbal diarrhea on Twitter, looks to me unlike any typical Presbytery discipline/pastoral process with which I am familiar.   More likely a comeback is being set in place and that that has been the case from the start.  And when we find slick podcasts about come backs after failure popping up on the web less than two months after the crisis – well, that seems more consistent with advice one might perhaps receive from another body beginning with a ‘p’: not ‘Presbytery’ but ‘Public Relations Consultancy.’