My trip to Belfast last week to speak for the Reformed Presbyterians and the Evangelical Presbyterians was a great reminder of the truth of Chrissie Hynde’s lyric, some things change, some stay the same. 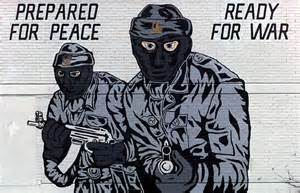 As to staying the same, I find that every time I visit Ulster I am invited to some clandestine meeting or other.  Last time I spoke to a gathering of ministers and ministerial students in a deserted and disused manse on the north coast.  Seriously, I did.  From the looks on their faces, passers-by clearly thought something sinister was going on. This time I met at Colin the Book’s request with the Provisional EPCI – OK, they are the same guys as the EPC and the PCI but they wear balaclavas and partake of the water of life and (some of them anyway) the Halfling’s Weed.  Like the OPC, then – prepared for peace but ready for war. I also stayed once again with the Watsons, wonderful and kind people who have the misfortune of being the Pope of Ealing’s parents-in-law.  We must pray for them in their affliction.

As to change, if I had been told on my last visit two years ago that my next visit would involve addressing the Reformed Presbyterians on the matter of transgenderism, I would have said you were mad.  Completely mad.  But such are the times in which we live.  A morally conservative place like Northern Ireland is changing rapidly, in line with the general chaos now reigning supreme in the western world.   The need for the church to teach her young people well and thoughtfully on such issues is now an absolute imperative.  And if places like Northern Ireland are crumbling on issues of sexuality, there is no hope for anywhere else that they will be immune to this deadly nonsense.  Yet Christ is the same, yesterday, today and forever.   Some things indeed do change, but the problem -- the inventive creativity of human sin --and the solution -- the  all-sufficient Christ  -- do not.

The highlight of the trip, though, was preaching at the EPC family day/general assembly on Saturday and then at Stranmillis EPC in Belfast on Sunday. Any general assembly that does its work in one hour -- yes, one hour! -- has to be a model for the rest of the Presbyterian world.   And the EPC is like the OPC – a small, no-frills Presbyterian denomination.  It is a reminder that Christianity is at its best on the ground, where ordinary people simply believe and seek to live as Christians.  The congregation at Stranmillis is a similar size, and has a similar ethos – serious about the gospel, relaxed about life, friendly to all – that marks the congregation of Cornerstone OPC here.  Strange to tell, at no other church do I feel so much at home preaching than at this small gathering in Belfast.  A real home from home. 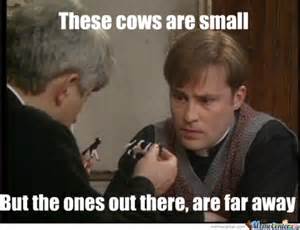 via Colin the Book.   It is a labour of love and a wonderful history of a tiny but tough denomination that, like the OPC, has punched above its weight.  Central to the narrative is the Davey heresy trial and the role of the student of Machen, W.J. Grier who, after the split from the PCI, was to minister in Stranmillis for many years.  A number of theologians, including my friend and fellow Father Ted aficionado, David McKay offer reflections on the trial and its aftermath -- a section worth the price of the volume in itself.  And here, to add a human touch, is a picture of David explaining Irish cows to me during a break in Friday's lectures.

My only criticism of the volume is the picture of the Pope of Ealing on page 213.  I cannot help but feel it would have been better if the publication had been delayed a year so that the much better looking 2016 speaker could have been featured instead.

Seriously, a great book.  Congratulations – and much gratitude – are due to Ernest for his labours on this project.  May it enjoy a wide readership. A reminder that fidelity to the truth is neither glamorous nor often easy but is that to which all Christians are called.