Revoice, Evangelical Culture, and the Return of an Old Friend

With moving job and house in the last two months, I was only vaguely aware of the Revoice Conference until a few weeks ago.  Then suddenly my phone started to light up as friends forwarded me tweets and blog posts and interviews, pro and con.  Finally, at the weekend a whole pile of very disturbing soundbites landed in my inbox from various sources.  I have yet to listen to the talks so cannot offer any 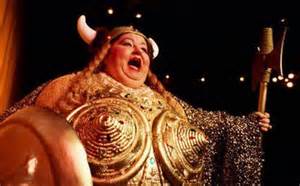 criticism of them but I have noticed that, in all the critiques I have seen, a couple of key dots have not been connected: those between Revoice and the general culture of Big Eva.  (For new readers, if any such exist, Big Eva is not a large German who works in border control for the Bundesrepublik but my term for the network of large evangelical organizations and conferences that seeks to shape the thinking and strategy of the American evangelical churches.  She used to be a regular in this column but has been away on an "extended furlough" for a couple of years).

What Big Eva has done is create an economy of power, people, and indeed money which is non-ecclesiastical but highly influential within evangelical churches.  It is a populist movement of tremendous influence and minimal accountability.  It provides an identity for its most passionate acolytes.  And because it promises rewards to individuals and organizations – influence, students, platform – it is both very hard to criticize and functionally unaccountable to any but its own. The Trinity controversy of two years ago was a case in point: no church creed had ever taught the nonsense that had become so pervasive in evangelicalism.  Quite the contrary – the creedal history of the church was arguably constructed to exclude precisely the kind of views that were being espoused.  But key conferences and key organizations had a vested interest in sidestepping orthodoxy and demonizing any who pointed that out.

There is an important distinction to be made here.   Discussion of matters of note in the public square is a good thing, whether by books, articles, blogs or, for those who prefer their arguments unencumbered by polysyllabic words, long sentences and, well, argument, Twitter.  But provoking people to think about issues by offering forthright opinions is one thing.  Aspiring to be a movement, to direct and shape the policies and testimony of the church is quite another.   That should be done through the appropriate ecclesiastical bodies – whether sessions, consistories, elder boards, presbyteries, synods etc.

And this brings me to Revoice. Setting aside the content and specific intention of the conference, it is surely unexceptional on one level: it is just another example of that culture whereby a non-ecclesiastical movement incarnated in an online network and now a conference strives to speak to the church in a very directive manner and thereby to drive the church's confession.  The big question for Big Eva then becomes 'How can we respond to these people when the kind of non-ecclesiastical, populist, celebrity ecology of power and influence we have created and harnessed is the same in principle as that which makes them so significant and potentially influential?'  Or perhaps more bluntly 'What have we done?'

To give an example: A couple of years ago, I was asked to respond to what was arguably a pro-gay article written by an ordained minister in the PCA.  My ministerial credentials are in the Orthodox Presbyterian Church but I agreed to write the piece and afterwards received words of thanks from colleagues and friends in the PCA.   But none of those who expressed gratitude brought charges against the individual concerned.  Thus, while I had addressed the theological and ethical problems with what he wrote, the ecclesiastical problem remained.   That is ridiculous: you cannot solve an ecclesiastical matter via a blog post.  Only ecclesiastical process will do that.

Such process is rightly hard, with the onus to prove the case placed on the accuser.  Paul was well aware of the existence of wicked slanderers within the visible church.  That is why he made it clear that no accusation against an elder should be taken remotely seriously without evidence from two or three eye-witnesses, 1Tim. 5:19. Hearsay or gossip is irrelevant.  To act on such is simply not Christian and those who do so should hang their heads in shame for the malicious harm they do.  Mob rule by the (self) righteous is still mob rule.

Now, if someone has taught falsely at a conference or in writing, the provision of witnesses should be no problem.  But Paul's point is not simply about evidential criteria for action.  He is clearly indicating the need for due process: the presumption of innocence and the need for proper ecclesiastical adjudication.  Even the worst heretic, we might say, is entitled to a fair ecclesiastical trial.  And the people who make up the congregations in our denominations week by week are entitled to be protected by their elders and ministers not by blog posts or conference speeches but by holding ministers accountable for what they teach and how they act, and that in accordance with biblical, ecclesiastical process.  To state the obvious: it is part of what elders and ministers have solemnly vowed to do.   More importantly -- it actually deals with the matter in a biblical way which therefore has an impact upon the church which no blog or conference, let alone tweet or hashtag, could or should ever have.

Unfortunately, the culture of Big Eva both facilitates the influence of a conference such as Revoice and makes an effective response unlikely.    To repeat one of my mantras, Big Eva is built around big conferences and big personalities.  Neither need to be problematic.  I have enjoyed attending the occasional big conference and have profited from books by big names.  What is problematic is that some of these conferences and their concomitant celebrities have an intentional significance beyond offering a time for some fellowship and some good teaching.  They are a movement.   Revoice is only playing the same populist, extra-ecclesiastical game as Big Eva -- building momentum via conferences, networks and its own stable of celebrities.   And if Big Eva responds as it usually does – with an alternative conference or some blog posts or yet another statement/petition -- then boundaries will for sure be more sharply drawn, it will be clearer who plays on which team, and maybe some laity will be genuinely helped to think more clearly about the issues -- but nothing of ecclesiastical substance will really be accomplished.

not simply offer critical tweets or mint new hastags.   They should look at their books of church order and, if the evidence warrants it, they should file disciplinary charges in accordance with the processes outlined therein.  Blogs, articles, and alternative conferences may all have their legitimate place in helping the laity think through the matters Revoice and its critics have raised.  But every minister has the right to due process.  More importantly -- only decisive ecclesiastical action will actually deal with the problem.  And if Revoice is a Rubicon and no such action comes, then, to quote Julius Caesar, the die is cast.  Those whose orthodoxy lives by the dynamics of the Big Eva economy will find that it dies by the very same.