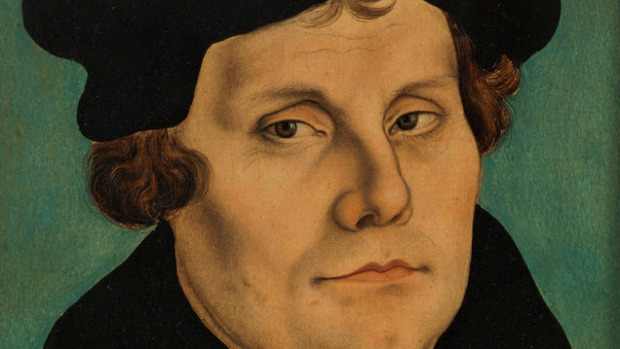 As October looms, so does Reformation season.  And this year, of course, we stand on the threshold of the 500th anniversary of the posting by Luther of his Ninety-Five Theses Against Indulgences.  Next year will no doubt bring a bumper crop of Lutherana in its wake but in a series of posts over the coming weeks I want to make suggestions about books that anyone who wants to know more about the great Reformer should own right now, in order to understand what all the fuss will be about in 2017.

The classic life, and the place for to start your Luther studies, is still Roland Bainton’s Here I Stand.  It was the book which first ignited my own interest in the Reformation, not simply for the clarity of the prose but also because Bainton (himself a somewhat radical figure) had an unerring ability to sympathize with the marginal and the outsider.  It is no coincidence that one of his other classic biographies was that of Michael Servetus.   Of all Luther's biographers, Bainton captures the fast-paced action of so much of the Luther story.

After Bainton, Martin E. Marty’s short biography, is also quite superb.  Marty is a scholar of real stature but he wears his learning lightly.  This book is an easy read and contains many anecdotes which reveal the humanity of Luther in all of its amusing ordinariness.

The gold standard for sheer detail is the biography by Martin Brecht, translated into English in a  very readable three-volume edition.  Do not be intimidated by the work's daunting size.  Luther’s life was full of excitement and drama and these massive volumes carry the reader along.  Brecht has read deep and wide in the Luther corpus and the great events of the Reformation are blended here with many anecdotes which reveal Luther the man.

Heiko A. Oberman is without doubt the most important Reformation scholar of the last one hundred years.  His work on the intellectual background of the Lutheran Reformation in late medieval nominalism fundamentally transformed our understanding of how Luther should be understood.  Indeed, Oberman, perhaps more than anyone else, made the compelling case for understanding Luther as a premodern figure, a man of the Middle Ages, and thus to be distinguished from almost every other Reformation leader.   His Luther: Man Between God and Devil is perhaps his most brilliant and most speculative book.  Blending insights from his own late medieval studies with some of the psychological insights of Erik Erikson, this is a work to be read for its mastery of the subject, its interdisciplinary brilliance, and its (sometimes implausible but always breathtakingly brilliant) conclusions.

Finally, two very recent biographies are worth reading.  Scott Hendrix’s Martin Luther: Visionary Reformer is a fine work of scholarship, the culmination of a lifetime of study and reflection on the subject.  Then there is distinguished historian Lyndal Roper’s excellent Martin Luther: Renegade and Prophet, which is already available in the UK but not scheduled for the US until March, 2017.

Of these two, Roper’s perhaps has the edge.  A feminist, she is not naturally sympathetic to Luther but has produced a remarkably nuanced and insightful work.  What she does is present a Luther unaccommodated to modern sensibilities by pressing particularly on the issue of his eucharistic thought, a point which divides him decisively from strands of modern Protestantism which try to claim him as forebear.   This is both theologically and methodologically important.  Theologically, it presents the real Luther, the Luther who abominated Zwingli for his memorialism.  Methodologically, it requires that the modern reader face Luther as he really was and not make him the comfortable companion of contemporary American evangelicalism – a move that can be made far too simply when his gospel of justification is abstracted from the doctrinal matrix within which it must be understood.

So that should provide some ideas for how to approach Luther through his life.  Next week, I will offer some thoughts on where to start reading his voluminous theological writings.