Why Do We Know So Little About Two-Third's of Christ's Disciples? 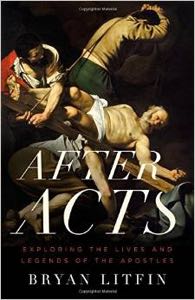 Well school is out and the calendar also confirms the beginning of summer. But it’s not quite official for me yet because I haven’t started on my summer reading list. My family has moved from West Virginia back to Maryland and the busyness that comes with that has me plodding a little slower than usual. I thought a couple of quick reads would be good while I am doing the whole “paint the house” thing. And so I just finished Bryan Litfin’s book After Acts: Exploring the Lives and Legends of the Apostles.
Since I’ve read some history on this topic in the past, there weren’t any big surprises for me in this book. It is a great introductory book on the lives of the apostles and other popular biblical figures of the time. I thought it clever that at the end of each chapter, Litfin gave a report card with grades corresponding to the historical probability of each legendary claim on the person.
Of course, I would love to have more information on some of these prominent people in Scripture than we actually have. And yet I know that we have everything that we need and all that God wants us to know. But this book got me thinking a little more about that when I was through reading it. There are chapters on Matthew, Mark, Luke, John, Mary, Thomas, James, the other apostles, Peter, and Paul. Do you see what he did there? Before getting to the two most prominent apostles, thrown in there and yet carefully placed is a chapter on the other apostles.
Liftin opens this chapter asking the reader to try and name all twelve disciples. Can you? We know very little about more than half of these twelve select men. Four of the twelve disciples get their own chapter in Litfin’s book, but seven of the original disciples are summed up rather briefly in this designated chapter on the other apostles (Judas Iscariot does not get the dignity of a bio, and we know little about his replacement, Matthias). It makes you think, doesn’t it? Why do a mere third of the disciples have so much more recorded about them in Scripture and in history books? Why did Jesus choose twelve? Why not only choose four if the other’s lives are so obscure to us?
And yet, as Litfin points out, all twelve “must be very important in God’s plan, because Revelation 21:14 states that in the New Jerusalem, ‘the wall of the city [will have] twelve foundations, and on them [will be] the twelve names of the twelve apostles of the Lamb.’ Jesus himself said the twelve disciples would rule over the tribes of Israel (Matt. 19:28; Luke 22:30)” (126). We know this is a significant number, as there were twelve tribes of Israel and the church is the new Israel. And we know that God’s choices are never arbitrary. These men were appointed to special positions in the church and spent precious time with our Savior. And yet we see so much more of Peter and John’s contributions than we do of Andrew’s or James the son of Alphaeus. Only three disciples were privileged to be in that inner circle where Jesus revealed his divine glory in the transfiguration. Why not all the disciples?
My wondering about this makes me think about when James and John’s mother asked Jesus if her two sons could sit at the right and left hand of Jesus in his kingdom. In some ways they are no different than the rest of us kingdom citizens, there are plenty of times when we just don’t get it. We jockey for positions and question God’s purposes in where he has us to serve. We think of ourselves above God and his kingdom. Jesus answered, “You do not know what you are asking. Are you able to drink the cup that I am to drink?” (Matt. 20:22).
G. K. Beale commented in his lectures I am listening to on ITunes U that Jesus came to serve us before we received the privilege to serve him. That is truly amazing. Of all the things I don’t know, I am sure that all twelve disciples were fully satisfied in Christ. And we may not know much about their history but we know the one they were discipled by. And we join them in service wherever we have been called. It is a great privilege to be in the kingdom of God.
As Litfin was sifting through all the legends, debunking most of them, I couldn’t help but think of how much more glorious the real story is going to be when we see all the workings of God revealed in glory. That’s the point, isn’t it? To God be the glory.
Share on Facebook Tweet Widget