Aimee Byrd
February 9, 2018
Yesterday I had a longish drive to Virginia Beach, which means time to indulge in some podcasts. I already listened to the first season of What Really Happened?, where narrator Andrew Jenks digs through all the surrounding details of old news stories to see if we really got it right. It fed the inner conspiracy theorist in me, as he reexamined the stories of Muhammad Ali talking a 21-year-old from committing suicide, Chris Christie’s Bridgegate, the true nature of Britney Spears’ meltdown, or Michael Jordan’s retirement, to see if things are really as they seem. Jenks received so many responses to Season One that he was able to put together more interviews corresponding to each podcast episode, further investigating and resolving some 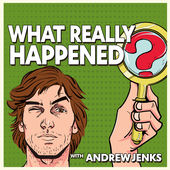 listener responses.
Jenks interviewed his friend, actress Brittany Snow, in one of the episodes, and I noticed how it turned into a bit of a therapy session as they talked about practices that help them get out of their own heads and mental issues. I noticed a blend of genuine longing to be a good person, for holistic health, and to be a giving member of society. For the most part their talk was sophisticated, which made the swear words they occasionally dropped land like the bombs we refer to them as.
Anyway, I noticed something pretty interesting as Jenks and Snow began talking about what helps them physically, emotionally, and spiritually. Both of them practice a newish trend I’ve heard about called writing a daily gratitude list. It’s just what it sounds like: every day you are to set aside some time to write down, preferably hand written, at least five things you are grateful for. This helps steer negative thinking and depression. It turns out gratitude is the secret to happiness. Even Oprah is doing it.
While they are reveling in this epiphany, I am thinking about how this functions as a worldly substitute for prayer. It made me kind of sad. I mean, I’m happy that they have discovered gratefulness, but whom are they thanking for all that they have discovered to be thankful for? They have recognized the gifts, and look how healing that is! But they have not found the Giver.
It also convicted me for what I take for granted. I know the Giver and I complain too much. But that is where prayer is so much more delightful of a blessing than gratitude lists. I can go to the Giver and thank him personally. But I can also name my sin and ask for forgiveness, ask for sanctifying. And it is real.
Quickly, the conversation turned to TED talks: short bursts of inspiring ideas, where Technology, Entertainment and Design converge in the genre of free YouTube videos. Jenks made the comment that he is obsessed with TED talks. While most people listen to music when they work out, Jenks listens to these “powerful talks” to get out of his head. I couldn’t believe my ears, as I was driving down the highway realizing how Jenks and Snow are turning to gratitude lists and TED talks as a sort of  means of common grace. Where gratitude lists substitute for prayer, TED talks are like auxiliary sermons.
The show was turning into a different sort of What Really Happened? I was listening to two seekers recognizing that they need to hear something outside of themselves, but not receiving the very message they desperately need to hear. Not only is the gospel message powerful, but the word itself is living and active. Sure, gratitude lists and TED talks can be good evidences as God’s common grace to all mankind. (And there is a large scale of good to bad TED talks.) But it also made me think of how easily Christians too miss something so simple. I love talking about the deeper aspects of theology, but I never want to miss the big picture of how God ministers to his people by giving them Christ through his ordained means of grace. The means are ordinary, but the grace is extraordinary.
What a blessing it is to be a part of his church.
Share on Facebook Tweet Widget