Virtue Rewarded, Beauty and the Beast, and 50 Shades

Aimee Byrd
March 7, 2017
So in my latest obsession with New England women living around the times of 1650-1750ish, I keep coming across the mention of a popular fiction book that was all the rage, Pamela or Virtue Rewarded, by Samuel Richardson. It’s about a 15-year-old young woman who is taken captive by an abusive man, Mr. B. She starts out as a servant in his household who has been taught the ways of being a lady by his mother. After this mother’s death, Pamela is put under the watch of Mr. B’s horrible accomplice housekeeper, Mrs. Jewkes.
Laurel Thatcher Ulrich writes about Pamela in her book Good Wives as an emblem of the transformation of the “altered concept of female sexuality” from “Puritan repression,” with external controls of sexual behavior, to that of “Victorian morality,” where “woman assumed an active role as purifier of society.” In the latter, rather than the family government and the civil courts controlling the woman’s sexuality, morality is enforced more with the weapon of internal guilt. 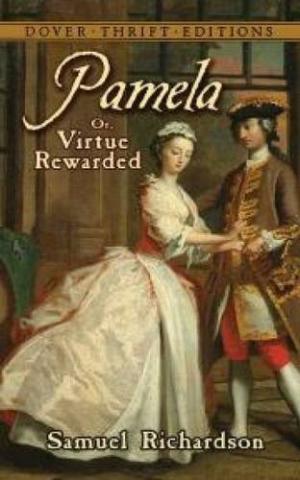 Pamela’s story is told through letters she is writing to her parents. These letters detail attempted rape basically. Mr. B keeps asserting himself on Pamela with sexual advances, and to avoid losing her virtue, Pamela goes into some sort of fainting spell each time. Neither her parents nor Mrs. Jewkes care to come to her rescue.  This housekeeper guardian is hired to work on Pamela so she will succumb to Mr. B.’s advances. The odd twist is that “the lovely Pamela won [her captor’s] admiration as well as his love” by her virtue. Mr. B. suddenly wants to marry Pamela and she obliges, prevailing as a virtuous bride (until later when it is revealed that he has an illegitimate child through an affair---but don’t fret, he was really sorry and all).
And so this title Virtue Rewarded reveals a lot about a woman’s sexuality. The critics of the time couldn’t figure out if Pamela was “really as innocent and as artless as she appeared, or was she simply a shrewd bargainer who knew how to play her virtue as the ultimate trump, refusing to become a mistress until she had become a bride” (quotes from Good Wives, p. 104)? No matter the case, the book was both widely read and praised. Richardson’s readers could identify with the gender paradigms of the time: the aggressive and compulsive man, woman’s sexuality wielding great power, and her virtuous responsibility to reform the man with it.
Why was everyone so okay with this, you might ask? Well, one discerning woman of the time did. I’m also reading through The Journal of Esther Edwards Burr. I had just finished reading an entry of Esther’s, complaining about Pamela, before I read about it in Good Wives:
Pray my dear how could Pamela forgive Mr. B. all his Devilish conduct so as to consent to marry him?  Sertainly this does not well agree with so much virtue and piety. Nay I think it a very great defect in the performance, and then is’n’t it seting up Riches and honnour as the great essentials of happyness in a married state? Perhaps I am too rash in my judgment for I have not read it half out tho’ I have enough to see the Devil in the Man. (98)
(March 12, 1755)
Most men are not devilish like this. But it did make me think of the message that is taught in the popular children’s movie Beauty and the Beast. The stories have similarities. Have we come much further along all these years? Sure, the beast doesn’t physically accost Belle with sexual advances, but he rips her from her family, holds her captive, has an abusive anger problem, and orders her to starve if she refuses to eat with him. His character is an actual beast. And then, lo and behold, Belle’s beauty and virtue reform him, she falls in love with her captor as well, and he of course turns back into a prince (this is from the cartoon version anyway).
I was just talking with a friend about how girls in the evangelical culture are not typically raised to discern evil. Rather, we like to keep our little girls in a sanitized bubble where they feel confident in a happy ending. We rightly want to teach them purity and virtue, but we need to beware of overemphasizing the sexuality component and overcasting that above the glorious image of God that we are to holistically reflect. Therefore, we also need to be asking some questions about some of the messages that our children pick up regarding their beauty and sexuality. Is beauty rewarded by the ability to overlook evil, and then to reform it by our own virtue? Are beauty and sexuality merely commodities that we withhold from consumption to manipulate behavior? Can beasts be reformed?
Esther Edwards Burr had enough judgment to see the Devil in the Man of Pamela’s story. Apparently Pamela’s own parents in this fictional tale didn’t. Ulrich explains:
If chastity was property in Richardson’s novel, it belonged to the heroine, not to her father or to any other man. Using her own assets, Pamela won the title of wife. But victory over the sensual advances of Mr. B. was achieved only by overcoming the governance of Mrs. Jewkes, who had failed in her role as protector. It is as though Richardson were saying that the lore of the old wife was insufficient to protect a young woman in the changing world of the eighteenth century. Bereft of parents and of guardians, she must acquire a new world of values, breaking out of the ancient community of women into the sequestered paradise of an idealized marriage. (Good Wives, 105)
Is it too far of a jump then to suggest that the popularity of 50 Shades may be a reaction to the history of a woman’s sexuality, and an outright playing out of the premise of it’s bondage? Even the names, Anastasia Steele and Christian Grey, give the all too familiar plot away. Here the heroine woman is no virgin, but we still find her exchanging her sexuality in a contract, played out in a detailed dominant/submissive relationship, as it overcomes the man who professes his love to her and marries her. Anastasia wins the title of a wife. In a most unvirtuous story, where the woman’s sexuality is explored in the most shameful ways (we could even say the beast in him brought out the beast in her), it strangely leads to….virtue? It doesn’t make any sense, but maybe I can see where it came from. The secular woman has aquired a new world of values. And once again, the poor woman did not have the judgment to see the Devil in the Wealthy Man.
Share on Facebook Tweet Widget