The Real Housewives of the Ancient World

Aimee Byrd
September 3, 2018
My last article lamented the lack of published evangelical Christian female academics, as well as the gulf that we have between academia and ordinary layperson. I incorporate the work of different female academics in my own work, and often highlight them on the blog. Here are some I have featured before:
Karen Jobes
Christine Pohl, here and here
Michelle Lee-Barnewall, here and here
Sara Moslener, here and here
Cynthia Westfall
Today I want to briefly introduce Linda Cohick’s, Women in the World of the Earliest Christians. What I really appreciate about this book is that her work offers a comprehensive picture of women during this time, especially due to what I call the “in between the lines” research she offers.
History has taught us about the extreme subjugation of women in Greco-Roman patriarchal culture. Likewise, we see the accepted opinions of the Jewish rabbis in the first century recorded in the Mishnah, such as the popular Eliezer ben Hyrcanus’, “The words of the Torah should be burned rather than entrusted to women” (JT Sotah 3:4, 19a). We know that the typical way things were set up was that the domestic sphere was the realm of the women, while the men were able to take the reins in the social sphere, conducting business and interactions outside of the home. 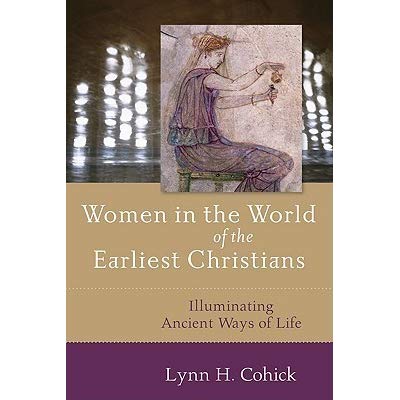 And yet one of my biggest observations about Cohick’s book is how history teaches us that some things do not change---in between the lines history, that is. While we are more aware of what the literary documents and their attached ideologies and agendas say, Cohick couples this research with some of her own, looking at epigraphic, inscriptional, and archaeological remains to paint a fuller picture of the life of women during the time of the early church. And we see that in between the lines of the polemical work and ideologies, women are filling in with everyday contributions: relationally, vocationally, and even theologically.
Cohick opens with her intentions for writing:
I do not intend to present here a theological argument that debates important issues concerning women in the contemporary church. Rather than make theological assessments about women’s ordination, for example---I leave that to church polity makers---my more modest intention is to provide and engaging and accurate reconstruction of ancient women’s way of life. (21)
One of the biggest themes in the book is that status trumps gender. So as Cohick gives us a thorough look at all the different vocations for women as daughters, wives, concubines, mothers, and in both gentile and Jewish religious activities, she examines the difference wealth and status make, also looking at the common life in slavery and prostitution, on one end, and benefactors and the institution of patronage, on the other. It is a fascinating study in which the reader sees how “Greco-Roman culture and Early Judaism were deeply penetrated by layers of social status. Not only legal categories of free, freed, and slave, but also relative wealth and pursuit of honor played major roles in determining the choices available to women. Thus a survey of women’s lives in the Greco-Roman world must consider issues of gender, class, status, and ethnicity to fully appreciate how women negotiated their local worlds” (22). This is just as true today. Whatever cultural codes and ideologies we live in, both secular and religious, there is often a much more complex story of life being lived in between the lines.
The book begins with the grim start for the less-desired births of Greco-Roman females, whose lives were in the hands of their father’s decision, often resulting in infanticide or abandonment. Abandoned baby girls were sometimes taken by other families and raised as slaves and/or prostitutes. The accepted daughter would be raised in her own family under the patriarchal expectations of the time, where she could be “both beloved by her family, and is a cause of great anxiety” (64).
But the book ends with another picture that demonstrates how wealth and status can elevate a woman as a female benefactor who would “have a voice and an authoritative role in the community, granted to them without consideration of gender”:
For all its faults (noted by ancients themselves), the institution of patronage was in many respects gender-blind. As such, it allowed freedom of movement at most social levels for women to participate in the social, economic, and political environment without any cultural condemnation. Thus, while a woman might otherwise be stigmatized for speaking or acting publicly on economic, religious, or political matters, a patroness had liberty to exercise her ideas and interests with society’s blessings. (320)
This provides a clarifying lens as Cohick discusses Joanna (somewhat building off of Bauckham’s fascinating chapter in Gospel Woman, proposing Joanna and Junia the apostle may be the same person, Junia being the Latin name of the Hebrew, Joanna), Lydia, Phoebe, and Mary Magdalene. Her work on Paul’s embracing of reciprocity as the key aspect of patronage was God glorifying, fascinating, and enlightening. In Paul fashion, he turns the cultural model right-side-up, so that we see God as the “ultimate Patron, and all Christians as his clients. Thus to place himself in the socially inferior role of a client to the Romans is not threatening, for he is also on a mission for God, which counterbalances the social equation. So too with Phoebe---her benefaction does imply her socially superior status. But her role as emissary (deacon) for Paul and the church at Cenchreae mitigates the harshness of the asymmetrical relationship” (307).
Critically speaking, there were points of speculation, admittedly by the author; but all good, critical historians have to use their imaginations. Also, there were sections where it seemed Cohick painted a positive picture from in between the lines that were more exceptional discoveries than descriptions of life for everyday women. But her work has certainly expanded the view of women during the time of the early church and shows “rural women worked alongside men in caring for their animals, building their homes, and feeding their families” and that “slave women did all manner of work required in the home and in the market place; many worked as prostitutes.” She certainly does not “suggest an egalitarian paradise during the Greco-Roman period,” and succeeds in “encourage[ing] the reader’s imagination to think beyond the stylized snapshots of ancient women sequestered in cramped homes, barefoot and pregnant.” This line captures her work well:
I am not sanguine enough to think that we can recover women’s actual voices, but I remain confident that echoes of their heartaches and successes are recoverable. (324)
This is a historic, academic work, and therefore takes a bit more reading skill for that genre. It’s probably not going to go over well as the next suggestion for book club. But I highly recommend it for the informed reader who wants to dig deeper into the culture of the early church. And I plan to incorporate Cohick’s research into some of my own work as I try to bridge that gulf between the curious ordinary Christian reader in the pews and the academic life.
Share on Facebook Tweet Widget