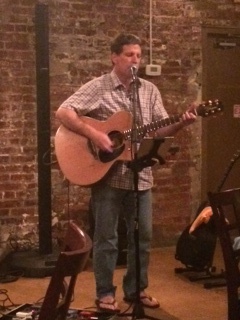 Back in the day, I owned a pretty awesome coffee café in downtown Frederick, MD. We had all kinds of cool stuff going on, but one thing that really drew in a crowd was the live entertainment. And Andy Carrigan was one of the favorites. Andy was just a cool guy, a dad who worked fulltime for the Board of Education, but also could entertain a room with covers from Eric Clapton, Paul Simon, The Beatles, James Taylor, and many more classics.

My younger brother and sister worked for me and the coffee shop had an open kitchen in the middle of the café. So while Andy was performing and all eyes were on him, Luke, Brooke, and I would do what we could to try and distract him, mess him up, and make him laugh. He'd be playing along, and when we saw his eyes come our way, we would duck behind the counter, and slowly stand back up with funny faces. We would make signs that said something nonsensical and hold them up. We'd do some crazy dance to his tune, all the while pumping out espresso drinks and making Panini sandwiches for the unassuming customers. Sometimes it worked. Whether we made Andy crack or not, we all had fun. We loved what we were doing, and the our patrons knew it. In fact, many of them became our friends.

Fast-forward 15 years to this weekend. It was my husband Matt's birthday, and he suggested we go to The Main Cup for dinner. Now The Main Cup is one of my favorite places to eat, so I suggested that we go to one of his favorites for his birthday! But then Matt said, "Andy Carrigan is playing at The Main Cup tonight." That settled it.

So there we were having a couple of drinks, Matt of course ordering the predictable steak, medium-well, and me with the bomb salad, complete with fried goat cheese medallions and seared Ahi tuna, rare, when Andy recognized us. We caught up a little and he got to playing. Some things had changed. Andy now uses an iPad instead of a music notebook, he brings an extra guitar so he doesn't need to retune for Neil Diamond, his kids are now adults, and he's no longer with the Board of Ed. I found it a little odd that he drinks wine while he plays instead of beer. But mostly Andy was exactly the same: 501 jeans, flip flops, and just really good at what he does.

As he opened up with a JJ Kale song, I thought about vocation. Andy has a fantastic voice, plays the guitar like a champ, and just has that relaxed, chill presence on stage. I don't think he's ever tried making a CD or touring big. He does coffee shops, bars, and trendy restaurants. He doesn't try to change his image or music for the younger crowds who are now drinking age. He does the tried and true. And he still does it with the passion Matt and I loved 15 years ago. This is Andy's second job, per se---his evening gig. And his wife was at a table with some friends, singing along to some of her favorites.

Andy knows how to use his passion and his gifts well for his fellow neighbors, whether that relates to the busy married couple who needed to get out for a night, his wife and kids, or the people serving the drinks at the restaurant. He doesn't have a selfish attitude for his own glory. He's not trying to insist on being a rock star because he's talented and loves music. Andy has found his niche and serves in it well.

I just love it when people serve their neighbor with joy and thankfulness, whether it is the doctor, the mom, the weekend entertainer, or the waiter. And I was thinking about how Matt and I were surrounded by people this weekend who do just that. This is always a busy season for us. As much as we need those nights to get out and enjoy one another, it is another thing to squeeze it in the schedule while bumping something else out. But it was so worth it. We were served well by others in their vocations, and as Gene Veith likes to encourage us in his writing, God is hidden in our vocations. Our night out affirmed what Veith reminds us of in his book, God At Work:

...vocation is played out not just in the extraordinary acts---the great things we will do for the Lord, the great success we envision in our careers someday---but in the realm of the ordinary. Whatever we face in the often humdrum present---washing the dishes, buying groceries, going to work, driving the kids somewhere, hanging out with our friends---this is the realm into which we have been called and in which our faith bears fruit in love. We are to love our neighbors---that is, the people who are actually around us, as opposed to the abstract humanity of the theorists. These neighbors constitute the relationships that we are in right now, and our vocation in for God to serve them through us. (59)

Recognizing this, and being served by others so well in their ordinary vocations, motivated me to get back into my ordinary callings and serve my neighbors with renewed vigor. And it made me thankful for God's economy. Because as Veith put it so well, "When God blesses us, He almost always does it through other people" (14). He makes us all kind of like mini rock stars in that way.