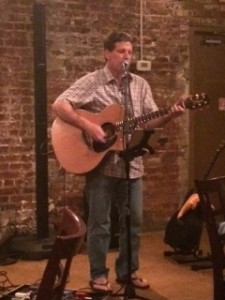 Back in the day, I owned a pretty awesome coffee café in downtown Frederick, MD. We had all kinds of cool stuff going on, but one thing that really drew in a crowd was the live entertainment. And Andy Carrigan was one of the favorites. Andy was just a cool guy, a dad who worked fulltime for the Board of Education, but also could entertain a room with covers from Eric Clapton, Paul Simon, The Beatles, James Taylor, and many more classics. My younger brother and sister worked for me and the coffee shop had an open kitchen in the middle of the café. So while Andy was performing and all eyes were on him, Luke, Brooke, and I would do what we could to try and distract him, mess him up, and make him laugh. He'd be playing along, and when we saw his eyes come our way, we would duck behind the counter, and slowly stand back up with funny faces. We would make signs that said something nonsensical and hold them up. We'd do some crazy dance to his tune, all the while pumping out espresso drinks and making Panini sandwiches for the unassuming customers. Sometimes it worked. Whether we made Andy crack or not, we all had fun. We loved what we were doing, and the our patrons knew it. In fact, many of them became our friends. Fast-forward 15 years to this weekend. It was my husband Matt's birthday, and he suggested we go to The Main Cup for dinner. Now The Main Cup is one of my favorite places to eat, so I suggested that we go to one of his favorites for his birthday! But then Matt said, "Andy Carrigan is playing at The Main Cup tonight." That settled it. Read more.
Share on Facebook Tweet Widget