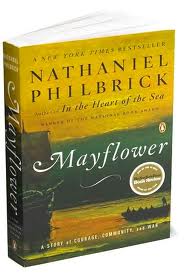 With Thanksgiving in two weeks, I thought I'd share this excerpt about the first Thanksgiving from Nathaniel Philbrick's great book, Mayflower.

We do not know the exact date of the celebration we now call the First Thanksgiving, but it was probably in late September or early October, soon after their crop of corn, squash, beans, barley, and peas had been harvested. It was also a time during which Plymouth Harbor played host to a tremendous number of migrating birds, particularly ducks and geese, and Bradford ordered four men to go out “fowling.” It took only a few hours for Plymouth’s hunters to kill enough ducks and geese to feed the settlement for a week. Now that they had “gathered the fruit of our labors,” Bradford declared it time to “rejoice together…after a more special manner.” The term Thanksgiving, first applied in the nineteenth century, was not used by the Pilgrims themselves. For the Pilgrims a thanksgiving was a time of spiritual devotion. Since just about everything the Pilgrims did had religious overtones, there was certainly much about the gathering in the fall of 1621 that would have made it a proper Puritan thanksgiving. But as Winslow’s description makes clear, there was also much about the gathering that was similar to a traditional English harvest festival—a secular celebration that dated back to the Middle Ages in which villagers ate, drank, and played games. Countless Victorian-era engravings notwithstanding, the Pilgrims did not spend the day sitting around a long table draped with a white linen cloth, clasping each other’s hands in prayer as a few curious Indians looked on. Instead of an English affair, the First Thanksgiving soon became an overwhelmingly Native celebration when Massasoit and a hundred Pokanokets (more than twice the entire English population of Plymouth) arrived at the settlement and soon provided five freshly killed deer. Even if all the Pilgrims’ furniture was brought out into the sunshine, most of the celebrants stood, squatted, or sat on the ground as they clustered around outdoor fires, where the deer and birds turned on wooden spits and where pottages—stews into which varieties of meats and vegetables were thrown—simmered invitingly. In addition to ducks and deer, there was, according to Bradford, a “good store of wild turkeys” in the fall of 1621… The Pilgrims may have also added fish to their meal of birds and deer. In fall, striped bass, bluefish, and cod were abundant. Perhaps most important to the Pilgrims was that with a recently harvested barley crop, it was now possible to brew beer. Alas, the Pilgrims were without pumpkin pies or cranberry sauce. There were also no forks, which did not appear at Plymouth until the last decades of the seventeenth century. The Pilgrims ate with their fingers and their knives (117-118).

I’m guessing they didn’t get to watch the football games either. And I bet it was a lot harder to loosen those big Pilgrim belt-buckles after a meal like that! But I digress. This is a really great book that was awarded “One of the 10 Best Books of the Year” by The New York Times Book Review. And rightly so, it is a page turner of historical narrative genre. Philbrick greatly surpasses his subtitle, A Story of Courage, Community, and War. Aside from debunking many of the candied teachings we were given growing up about this Pilgrim community and their relationship with the Native Americans, Philbrick demonstrates the complexities and tensions involved in trying to live by your convictions while basically fighting for survival. In this fifty-five year  history of Plymouth Colony, one thing that stands out is an observation Philbrick gives in his Preface: “I soon learned that the real-life Indians and English of the seventeenth century were too smart, too generous, too greedy, too brave—in short, too human—to behave so predictably” (xiv).  Therein lies the sweet potato pudding of total depravity.

(This article was first posted on Housewife Theologian on Thanksgiving, 2011.)