The Female Voices in Scripture

Aimee Byrd
November 10, 2016
I am currently reading a fascinating book, Gospel Women: Studies of the Named Women in the Gospels, by Richard Bauckham.  In it, he makes the case that biblical feminists are wrong in regarding the canon of Scripture “as a hopelessly patriarchal construction.” There is so much to mine out of his self-described painstaking historical work in this book.  One thing I really 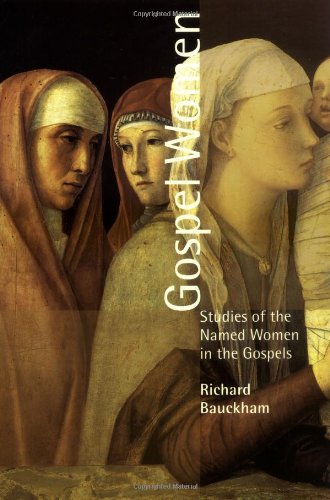 appreciate is the overarching theme that the named women in the gospels and the Scriptures as a whole are not merely tokens thrown in as props, accidental vestiges that somehow slipped through the canonical process without getting suppressed, or a patronizing general recognition to the contribution of women. His work respects “the fact that these women and their stories are remarkable for their particularity, rather than for their typicality or representativeness” (xix).
Throughout Scripture, we get snap shots from a woman’s perspective and experience, which is strange to say considering its male writers. Bauckham brilliantly introduces the idea of “gynocentric interruption of the dominant androcentricity of Scripture” in his first chapter The Book of Ruth as Key to Gynocentric Reading of Scripture:
Andre Brink’s novel The Wall of the Plague is written in the first person. The novelist is a male Afrikaner, the “I” of the narrative is a “coloured” (mixed race) South African woman. The thoroughgoing adoption of a female character’s perspective is intensified by vivid accounts even of distinctively female physical experience. But in the concluding short section of the novel the voice changes.  The woman’s South African white male lover speaks, and in the last two pages of the work reveals that he, not she, has written the story, as an attempt to “imagine what it would be like to be you.” As he approaches the task of writing the narrative the reader has just completed, he fears failure: “how can I, how dare I presume to form you from my rib?...To do justice to you an essential injustice is required. That is the heart of my dilemma. I can never be you: yet in order to be myself I must imagine what it is like to be you.” By this ingenious device of two levels of fictional authorship, the real author distances himself from the attempt he has made to imagine what it is like to be this woman. It is, after all, only a white male’s attempt to imagine what it is like to be a mixed-race woman. But readers have known this all along. How does the final revelation function for them? Is it the author’s bid to preempt their charge that he has not been fully successful? More seriously, what it does is to acknowledge, within the imaginative world the novel has created, the readers’ consciousness that behind the female voice lurks the male author…as it is, the revelation draws this knowledge into the world of the novel itself and makes into an inner-textual reality the tension between extra-textual knowledge and world that they have never entirely been able to escape. (2)
Likewise, Bauckham shows us that in Ruth we have the female voice, an Israelite woman’s perspective on ancient Israelite society, until the last few verses.  “Thus the book of Ruth, its conclusion tells us, is the kind of story that official, masculine history leaves out.” Bauckham goes on to highlight other gynocentric interruptions in Scripture, where the female voice dominates, not to compete with the man’s, but to complement it, exposing “the narrative as pitifully inadequate in its androcentric selectivity” (11). The female voice in the Song of Songs highlights the mutuality of the lovers. The book of Esther has a predominately female voice. Even in parts of Genesis we see the matriarch voices interrupting the more dominant perspectives of the patriarchs, “throw[ing] light on their androcentric contexts. This will occur in different ways, depending on whether the women are, like Deborah, historically exceptional, in the sense that probably few women played such roles historically, or, like Hannah, textually exceptional, in the sense that they make visible what is normally invisible in the texts” (13).
As you can see, this book is about more than the named women in the gospels! But he does get there, making some fascinating connections along the way. Next week, I hope to highlight one of those connections, between Rahab and the Canaanite woman who is healed in Matthew 15:21-28.
But Chapter One was such a breath of fresh air. Often, I am corrected when I speak of a woman’s perspective. Even Dorothy Sayers makes the argument downplaying such a thing as a feminine perspective as just the perspective of a fellow human being. And while I’m with Sayers partly here, especially in her emphasis that women should not have to deal with constantly being assessed by our femaleness, I do think that our contributions and even our presence as females offers a multifaceted asymmetrical balance when centered on truth. We are adding more than just the perspective of another human being, but not less. We see this missing both when we are stereotyped and when we are absent altogether.
And so later in the book Bauckham refers to women as active traditioners in the handing down of the faith. He rightly concludes his first chapter affirming the purposeful inclusion of these gynocentric texts. “Rather than viewing these texts as surprising survivors of the attempt to suppress such literature, we may reasonably suppose that the importance of women in the grassroots process of canonical selection led to their inclusion precisely as women’s literature, in order to counterbalance the androcentrism of the rest of Scripture” (16).
Share on Facebook Tweet Widget