Subverted--How I Helped the Sexual Revolution Hijack the Women's Movement 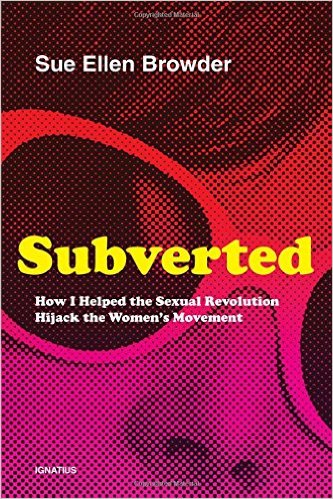 Today, Books at a Glance posted my review of a book I wish everyone would read. I posted a reading reflection from this book several weeks ago about propaganda masquerading as fluff, in evangelicalism, particularly in the women’s section of the Christian bookstore. Subverted is both a page-turner and an eye-opener. Here’s a portion of the review. Be sure to click on the link at the end to read it in full:
This is one of those books that got me making noises while I read it. Like a good meal, where you are just compelled to express “mmm’s,” and comments about the flavors and combinations of food, I read Subverted with both gasps and chuckles. This book is an eye-opener. Sue Ellen Browder kicks off her book apologizing that she has no good justification for the role she played in promoting the sexual revolution, as we know it today. She was duped herself, and yet takes responsibility for believing in propaganda over actual truth. And so she explains, “In the beginning, the women’s movement and the sexual revolution were distinctly separate cultural phenomena” (11).
Then Browder tells the story of how a movement that began with the wonderful goals to provide equality for women in the workplace, education, and domestic rites was subverted by another movement that deceptively promotes liberation by means of sexual promiscuity and abortion. Browder basically perpetuated this sabotage as a writer for Cosmopolitan Magazine in the 70’s–80’s. I have to say, even being the cynic that I am, I was shocked to hear about how Browder graduated from journalism school with all the idealistic fervor to be a good investigative reporter, landed her dream job to work for the glitzy Cosmo culture, and was immediately taught to make up sources and stories, complete with fictitious experts, creating the illusion of the life of the “Cosmo girl” persona. They flaunted the life of single, sexually uninhibited, aggressive, career women who supposedly were living the dream that was to be sold to all the so-called enslaved women out there.
Most of us are familiar with the name Betty Friedan as a leader of the women’s movement, made popular by her infamous book, The Feminine Mystique. And I would say many conservative Christians place much of the blame on her for feminism gone wrong. But Browder elaborately demonstrates how it isn’t that black and white. Freidan wasn’t originally a supporter of the sexual revolution and was repulsed by the images and messages Cosmo promoted. So how did a woman who valued motherhood, wanting to pave a way for moms to not be discriminated against in the workplace, end up becoming such a pivotal person in the sexual revolution? Why would she add a clause that is opposed to motherhood, the repeal of anti-abortion laws, in the National Organization of Women’s package of “women’s rights”?
Browder demonstrates how the behind the scenes manipulation and influence of a name that we are not familiar with plotted the course that Freidan foolishly helped to pave. “What happened between the closed doors between Larry Lader and Betty Friedan would misguide my thinking in such a way that it would change my whole life and the lives of millions of other Americans” (48).
Read the rest here.
Share on Facebook Tweet Widget