Renee of France and John Calvin---Friends to the End

Aimee Byrd
May 3, 2017
The thing I really appreciate about Simonetta Carr is that she likes to hang out a little in the uncomfortable spots when writing about history. Her whole book on Renée of France is about a 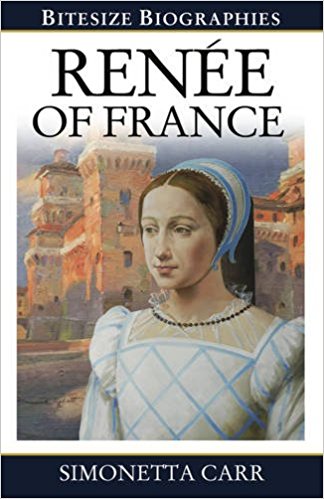 Reformation figure who was “difficult to categorize”:
For some, she was a devoted daughter of the Church of Rome, misled and deceived by John Calvin and other reformers. For others, a heroine of the Reformation, who kept her faith---with the exception of one painful lapse---in spite of fierce persecution. Some, emphasizing her complaints to Calvin in her last letters, have described her as a fierce ecumenical spirit. (14)
In answering this question of who Renée of France really was, Simonetta Carr gives a bite-sized biography, a “brief look at the life of a woman who made difficult choices and asked stimulating questions---someone like most of us, often baffled by uncertainties, resisting changes, stubborn, and frustrated” (16). It is a great little read which I recommend. But rather than give you a summary or review, as it’s a short book that I encourage you to read for yourself, I just wanted to reflect on something that stood out to me in Renée’s story. And that is my take-aways from the intimate correspondence between Renée and John Calvin.
One reason it stood out to me so much is because all of the sexual tension in the contemporary church. I’m constantly seeing articles about whether women and men should text one another or have a business lunch in public. Renée was in a difficult marriage, so that one could even say she was vulnerable. Duke Ercole II was not happy with his duchess. She was continually stirring up political controversy as the infamous “patroness of banned or endangered Protestants, who were often employed in her service in different capacities”(45). She wasn’t exactly what the church would uphold as a submissive wife.
There isn’t a lot of information of Calvin’s visit to Ferrara, Italy. There isn’t a precise date or duration of his stay or an account of his purposes for his first visit with Renée. He did use a different name, Charles d’Esperville. And he made quite an impact on Renée and her court. Carr points out just how much they had in common, separated by only a year in age and both struggling to live away from their homeland of France. This visit was the beginning of a fruitful friendship of correspondence for the rest of their lives. There’s no romantic scandal here. There is pastoral guidance. But even more than that, Calvin opens up about his personal life with Renée in ways that are uncharacteristic of him. They were friends.
Calvin knew Renée’s influence to advance the true gospel as a French princess and Italian duchess. But Renee stood out to Calvin, and he shares personal reasons for his correspondence:
I have observed in you such fear of God and faithful disposition to obey him, that even without considering the high rank he has given you among men, I have been able to appreciate the virtues he has conferred on you and would consider myself accursed if I did not take advantage of those opportunities to serve you. (35)
He took great care to present Renée with clear teaching on the essential doctrines, as she was up against false teachers in the Este court. As she was going through persecution brought on by her own husband, wavering in her faith, Calvin continues to strengthen and encourage her with gospel truth. He spoke graciously to her in her weakest moments. He was a constant source of counsel for her, in the influence she had and the choices she was making regarding her personal life. Renée didn’t always take Calvin’s advice. She pushed back quite a bit. But there was a mutual respect creating a friendship comfortable with open disagreement and growth. It wasn’t one-dimensional. Calvin also listened to Renée’s concerns and gained from her perspective.
This correspondence lasted all the way to Calvin’s death. Less than a month before he died, Calvin wrote Renée affirming his high admiration for her virtues, asking forgiveness for dictating the letter to his brother “because of my weakness and the pain caused by several illnesses: breathing impediments, [kidney] stones, gout, and an ulcer of the haemorrhoidal veins, preventing every movement with the potential to give some relief” (96). Carr pointed out how uncharacteristic it was for Calvin to talk about himself in such a detailed way. This ended 27 years of correspondence between the two, “the longest and most pastoral correspondence the Reformer ever kept with a noblewoman” (107). Carr points out how Calvin communicated to Renée as he would to a dear friend.
This is because Renée was more than auxiliary support to men. Calvin didn’t reduce her to one role as the Duke’s wife. She was a sister in Christ with a soul and a mind of her own. She wasn’t even an easy friend, but one who asked hard questions, openly disagreed, and took risks. They were sharpening friends for one another, which produced fruit lasting longer than their lives on this earth. Carr’s book telling their story is one of those fruits.
Share on Facebook Tweet Widget