Providence Is More Than A Doctrine

Aimee Byrd
March 28, 2014
We currently are going through Genesis in my women’s Bible study class at church. This week Joseph entered the scene. As we were discussing his integrity and character, my teacher read this quote from James Montgomery Boice’s commentary on Genesis:

In the chapters of Genesis that follow, nothing bad is ever said about Joseph. In fact, he is one of the few major characters in the Bible—Daniel is the only other—of whom this can truthfully be said. (971)

Wow. That got me wondering. We discussed how this obviously doesn’t mean that they were without sin, or not in need of a Savior. This is exactly what made me wonder, first, about how God is so blatantly open with the sins of his people. In the same lesson we read about some sinful acts of Judah and Tamar, who are both in the genealogy of Christ, that may have been convenient to leave out. This is the line that Christ came from? But it’s an accurate depiction of the depravity of man, the sovereignty of God, the compassionate mercy of the Father, the magnitude of the work of Christ, and our need for his Spirit to affect it in us. There is only One worthy of our worship. And secondly I wonder, why then would God have these two men painted in such a positive light? We see how their lives pointed to Christ in such elaborate fashion. But I think that both Joseph and Daniel teach us a great deal about how a Christian is to trust in the Lord. When we read about them in Scripture, we are encouraged to obey. Although they were sinful humans, they could still depend on God in obedience and prevail. Their lives also cause us to wonder at the providence of God. There were so many circumstances where these two godly men must have been tempted to sin to avoid severe affliction. Providentially, of course, I just so happened to be reading about God’s providence later on the same day from my latest date, Michael Horton’s Calvin on the Christian Life. It was so timely to read about after reflecting on the lives of Joseph and Daniel: 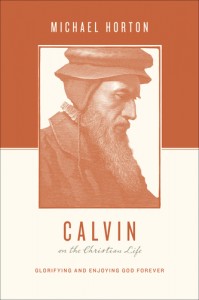 Calvin never treats God’s providence as merely a doctrine, but as an anchor in life’s storms. Like all doctrines, its aim is not to satisfy our intellectual curiosity but to assure us practically of God’s faithfulness even when we cannot see it. Far from ignoring tragedy in Stoic bliss, Calvin acknowledges that “the dreadful disorder that devastates man’s life vehemently obscures the order of God’s providence.” Though the sun shines, the clouds may obscure it. Our experience is real, but it is not competent to judge God’s ways. Amid our anxieties, “we ought to be fully persuaded that it is God’s peculiar office to come to the aid of the wretched and the afflicted.” Again, there is no place for passivity in this account: because God is at work, we can do ours. In fact, God performs his work through us. Therefore, “they who know that God nurtures us until death or even until after death ‘are not so distracted by fear as to cease from performing their duty.’” Those who aim to subvert the doctrine of providence even a little deprive God’s children of their true contentment and harass their souls with wretched unrest.” (77-78)

You see this warning played out in the lives of Joseph’s brothers. It seemed like the more they tried to work against God’s providence, the more evident it was that they were actually working it out. Joseph put it best, what they meant for evil, God meant for good (Gen. 50:20). The lives of Joseph and Daniel are a great encouragement to prevail through obedience and trust in God’s Word. There will be suffering, but God’s ways are good. I can’t say that I chose affliction over sin when I should. And that is to my shame. But the lives of Joseph and Daniel point to One who is even greater, Jesus Christ. Though we didn’t read about it, we know that Joseph and Daniel were sinners. But Jesus, who is the true first-born, true shepherd, envied by his brothers, sold for the price of a slave, condemned to die, the One who was put into the tomb instead of the lion’s den, and sealed with a stone, came out, defeating death, was vindicated because of his righteousness; and because he took on our sin, he offers his own righteousness to his people. That is something neither Joseph nor Daniel could give. Because of this, we have an even clearer picture of how God works all things together for the good of those he has called according to his purpose (Rom. 8:28-29). We will become like the Son! And as mysterious and unfathomable as it still is, it is much more than an intellectual acknowledgement to acquiesce. It is my confession of hope to which I will hold tightly. Christ held on while he was on that cross. Despite the worst affliction imaginable, he never sinned and he never let go. Now, he is holding on as our anchor in heaven, interceding on our behalf before our great Father. How can I be passive, knowing that? What shall I fear?
Share on Facebook Tweet Widget