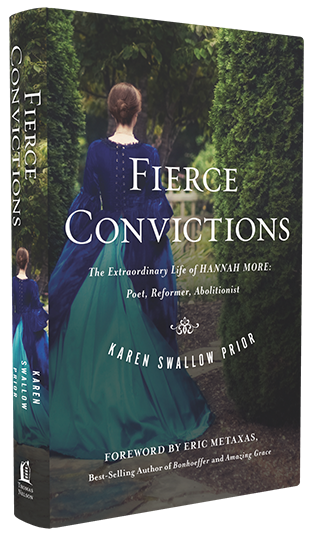 So this is interesting. This weekend I began reading Karen Swallow Prior’s fantastic book on the life of Hannah More titled Fierce Convictions, and I stumbled upon a paragraph lamenting the quality of women’s reading material in the mid 18th century. I could have written something similar today:
Even in their reading, More charged, too many women were prone to superficiality. In search of a passing knowledge of books and authors, many read anthologies of excerpted works that selected the brightest passages but left out deeper contexts---eighteenth-century versions of Reader’s Digest were quite popular. More cautioned against a habit she viewed as cultivating a taste only for “delicious morsels,” one that spits out “every thing which is plain.” Good books, in contrast, require good readers: “In all well-written books, there is much that is good which is not dazzling; and these shallow critics should be taught, that it is for the embellishment of the more tame and uninteresting parts of his work, that the judicious poet commonly reserves those flowers, whose beauty is defaced when they are plucked from the garland into which he had so skillfully woven them.” (23)
Immediately, you may notice the irony of me now offering you a bright passage to indulge in without having to read the book. And if you agree with me that this is indeed a bright passage, I am relieved. But I do commend you to read the whole book so that you can take in the entire beautiful garden. It’s one of those books that you just don’t want to finish because it is such a great companion. But I do offer you this plucked flower for the purpose of reflection.
Although so much has changed, so much has remained the same. In More’s time, women were not afforded the same education as men. It was unusual for a woman to have a well-rounded education. Those who were able to get an education were to learn in the arts, instruction on manners, and maybe a foreign language to help them catch a man, or to be of good company for a brief conversation with a man. They were not to contribute anything intelligent to the conversation. Hannah More protested that these were mere “ornamental accomplishments” that were very superficial in nature.
While I read these pages with a gratitude that I do not live in such a sexist age, I find myself enveloped in much of the same superficiality when it comes to what many women in the church (and men too) are reading. I can’t tell you how many wonderful friends I have, friends who actively read and post and share on Facebook, who will unashamedly tell me that they don’t read books because they aren’t “readers.” I find this preposterous. Of course they’re readers. They’re sound-bite readers, gatherers of plucked flowers that die in three days. They only want what is quick, interesting, and handfed.
But they refuse to see the garden.
And so, just as More observed, “’There are more who can see and hear, than there are who can judge and reflect’” (22). We have access to an education our ancestors could barely dream of, technology to bring much of it to us at our fingertips, and a plethora of books! We have a feast of wisdom and talent to read, and too many women are junk food binging (changing metaphors here). The result is a loss of discernment of a good meal, and an insatiable sugar tooth.
It’s all so ironic. More and more women are investing time and effort to homeschool their children for the purpose of teaching under a Christian worldview. This is commendable. But while many are busy combatting secular education, I find a significant portion of adult women are lacking the discernment to be good readers themselves. I don't want to target home school moms here or offend their vocation in general. Many moms work hard to provide an education for their children. I'm aiming to poke at ALL women in the church, even those who appear to be dedicating their lives to education. Women often get pulled in by the same sentimentality that we fear our kids will be snookered by in secular ideologies. And so when they finally decide it’s time to read a “good book” they often choose a popular Christian title that appeals to their emotions, unaware that mysticism and other bad doctrine has snuck right in the back door.
And what about good writing? This also worries me. Shock and verbal emoticons seem to catch our attention, so authors are spinning out tweetable lines. It’s becoming harder to keep the reader’s attention because the necessarily plain good lines, the ivy, tall grasses, and evergreens that border the flowers, are no longer valued.
Which brings me back to the title, Fierce Convictions. It took aggressive convictions to change the way people think about education for women. We take all that for granted now. But maybe we should have some fierce convictions of our own about the quality of what we are reading now. Much has changed, but unfortunately, much has remained the same.
Share on Facebook Tweet Widget