Aimee Byrd
November 16, 2017
Yesterday I shared an excellent article Katelyn Beaty wrote for the New York Times entitled A Christian Case Against the Pence Rule. And whenever the Pence Rule, which is associated with the Billy Graham Rule of not eating or meeting alone with a woman, is discussed on social media you can see its polarizing effect. It has regained traction as numerous Hollywood sex scandals are exposed. For example, Beaty quotes conservative radio host and blogger Erick Erikson, saying, “The very same left-wing activists and Hollywood stars now running away from Harvey Weinstein were assailing Mike Pence for having a rule of not dining alone or taking meetings alone with women,” insinuating that if everyone would just follow the Pence Rule none of this will happen.
While Beaty gives a nod to the motives of many who promote and adhere to the Pence Rule in one form or another, she denies it’s effectiveness:  “The Pence rule is inadequate to stop Weinstein-ian behavior. In fact, it might be its sanctified cousin. It’s time for men in power to believe their female peers when they say that the rule hurts more than helps.” Abusers are always going to find ways to abuse, but Christians are called to something higher than these extra-biblical rules. We are called to uphold godly behavior and promotion of holiness with everyone we interact with. We are called to a holy communion with God that also overflows into a holy communion with one another. We do this as sexual beings, but our sexuality doesn’t merely express itself in the physical love making that a wedded couple exclusively shares. Our sexuality also expresses itself in brother and sisterhood as we relate to everyone.
So, imagine how reductive it is for a woman to see a Tweet from a popular pastor such as this one, with other popular pastors retweeting in approval:

Pence Rule: Case by Case Dept. I could see giving a woman a ride. To the hospital. If the bone was sticking out -- https://t.co/O9bfVBbGc3

What does this say about a woman such as myself? It insinuates that I’m such a threat to a man’s faithfulness and a pastor’s reputation that I’m barely worth the risk of a ride to the hospital. I am in need of some good Samaritans! This parable particularly comes to mind because the religious people in it didn’t want to get polluted by the dying man. Comments like this tweet insinuate this same kind of pollution in association with women. As pastor Sam Powell put it, such harsh boundaries pretend like “fornication is like the flu, and you accidently catch it if you happen to be close to a woman.”  Or maybe it is a Christian’s reputation that is polluted. (Sam also has a great article debunking the “appearance of evil” here.) Either way, Jesus calls us to be like the Samaritan, whom had nothing to lose because he was already considered polluted, or ceremonially defiled, so he was free to properly care for another human being in need. This is how Christ loved us. This is how we should love one another. Powell bids us, “Take up your cross with him; despise the shame. Make yourself of no reputation. ‘Let this mind be in you, that was also in Christ Jesus.’
“Perhaps it is time that we start thinking about love, rather than reputation.”
Stealing Unearned Virtue
Some of the comments defending the Pence Rule under the link I shared are emotionally charged and hurtful, resorting to the conversation-closer of name-calling. This is what Alan Jacobs calls commitment to non-thinking. In them, Beaty is called brain dead and her article is referred to as a moronic idea, full of lies, which like the New York Times, should be ignored. Those who defend the Pence Rule imagine that those who critique it are either extremely naïve or don’t value faithfulness in marriage. I would like to suggest that those who viscerally defend the Pence Rule are falling under what Dietrich von Hildebrand, in his book In Defense of Purity, calls the spell of negative sexuality and are falling short of apprehending purity. After all, one can 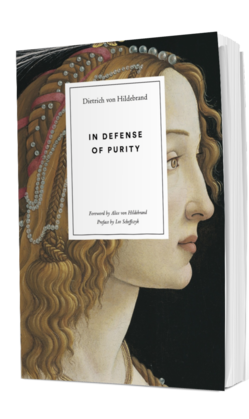 avoid having an affair and not truly embrace purity. While faithfulness in marriage is expected, it is not necessarily virtuous if it’s a response to a perceived self-importance, the result of an unsensuous temperament, or due to lack of opportunity. As von Hildebrand teaches, purity is a virtue as it treasures “free coopera[tion] in its production,” and as it “involves a habitual response to some value.”
So the question to ask is what is your perception of value? Is it your career or ministry, therefore you must guard any appearance that may give people ammunition against your image? Is your value the perfect marriage, even at the expense of valuing others? (And what kind of marriage is it when you have to reduce all others of the opposite sex to value your spouse?) Or is your value to “live, so to speak, in the sight (in conspectu) of God’s purity, the fountainhead of all purity, and [to] respond to it with the permanent and habitual assent of his will” (43)? Because purity is supernatural. “For from Him and through Him and to Him are all things. To Him be the glory forever. Amen” (Rom. 11:36).
Von Hildebrand insists on purity as a positive virtue that “always lives in an attitude of reverence for God and his creation, and therefore reveres sex, its profundity, and its sublime and divinely ordained meaning” (40). The sexual gift in marriage is therefore positively embraced and treasured so as not to be reduced to a base instinct. “The moment I treat physical sex as something complete in itself and take no account of its profoundest function, namely in wedded love, I falsify its ultimate significance and become blind to the mystery it contains” (7). This reverence for God and high view of sex also promotes a corresponding response to value others in their dignity as people made in the image of God.
So the pure person does not behave prudishly in producing an “oppressive atmosphere” toward others, but “is distinguished by a limpid radiance of the soul” (41). Rejecting the negative value of impurity or sexual transgression should never lead to rejecting the value of another person. The virtue of purity rightly orients sensuality before God and others. Those who are oppressive to this beauty “miss the peculiar freedom of the pure; the unconfined spirituality, the transparence, the radiance which is theirs alone. On the contrary, they are in bondage, their spirit is opaque and transmits no clear light, and the hang about every hole and corner in which sexuality lurks unbeknown…Since they have never uprooted and overcome this attraction, nor even struggled against it in open combat, every other department of their life is infected and poisoned by this disposition” (24).
So while it may seem safe to impose rules that separate ordinary encounters with the opposite sex, it isn’t the virtue of purity. It is actually over-sexualization, or as Beaty calls it, the sanctified cousin of Weinstein-ian behavior. No, the virtue of purity perceives and responds to the holistic value in human beings.
We are called to Christian love and fellowship as brothers and sisters. That means we promote one another’s holiness. It also means that we take sin seriously as well as our own ability to fall into it. This doesn’t call us to “the false modesty of the prude” but to a “sincere humility” (42). Therefore, rather than extra-biblical rules, we are to do the hard work of rightly orienting our affections and exercising wisdom and discernment with others.  We don’t think of a bunch of reasons to be alone with the opposite sex, we don’t’ naively assume everyone is safe, and we don’t overestimate our own virtue. We live before God in every situation. And in this manner, we won’t scandalize ordinary acts of kindness and business such as serving someone by giving them a ride or coworkers sharing a meal in a public place.
Wikipedia defines pickpocketing as “a form of larceny that involves the stealing of money or other valuables from the person of a victim without them noticing the theft at the time. It may involve considerable dexterity and a knack for misdirection.” I see the Pence Rule as pickpocketing purity, stealing unearned virtue at the expense of another’s dignity. Although I think that many who uphold the Rule are the ones misdirected, wanting to exercise a virtue without noticing that positive work they need to put in.
Share on Facebook Tweet Widget