One Reason Men and Women Can't Be Friends: We Don’t View Each Other Holistically

Aimee Byrd
June 27, 2018
Friendship between men and women is a taboo topic in the evangelical subculture. It makes us uncomfortable. Apparently, we are all time bombs on the brink of having an affair—or of being accused of having one. Because of this, men and women often feel uncomfortable around each other, even in innocent contexts, and we impose strict hedges on behavior in order to avoid the threat of sexual impropriety.
Most of us instinctively know what constitutes sexual impropriety in conversation and action—but, due to influence from our overly sexualized culture, we tend to scandalize ordinary acts of kindness and business. It becomes suspect to give someone a ride, share a meal with a coworker in a public place, or text the other sex without copying our spouses or another third party. Prohibitions of these acts are couched in language of protecting our purity, honoring our spouses, or wisely avoiding the threat of temptation. Challenge any of these suggestions, however, and the language of danger is invoked. If these ordinary acts are dangerous, it must be downright foolish to use a meaningful term like friendship to describe a relationship between the 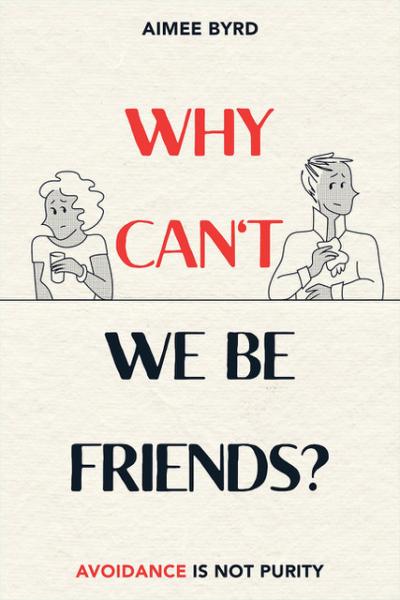 sexes.
Do ordinary acts of kindness and business give you anxiety? Have you been reluctant to introduce someone of the other sex as your friend? Even in something as simple as a conversation with someone of the other sex, there seem to be too many ambiguous factors. Am I holding eye contact too long? Oh no, I just laughed at his joke—is someone going to think I’m flirting? Is my body language sending the wrong signals? These can be noble questions in certain situations. However, if we view one another more holistically, they don’t have to be a common anxiety.
Distinction without Reduction
There are plenty of distinctions between men and women, and cross-sex friendships are different from same-sex ones. Let’s not pretend that this isn’t true! But distinctions are special qualities, and we should never be reductive about them. When we reduce others because of their physical assets or on the basis of ideas we’ve received from cultural expectations, we fall into objectifying or stereotyping men and women who are made in the image of God.
A healthy dynamic between men and women engages the whole person. In my family, I was raised with a proper understanding of distinction between the sexes without reduction. Having a brother helped me to understand an aspect of my own sisterhood and femininity that was distinct from what I learned about my sisterhood and femininity in my relationship with my sister. In all my family relationships, I had a sense that my mind, body, and soul were valued, and I thrived.
Society’s message, however, is for both sexes to follow our baser instincts. When Harry Met Sally is the cultural icon of this mindset—Harry representing every man, and Sally every woman. Sex is the endgame of all Harry’s friendships with women: he pursues friendship in order to get sex, or he dismisses women whom he isn’t interested in sexually pursuing, which is equally demeaning. When Harry tells Sally that men and women can’t be friends because the “sex part always gets in the way,” we Sallies read between the lines. Our holistic personhood is not valued—friendship is merely a conduit to sex. Man’s baser instinct overshadows anything else that matters. Savvy Sallies may as well accept the facts and maximize on this outlook by using their sexual appeal to get what they want. Reduced to objects of physical pleasure and consumption, women become a commodity.
Harry Burns isn’t the only one to blame. Decades before When Harry Met Sally came out, Sigmund Freud reduced all affection to erotic desire— to our genitals—meaning that every look, gesture, touch, and thought holds sexual motives. That sounds jarring and crude, but it is in our history, so we need to talk about it. Freud’s psychology still affects the thinking of our postmodern age. His explanation of maturity revolves around which psychosexual stage we’ve reached in life. These are genitally-oriented stages showcasing a male superiority, in which females go through an anxious stage of penis envy before reaching mature sexual identity. This view reduces friendship, whether it is same-sex or cross-sex, to role-playing for sexual gratification.
The church has accepted and semi-sanctified these reductive views: sexuality is good for landing a spouse, but it’s a barrier to friendship because men and women can’t possibly just enjoy each other’s company. We associate all intimacy with the bedroom, so we expect every meaningful interaction between a man and a woman to be laden with repressed sexual desire. That means that all intellectual, creative, entertaining, or conversational enjoyment with someone of the other sex needs to be fulfilled by our spouses. That’s an awfully heavy load for one person to bear!
Harry Burns isn’t interested in friendship with women because he can’t look at them as friends. The wider evangelical mindset doesn’t quite put it that way. Acts of friendship are viewed as “unnecessary temptation.” (What falls under the purview of necessary temptation, one wonders.) As one person responded to me, saying and doing are two different things. Saying that we should resist our sinful, base instincts and pursue pure friendships no matter the gender is a “‘good preaching but hard living’ bit of church-talk that isn’t especially helpful.” Sure, we’re told, friendship is biblical and sounds good, but it isn’t necessary and isn’t worth the trouble of fighting the sin in my own heart. Your body is a threat to me, and I must protect myself from you.
Of course, this is pitched as an act of protection for both parties. Men and women are reduced to a temptation and a danger to each other. Acts of friendship are all suspect; therefore it feels much safer for us all to keep them taboo.
But if friendship doesn’t matter, then a lot of other parts of our design don’t matter either. Viewing one another holistically means we will consider all our faculties that reflect the image of God—our minds, bodies, wills, emotions, and souls. All these need to be rightly ordered toward God in communion with him, because they all matter.
*This is an excerpt from Why Can't We Be Friends?
Share on Facebook Tweet Widget

Greater Works than the Son?