My Husband is a Total Idiot

Aimee Byrd
June 19, 2016
Seriously. I mean that in an endearing way. In fact, I hope I’m an idiot, and I think we need a lot more idiots in the church. So does Ted Kluck.
I hosted my book review club this Monday evening at my house. This is where we all read whatever book we want and come together to review it. It doesn’t have to be a Christian book, but it has turned out that all of us who attend are believers. So as we give our reviews everyone uses their gospel filter to analyze. With all the coffee and sugar that I pump us up with, we are cutting each other off, laughing, and having a great time (we probably don’t need the coffee and sugar for this, but at least we have something to blame it on).
Anyway, my mom reviewed this book by Ted Kluck and Dallas Jahncke called Dallas and the Spitfire. She said that she found it sitting around in her living room and she didn’t know where it came from. As she was reading it she realized that it was the perfect book for her husband, Rock. So now he is in the middle of reading it. That’s when I informed her that I gave that book to Rock for Father’s Day last year. Anyway, here is the excerpt she read that made me realize my husband was an idiot. Kluck was talking about his new “rock star” friend:
...he often referred to his good friends - the people with whom he had the most fun, laughs, etc. - as "idiots." He said it as a term of endearment, and that was obvious. For example, on Sunday when we were driving to church together, I was trying to describe a good buddy of mine. My new rock star buddy said, " He's as idiot, like us!" Exactly. 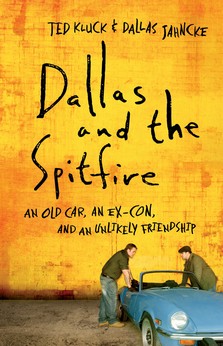 Friends, let me describe why being an idiot is important. First, it means that you're fun to be with because you don't take yourself too seriously and are not afraid to laugh at yourself. This is crucial. It means that when someone gives you a compliment, you just say thanks or, better yet, you make some wisecrack about it rather than saying, "It's only by His good Grace and in Him that I was ever able to even think about writing a book, because I'm a miserable wretched sinner and I want all the attention to go to the cross." For example.
Being an idiot means that while you work hard, you don't take your work too seriously. It means that you're not always on the lookout to "network" or "politic" or "synergize" your way to the top by making sanctimonious, suck-uppy comments to people who can help you get there. It means that you'd rather hang out with people who are fun than people who can move your career forward.
It means that you generally let unimportant things roll off and that you don't sweat the small stuff. It means that you're cool with occasionally telling a story in which you're not the hero and laughing at yourself and even the subculture that you hold nearest and dearest. You probably don't sign all of your correspondence with "Soli Deo_," or "In Him," or "Grace and Peace." It's just an email, man (119-120).
My husband, Matt, doesn’t always say the right thing. I fell in love with him because he’s an idiot. And once you find an idiot, you’ve got the real deal. If you are providentially blessed enough to have an idiot love you back, you know that they always will.
Not only does he not take himself too seriously, Matt won’t let me take myself too seriously either. If I get caught up in thinking I’m important, he gives me the look. Now I know what it means, “Honey, you're just an idiot, remember?” Oh yeah! If I slip out a big word in casual conversation, you can bet my idiot husband is going to use it all day long, in improper context just for fun, to help me remember that we are idiots.
In fact he and my step-father have an Idiot’s Day. This is their new affectionate term for Father’s Day after they had a fishing trip that went horribly wrong a couple of years back. The kayak trip that was much longer than they intended (supposedly) ended with the realization that the keys were in the truck parked at the beginning marker. With his tail between his legs, my idiot husband had to call me to wake the children up from their naps, put a note on the door in case our company arrived early, and leave to save the day. I brought a couple of sandwiches with me because I figured those idiots would be hungry.
*This was originally posted on Housewife Theologian on July 3, 2013.
Share on Facebook Tweet Widget