Foreword to Beyond Authority and Submission

Aimee Byrd
September 3, 2019
I'm excited to share the news that Beyond Authority and Submission, by Rachel Miller, is now available to order. MoS will air our prerecorded interview with her about the book soon. But since it's launch week, I wanted to share the Foreword to her book, which I was honored to write:
Rachel Miller is the perfect person to write this timely book that challenges the lens in which many in the church use to view the nature of men and women and their so-called roles in the church, home, and society. In the last thirty years, the church has been flooded with resources on biblical manhood and womanhood. I remember reading many of these resources when I first married, wanting to be a godly wife and to properly respond to the sexual revolution that is pervading our culture. I learned about some new movements in the church, such as complementarianism and egalitarianism, that worked to build a framework about what the Bible teaches regarding masculinity, femininity, and the contributions of men and women. These movements became polarizing for those who joined their councils, coalitions, and alliances, as their positions were taught as gospel truths. I found myself in an evangelical subculture that built a framework of authority and submission to describe the nature of men and women. Is this really what the Bible teaches? In looking for some fellow critical thinkers, I discovered Rachel’s blog, “A Daughter of the Reformation.” Her writing is 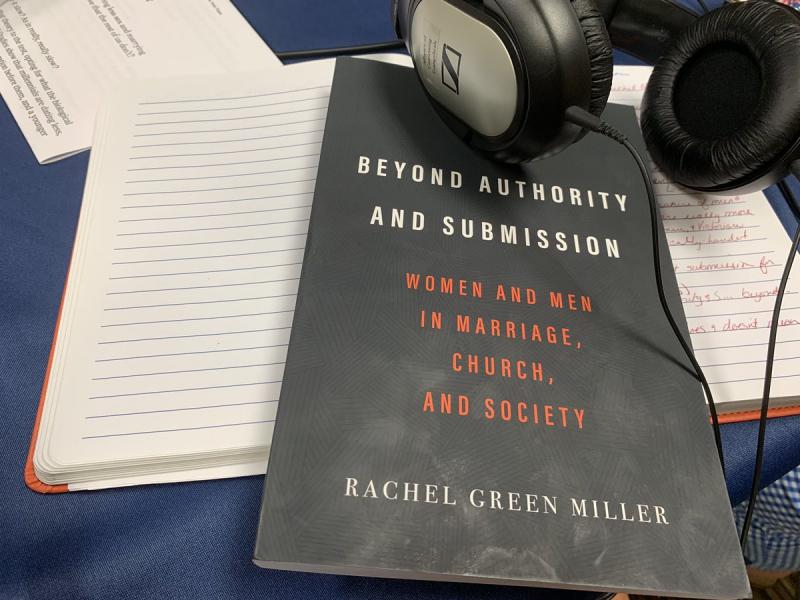 a breath of fresh air.
Rachel is a laywoman. Maybe you are wondering what qualifies her to write such a book when there are so many distinguished pastors and scholars who have written on the topic of biblical manhood and womanhood. There are several reasons why an informed laywoman like Rachel has much to contribute to this discussion. First of all, Rachel has firm convictions upholding ordination of qualified men in the church and husbands as servant leaders in their homes.  While not aligning with a movement, Rachel does want to contribute as a complementary, reciprocal voice in response to the many we have read and heard. So, she is what we would consider a reforming voice within her own camp. If complementarianism truly is complementary, it should value this kind of engagement. Published resources for the church are meant to be thoughtfully engaged. Most authors do not presume to be the final voice on matters such as these, but rather aim to offer their interpretation of pertinent Scriptural principles in hopes to move forward in a biblical understanding of the sexes. Rachel’s book is a sharpening response from the pew.
Secondly, Rachel has nothing to personally gain. She is not aligned to any organization that will boost her status or career by offering a biblical way to view men and women beyond authority and submission. In fact, in speaking against the grain of many of her peers, it is a brave endeavor. One reason why it is so difficult to have these discussions is because most of the authors are aligned to organizations in which their livelihood is dependent on not budging from their framework.  Since Rachel is an ordinary laywoman, a faithful Christian who upholds the confessions of her church, and is not on the payroll of parachurch organization, she has more of a freedom to write from the conclusions of her historical research and biblical convictions. Perhaps instead I should say that she has nothing to lose. But, like the subject she is writing on, it’s a little more complicated than that. Writing against the accepted grain in your own circles comes with a price. Rachel has counted the cost and cares enough about the way men and women co-labor together to write this book.
And third, Rachel has already proven to be a discerning and helpful voice for men and women in the church. Before the infamous Trinity debate that kicked off in 2016 , Rachel Miller was writing articles on her blog, challenging the orthodoxy of the prevalent teaching of the eternal subordination of the Son, and its sister teaching, the eternal subordination of women. Rachel has followed the doctrine on authority and submission in the godhead and between the sexes, challenging its biblical grounds, before many of the scholars or pastors in her camp would speak out. Thankfully, we are now seeing a renewal of focus and resources being published on an orthodox teaching on the Trinity.
I am thankful for Rachel’s further contribution of this book, examining whether some of the ideas of the nature of men and women and our relationships in the home, church, and society are biblical traditions that have been faithfully handed down or are ones the church has picked up from the Greeks, Romans, and Victorians. Are our assumptions biblical or cultural? What if, in trying to be a Christian voice in response to the sexual revolution of the culture, the church has inadvertently been arguing from a different secular position? Should our framework for men and women be authority and submission, or can we return these categories to their proper place, while recovering a lens of unity, interdependence, and service for both men and women?
Maybe Rachel didn’t foresee just how fitting it was when she named her blog “A Daughter of the Reformation.” She lives according to the Reformation confessions that she upholds. One of those cries is Semper Reformanda, the church is always reforming. We continually need to align our teachings with the authority of the Scriptures. This is something all readers should be able to agree with. I commend this book to you as a valuable contribution to the continuing discussion on the nature, relationships, and value of men and women, with the expectation that it will be a catalyst for fruitful, biblical reform.
Aimee Byrd
Share on Facebook Tweet Widget