Does a Mantilla Make Me More Feminine?

Aimee Byrd
February 24, 2015
I consider Luma Simms a friend. We aren’t close in the sense that we keep tabs on everyday life kind of stuff, but we have met in person, we have communicated online, and we have even talked on the phone about some pretty deep matters in the Christian life. So it saddened me to see that she has converted to Roman Catholicism. I did ask her about this surprise, and Luma graciously responded.
Since then, she has written some interesting articles that have perplexed me a bit. Her most recent, Why I Wear A Mantilla, had me asking some more questions. Although my correspondence with Luma is infrequent, I do consider this a friendly response. 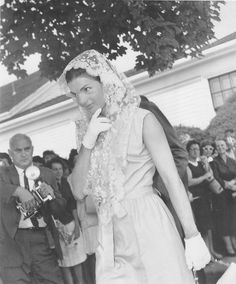 In her article for First Things, Luma opens saying that one of the reasons that she converted to Roman Catholicism was so she could wear a mantilla. She states, “The mantilla is a lace veil women have worn over their heads while worshipping God since the time of the New Testament Church.” But was it? While women did wear head coverings in the New Testament Church, the mantilla is a more recent, fashionable custom that originated from Spain and seems to have made its way into the west around the 1960’s. Women in the New Testament church were not wearing lace.
I do not believe that 1 Cor. 11:1-16 indicates that women today should wear head coverings in worship. Here is a good answer from the OPC website that offers several reasons why. And Luma does point out that the Catholic Church does not require women to wear a mantilla in worship, that it is not something she “has” to do, but rather something she “gets” to do. And she encourages other women to join her in this because it sends a message of our femininity. She asserts, “the covered head says, ‘this is a woman.’”
Does it?
Well, I guess it may in the sense that I’m not likely going to see a man worshipping with a mantilla (I know, it’s ironic that it’s called mantilla). But I do not believe I need to add something extra to display my femininity. And that is what I find odd about this argument. Luma laments with Neil Postman that our culture is now more image-centered than word-centered. And then she encourages us to wear a mantilla as a “visual expression of distinction between men and women.” Why would we add another image to express our womanhood? Why add to the image-centered proclivity?
And as she suggests, does my uncovered head exclaim, “this is a man”? No, of course not. A head covering does not have the same significance that it did in Paul’s time, and I don’t think a mantilla in particular has anything to do with my identity as a female or with resisting the rampant feminism of our time. And yet Luma believes the mantilla is both a statement and a righteous weapon for women in the church:
What area of life can be more foundational to rebuilding culture than the mass? And the most beautiful symbol of this complementarity on display during the mass is the mantilla.
I defy the sexual revolution and its destructive consequences. I fight it with every weapon it is righteous and Christ-honoring to use. I fight it with my mantilla.
Of course, as a Protestant I have much to disagree with here. But this argument reminded me of another recent article from Luma explaining that she was glad as a divorced and remarried woman that the Roman Catholic Church would not allow her to participate in Communion (she is currently pursuing a Decree of Nullity).
I would say one of the most beautiful symbols of the complementarity on display is when a pastor administers Communion. The Lord’s Supper pictures our head, Jesus Christ, nourishing his bride with his own body and blood until he returns. It also points to the great feast we will have on that approaching day. Here we have the Word preached, followed by the sign and the seal of that good news proclaimed.
But Luma is now excluded. Maybe a mantilla makes my friend feel more included in the worship service, I don’t know.
Like Luma, I also defy the sexual revolution and its destructive consequences. But I do not see the mantilla as a righteous weapon in that cause. I “get to” participate in the ordinary means of grace that God has promised to convey Christ and all his blessings to me in worship.
The mantilla does indeed make a statement. But I think it is a statement that identifies Luma with the contemporary Roman Catholic Church over any kind of statement of the complementarity on display, or as a righteous weapon against the sexual revolution. And I do believe the mantilla is quite fashionable.
Share on Facebook Tweet Widget