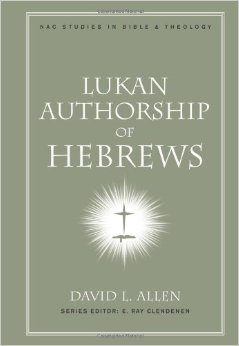 Well, he had me by page 31. Of course, I want it to be true. A while back ago, I wrote an article about my top three questions I have when I get to heaven. What I only hinted at then is my cockamamie housewife theologian theory. I was too embarrassed. But now, thanks to David Allen, I am going loud and proud.

You see, after teaching Hebrews for the last year (or so), I couldn’t shake the suspicion that we were getting something very similar to the “explanation” Jesus gave to the two disciples on the way to Emmaus. What if the mystery disciple on the road to Emmaus was also the writer to the Hebrews? Although it’s merely a theory, some people believe the unnamed disciple to be Luke. Allen gives us much more than a theory on the writer of Hebrews. He gives us a polite scholarly smack down. And even if Luke wasn’t the unnamed disciple, he is the one who gives us the most detailed account of the Emmaus event, showing a knowledge and interest in this amazing exposition Jesus gave about how all the Scriptures pointed to and found their fulfillment in him. Just saying.

But let’s move on to this wonderful, well-written book. I doubt Allen had housewife theologians in mind when he wrote this almost 400 page, scholarly hardback. And I can only review it as an inquiring lay person. When he is breaking down Greek phrases, along with the use of Greek present tense form, well, I kind of have to take his word for it. But, without sacrificing the academic integrity of his work, Allen has written accessibly enough for an interested lay person such as myself. If there are any smarticle (my daughter's word) people who are reading this post, I’m sure you will benefit from Allen’s work much more than I did, but I am very grateful for the education it gave me.

I have a whole new appreciation for Luke—doctor, historian, and linguistic master. “Both Luke and the author of Hebrews are described by most New Testament scholars as the most literary writers of the New Testament” (139). A writer would do well just studying the prologues of Luke, Acts, and Hebrews. Luke is doing so much more than telling a story in his Luke-Acts narratives. Both Luke and the writer of Hebrews reveal a masterful use of the Septuagint. And although the genres are different, Luke seems to have a sermon peppered through his narrative. Luke’s purpose to writing to Theophilus in his two-volume work seems to be the same as the sermon to the Hebrews: to motivate him to persevere in the faith by explaining how “Christianity is the fulfillment of the Old Testament hope of Israel” (176).

One thing about this book that really impressed me is the tone. It’s easier to read a scholarly work when the passion of the author is apparent. It’s inspiring. And yet, Allen doesn’t let this passion take the front seat. He “plays the ball” of the argument, and gives both opposing and supporting scholarly arguments their playing time. In interacting with the opposition, he doesn’t discredit the people, he takes their work seriously and even concedes to other possibilities. Allen is confident enough in his work to reveal the solid evidence, be honest about the educated guesses, as well as reveal which arguments are based more on creativity and possibilities rather than absolute certainty. By doing this, he gets 1,000 more credibility points. It also stimulates the reader to use Allen’s research to think for themselves.

So what are his arguments for the case of Lukan authorship of Hebrews? Totally Awesome. Ahem, I mean, they are historical (yep, some fellers in the early church suspected Luke), linguistic (“lexical, stylistic, and textlinguistic evidence), theological, and, drum roll…pretty darn convincing that Luke was in fact a Jew, and not the Gentile that modern scholars have made him out to be. Allen also looks at the main candidates for Hebrew’s authorship (with the presupposition of the Holy Spirit's inspiration) like Paul, Barnabas, and Apollos, and highlights where they are wanting. It’s a pretty exciting read for theological dorks like me. Some parts were amazingly convincing, like the chiastic framework of all three books, the similarities in their prologues, the use of vocabulary, and the comparison of Acts 7 and Hebrews 11. I also found Allen’s notion on the identity of Theophilus and the recipients of Hebrews as converted high priests to be quite interesting. The historical reconstruction that he gives at the end of the book is also conceivable.

Whether one agrees with Allen’s conclusions or not, they will definitely have to wrestle with his work. He has thrown a respectable pitch into the discussion and wondrous study regarding the writer to the masterpiece of Hebrews. I’m happily persuaded, especially with my underlying, biased theory. And although we will probably not know the identity of this writer with 100% surety in this life, I have just learned a wealth of information from Allen in the process of discovery.