Complementarian Passion vs. My Passion

Aimee Byrd
January 4, 2016
As Todd has already posted, things are not making much sense in the world of complementary leadership. This past weekend, John Piper spoke to a crowd of over 40,000 people, sharing a platform with Word-Faith preacher Christine Caine. 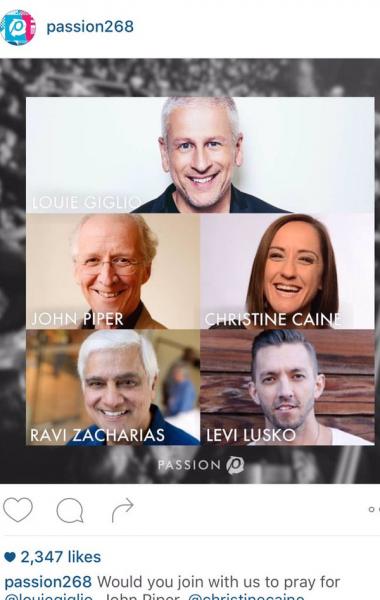 I found out about it from this Tweet by Denny Burk, who had earlier challenged a response Carl and I had to Piper when we said that all men do not have authority over all women. Burk said that in affirming the ordained office was for certain men, Carl and I did not take complementary relationships between men and women far enough. But somehow it is okay to tweet out an advertisement for his followers to live stream the Passion conference, where there is a not only a woman preaching, but one who teaches Word Faith doctrines. And John Piper’s face is right beside Caine’s, as they shared the platform for this major conference.
I agree with Todd that Piper has done much good for the Reformed(ish) community. And I enjoy reading much of what Denny Burk writes. But that is why I am so frustrated. These conversations are important. All this talk about complementary means nothing if you do not care about women. And while I believe that Piper and Burke do care about women, this kind of platform sharing and promoting gives a very different message.
Here’s the thing: I am constantly using the platform that I have to plea to pastors regarding the commodification of the so-called Christian market to women. I am trying to provide resources to help pastors see what the bestsellers are in the Christian women’s genre. I am appealing to women to hone their discernment skills and take responsibility in their discipleship. This is my passion, for women to be good theologians. And there are many women who take this seriously.
Unfortunately, I have talked with far too many motivated women who are dealing with shallow women’s studies, or worse, just plain false teaching in their church’s women’s ministries. One of the biggest laments is that the elders have no knowledge of the harm that these studies are inflicting on the women in their congregation. And the message from silence is that the women don’t really matter. False teachers know how much women matter. Christian publishers know how much women matter as a target consumer base. The Passion conference knows how much women matter in ticket sales.
While the church, above all, knows that women are not tools for deception or a commodity for the market, it can sometimes be the very place where they feel undervalued in their most important role of all---disciples of Christ! This takes initiative from the leadership in the church to turn around. And it would be helpful if some of the most vocal voices for complementarianism would step up and care about what is being marketed to women! We are being used! Is it okay to promote anti-intellectualism among the women in the church, as long as someone like John Piper will be speaking there too? Does that redeem everything, because 40,000 people will hear his message while also listening to Christine Caine’s? And is it okay for the women in his church to do a study on her books? Or doesn’t it matter, because that is the women’s studies and they will never be church leaders anyway?
Meanwhile, women are hardly getting a seat at the table to talk about general theology at all the coed conferences that the complementarians host. I hope that more men and women will speak out about this. Don’t we have something to say here? Isn’t our feminine perspective valuable? Or are our contributions only valuable when we are talking about women’s issues and roles? Don’t we want to take a stand to nurture competent women in the church and seek their contributions as well?
I believe the Bible teaches that the office of ministry is for certain, qualified men. I believe that husbands are the heads of their households. But there is no complementary going on if women are not valued for their contributions, if women are not invested in, and if their gifts are not recognized, honed, and appreciated. Instead, we have women being used as a commodity to buy books that exploit their empathy and emotions, to buy tickets to pack conferences that downplay any theological integrity, and instead of speaking out against it, the very men who insist on biblical precision for male leadership are participating in the rigmarole.
Share on Facebook Tweet Widget