Aimee Byrd
January 2, 2017
2016 has revealed a lot of problems with the Christian celebrity culture. There have been big names that have fallen, treasured orthodox doctrines downplayed and distorted, and many people and churches terribly hurt. Those who warn about this culture, about the ignored or overlooked issues, and even the suppression of abuses within it, are often dismissed because of their tone or accused of overreacting. One popular response to the lament of celebrity culture in evangelical and Reformed communities is an acknowledgement of its prevalence, but with a “What can you do?” shrug. We’re always going to have a celebrity culture.
We are.
Others, accepting this reality, say they want to leverage celebrity culture in order to do good.  That sounds like a plausible response but can too easily become an excuse for uncritically selling-out to celebrity and it usually ends up making its advocates practically indistinguishable from those who are more obviously in it for the purpose of self-promotion.
People will always be drawn by amplified names, bloated endorsements, and charismatic personalities. Some writers, speakers, and preachers are loaded with talents and gifts that can be used in the kingdom. And then they are put in positions of influence and power that can be intoxicating. It’s difficult to have the self-awareness we are called to when so many yes men surround us. And there is of course a market driving it all.
So what do we do about it? Well, here at MoS we do try to highlight the emphasis of the local church and confessional covenant communities. This is a must. But there is good that can and will be done in the parachurch. How can we recognize this, work in it, and deal with the celebrity culture?
There needs to be accountability. And that is the trouble in parachurch organizations. They are not churches and they do not have the accountability that is available with good ecclesiology. While many parachurch organizations resemble ecclesial authority and structure, they are not the church and should not be confused as such. They have boards that can be filled with men who merely build one another’s platforms and protect the brand. 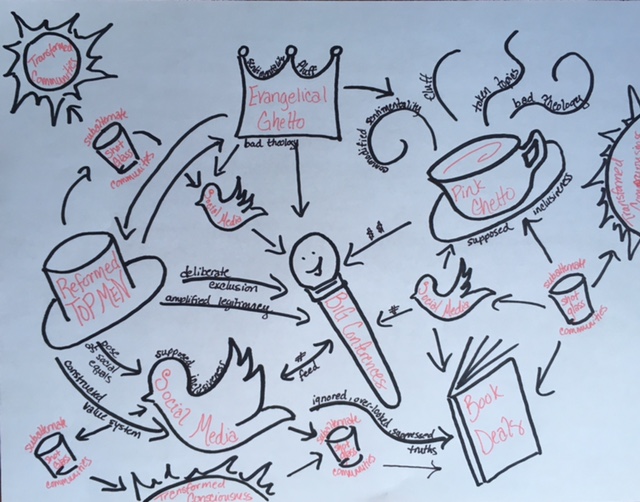 What often happens as parachurch culture inflates into popular establishments is the formation of a constructed value system that is implemented and spread through social media, big conferences, and book deals. This constructed value system augments legitimacy of Top Men while deliberately excluding those who do not conform. Because this constructed value system becomes the gateway to shared platforms, participants can use this language to slip in, or maybe just tolerate, bad theology and bad behavior. The constructed value systems usually gives the appearance of an engaging community, but participants shut out any attempts to interact with thoughts that may threaten their brand.
As one example, the value system coined “biblical womanhood” has been cheapened into a pool of resources full of empty sentimentality, fluff, token topics, and bad theology.
I have recently been reading up on a needed corrective to the establishment, or as referenced in a more secular article, the official public sphere, defined as subaltern counterpublics. That is a loaded term that pinpoints smaller spheres that are affected by and interrelated to these establishments, “where members of subordinated social groups invent and circulate counter discourses to formulate oppositional interpretations of their identities, interests, and needs.” Ioannis Kampourakis explains further:
Nancy Fraser, coining the term from Gayatri Spivak’s “subaltern” and Rita Felski’s “counterpublic”, argues that counterpublics are formed as a response to the exclusions of the dominant publics and that their existence better promotes the ideal of participatory parity.
…Fraser highlights the argument that the official public sphere not only rested upon, but was constituted by significant exclusions.
I like to think of these subaltern counterpublics as shot glass communities, strong doses of truth that cut through the spin of the establishment. In the parachurch realm, there are many shot glass communities. The establishment often looks at them as nuisances, and the shot glasses often look at the establishment with disdain. But there is an interdependency that should be recognized and used for good. Because the parachurch has grown, many more valuable resources are accessible to us. We should be thankful for this. We need to recognize good talent and work. And yet, we cannot take it all at face value. The Top Men need to listen to the critique. They need to hear from the oppressed---and do something about it. They need to correct bad teaching and not believe their own hype. Instead of posing as social equals on social media and then amplifying the same celebrity voices over and over again, they should pepper unrecognized teachers in the mix---not merely ones they are grooming to begin headlining for the brand, but ones to offer a different perspective of their shared truths. What if Top Men were willing to learn themselves? Instead of talking about decreasing, they should actually try it sometimes.
And not all shot glass communities are concerned for truth. Some just like to be a strong dose of condemnation. Some are after ruining reputations. Some are so burned by the establishment that they are now bitter. They are tired of trying to engage and are now only concerned for revenge. There are both Top Men and shot glasses that it would be best to turn away from.
But what about those in between? What could happen if instead of pretending like this isn’t already the dynamics at play, we recognize the need for one another? Kampourakis pleas that if we keep proceeding as if social inequalities do not exist when they do,” it merely “works to the advantage of dominant groups in society and to the disadvantage of subordinates.” He affirms the “positive value of counterpublics” in that they “bring to the fore issues that might have been overlooked, purposely ignored, or suppressed by dominant publics.” In the parachurch realm, I see these shot glass communities as a pathway to transformed consciousness.
That’s what we are after, right? I was recently reading an article reminding the reader that we don’t merely want to aspire to raise awareness.  We are not just trying to provoke a feeling through our interaction; we are after reform.
Hence the positive value of counterpublics: Due to their publicist orientation, they widen the field of discursive contestation, meaning they bring to the fore issues that might have been overlooked, purposely ignored, or suppressed by dominant publics.
Many shot glass communities are formed because they have been ignored. They thought they were a valued part of the larger sphere until they asked a few questions. It’s shocking to see how this is not permitted. But it’s also a reminder that we aren’t to look to parachurch communities for discipleship or genuine community. These establishments are not the means of grace where God promises to give Christ to his people. That can only be found in the covenant community of the local church.
Praise the Lord for his church! That’s where true transformation happens.
We learn over and over again in Scripture that things are not as they seem. A new year is a time of reflection. No, celebrity culture will not go away on this side of the resurrection. But it certainly should not be in the local church. And the church should never be part of the market. This is a good time to put our parachurch organizations in proper perspective, evaluating their role of service to the church and larger communities. We can be thankful for the resources that we have, serving where we can, with an eye on a new creation where we will dwell together serving our King in resurrected bodies. Does our engagement, or lack there of, reflect this?
Share on Facebook Tweet Widget