Books and Block at the Bar

So today’s casual conversation on the Bully Pulpit is about Daniel Block's excellent book, For the Glory of God: Recovering a Biblical Theology of Worship. Carl, Todd, and I point out some sections of the book that stood out to us, and give an overview. As you can see, things started out cordial between the three of us while we discussed worship.

Until I disagreed with Carl. What happens when you disagree with Carl Trueman? He diverts attention from the topic by firing out all his favorite sexist jokes. Very brave of him to do on a day that we recorded by Skype. Listen for yourself and see how Carl reacts to a simple “I 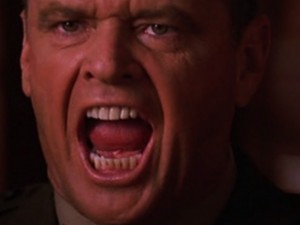 I will say he successfully sidetracks us away from the topic. So for the record, I was disagreeing on the point that people who read prayers are sissies. I don’t think it’s appropriate every time one prays to do so, but I do think it can be enriching on occasion. I would have said that if my jaw wasn’t dropped by my outrage. Well played, Carl, well played. Anyway, it’s difficult to discuss an almost 400 page book on a 15 minute program, so the three of us look forward to posting some reflections on it later this week with the unveiling of our new MoS site. Just don’t expect the new bar to be as swanky as the country club you see us meeting in the above picture. Until then, tune in to hear about this great book, and for Carl to enrage the entire female audience.