Before You Burn the Books

Aimee Byrd
March 17, 2015
I’m just going to go ahead and embarrass myself here---for the sake of the gospel and all. When I was a sophomore in college, I was heavily convicted that I was not living my life according to who I was---a Christian. But I also realized that I really didn’t have a lot of knowledge about the faith that I professed. I began attending a local church, and I wish I could say that they befriended me and discipled me. I did get the smiley welcome, “Where are you from?” question, but was ignored beyond that.
So the next thing I did was visit the Christian bookstore, The Gospel Shoppe. After perusing the shelves and enjoying the smell of new books, I honed in on the table featuring local authors. There was a book there called The Fruit Bearer. I thought I could probably use some fruit in my life at this point. So I killed two birds with one stone; I bought a book that would support a local author and hopefully help me to be one of those fruitful Christians.
The female author was engaging and motivating. But she also wrote about something that I had never been exposed to---speaking in tongues. As it turns out, according to this friendly author, speaking in tongues was both a blessing and a sign that you are bearing the fruit of the Christian life. I wondered, is this real? I did want to bear fruit. But something didn’t seem right, even for this immature Christian.
I thought it wouldn’t hurt to give it a try. I prayed, asking if this was real, would God grant me this gift, this fruit. I waited. I did all the things this author told me to do, mouth agate, just waiting for God’s holy language to pour out of me. Nothing happened. I felt stupid.
But I didn’t think this is what the Christian life boiled down to. I knew too many good Christians who did not speak in tongues. So instead of pursuing “the gift” any further, I went to Scripture. That book I bought was filled with very poor theology, but it led me to dig deeper into what Scripture said about the topic. It also led me to seek out other authors who wrote about the sufficiency of Scripture.
Has that ever happened to you? Maybe not the embarrass yourself by trying to speak in tongues thing, but have you ever read a so-called Christian book that raised some red flags and then led you to study God’s Word more on the issue?
It has happened to me on many occasions. And in that way, I see how God uses even irresponsible, errant books labeled as Christian, to spur his people to learn and value good theology.
In a sense, this is how we have the Christian creeds and confessions that we hold dear today. Along with giving Christians a vocabulary to articulate biblical truths, many of the creeds were written in response to heretical teachings. False teaching will always be with us on this side of the resurrection (2 Pet. 2:1). While I adamantly oppose false teaching and I am continuously disgusted by bestselling books that infect the church, I am thankful that God in his wisdom and goodness even uses bad theology to spur his people further to the truth. 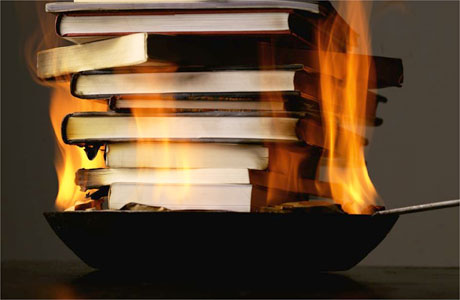 When people ask me about whether a popular book they are hearing about is biblically sound, I am of course going to share any knowledge I may have about that. I also think that it’s important to offer critical reviews that can be helpful for potential readers to discern a book’s content. But when someone is eagerly reading these books that I would rather burn, I try to ask questions that will lead them to Scripture for further investigating. Maybe God will use that as a springboard to spur the reader to the truth. I am thankful he has done that with me more than once.
Share on Facebook Tweet Widget