Aimee Byrd
February 10, 2016
Well, here we are again. My Twitter and Facebook feeds are filled with comments about Lent, and I'm still eating fasnachts for breakfast. Carl wrote a great piece about Ash Wednesday for Ref21 last year that I wish all Protestants would read before posting. I found it to be a great reread this morning with my leftover fasnacht, heated for 9 seconds in the microwave, and cup of mudd. Here's a teaser: 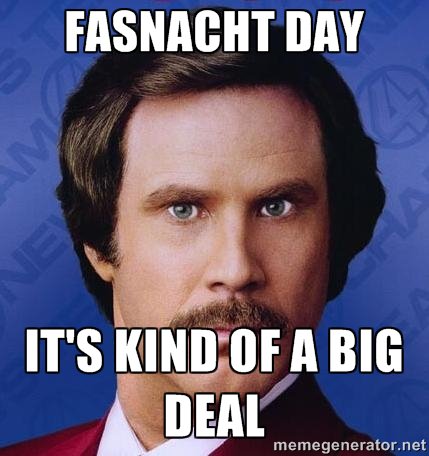 It's that time of year again: the ancient tradition of Lent, kick-started by Ash Wednesday. It is also the time of year when us confessional types brace ourselves for the annual onslaught of a more recent tradition: that of evangelical pundits, with no affiliation to such branches of the church, writing articles extolling Lent's virtues to their own eclectic constituency.
Liturgical calendars developed in the fourth century and beyond, as Christianity came to dominate the empire. Cultural dominance requires two things: control of time and space.  The latter could be achieved through churches and relics. The former was achieved through developing a calendar which gave the rhythm of time a specifically Christian idiom. It remains a key part of Roman, Orthodox and later Anglican church practice.
The rise of Lent in non-Roman, Orthodox or Anglican circles is a fascinating phenomenon. I remember being on the campus of Princeton Theological Seminary a few years ago on Ash Wednesday and being greeted by a young man emerging from Miller Chapel with a black smudged cross on his forehead. That the bastion of nineteenth century Old School Presbyterianism had been reduced to this - an eclectic grab-bag of liturgical practices - struck me as sad. Old School Presbyterianism is a rich enough tradition not to need to plunder the Egyptians or even the Anglicans.
I can understand Anglicans observing Lent. Hey, I can even approve of them doing so when I am in an exceptionally good mood or have just awoken from a deep sleep and am still a little disoriented. It is part of their history. It connects to their formal liturgical history. All denominations and Christian traditions involve elements that are strictly speaking unbiblical but which shape their historic identity. For Anglicans, the liturgical calendar is just such a thing. These reasons are not compelling in a way that would make the calendar normative for all Christians, yet I can still see how they make sense to an Anglican. But just as celebrating July the Fourth makes sense for Americans but not for the English, the Chinese or the Lapps, so Ash Wednesday and Lent really make no sense to those who are Presbyterians, Baptists, or free church evangelicals.
Read Carl's post on reformation21.
Share on Facebook Tweet Widget