Are Evangelicals Too Sentimental? 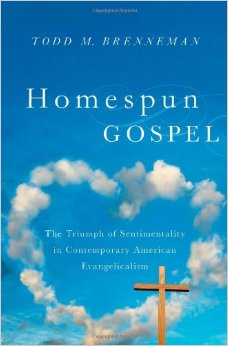 My cohorts and I have been reading through Todd M. Brenneman’s Homespun Gospel for a future podcast. So the recent book review of it over at 9 Marks was interesting to me. Matt McCullough does some interacting with the book. The premise of Homespun is that sentimentality has triumphed as the primary language in contemporary American evangelicalism over doctrine and scholars need to recognize this change.
Brenneman demonstrates his case by examining the work of three mega-church pastors and best-selling authors: Max Lucado, Rick Warren, and Joel Osteen. “The writers tell of a God who is infatuated with human beings and who desires to know the intimate details of an individual’s existence while at the same craving the same type of affection in return.” These authors command a certain type authority through the use of emotion and sentimentality over doctrine, to the point where “A variety of media outlets are often interested in their views on current spiritual crisis and climates…It is not theologians or seminary professors who are making the most impact in evangelicalism. It is these personable ministers who have cultivated publishing and product empires through their emotional appeals” (2-3).
While McCullough concedes that yes, sentimentality is certainly a powerful factor that we need to take seriously, he is not convinced that it has affected evangelicalism to the extent that Brenneman describes in his book. He pushes back saying:
There's no doubting Lucado, Warren, and Osteen have a wide-ranging influence. But there is a large and growing segment of evangelicalism in which these figures and their marketing empires are more often the butt of bad jokes than taken very seriously. Their books aren't read. Their methods aren't followed. Their rhetorical style comes off kitschy and foreign.
I don’t think Brenneman’s claims can be brushed off so easily. Does the term “best-seller” mean anything? I think it means a lot of people are reading their books. And they aren’t professing unbelievers; they are professing evangelicals. These books are read like crazy, and unfortunately, by many people who are in the so-called circles that should know better. How many theology books are best sellers (without the help of ehem, scandalous methods)? Should we compare the sales of say, Dennis Johnson’s commentary on Revelation to Heaven is for Real and the Left Behind series? Speaking as a housewife from the pew who loves to talk with my fellow Christians about theology and discuss what we are reading, I can affirm that this is indeed a real problem even in Reformed circles.
Sure, I think Brenneman needed to qualify some of his critique a little more so that it wouldn't be taken defensively. And McCullough does something in his review that I think would have been a great addition to the book. He breaks down the helpfulness and the dangers of sentimentality. The reviewer asked what we are to do with sentimentality, and I was hoping the author would cover that. It does have some function.
My critique of the book isn’t that the author argues that evangelicals are too sentimental and not concerned enough with doctrine and intellectual arguments. I’m more perplexed about the audience he is aiming for. Unfortunately, in order to appeal to the crowd that is reading these best-sellers, Brenneman needed to write in a more popular level style (and not in a hard back that costs $27.95!). So, the people who already think that evangelicals are over-sentimental and that we need to discuss actual theology more may read it (if we are willing to sacrifice the cost of a bottle of whiskey to buy it), but the sentimental, Lucado-readers are certainly not going to invest in it.
And if Brenneman is writing to those who are trying to communicate intellectually to a crowd who is tuning out, he makes a good case that their means of communicating are falling on many deaf ears (like his own book would to the same crowd). But, the author gives no helpful suggestions on how to resolve this communication barrier. What do we do to build up the theological stamina of evangelicalism?
There’s plenty more to discuss about this book. What do you think, are evangelicals too sentimental?
Share on Facebook Tweet Widget