An Opening Proposition that Changes Everything

Aimee Byrd
March 23, 2017
Here’s a good question: If Hebrews opens telling us that while God has spoken “through the prophets at many times and in many ways,” but that now in “the last days” of this age God has spoken “by the Son,” why are there no quotes from Jesus in the whole sermon-letter? After all, it’s not like Hebrews doesn’t employ a lot of quotes from God’s word in the Old Testament.
This is a question raised in Karen Jobes’ great book, Letters to the Church. Before getting to that question though, she breaks down this all-time best opening hook for a sermon, ever, by looking at all the contrasts, concluding: 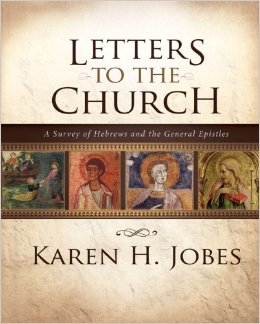 The contrast between the ages (“in the past” versus “these last days”), the audience (“our ancestors” versus “us”), and the mode of revelation (“prophets” versus “the Son”) highlights the one concept that has remained the same through all time: God has spoken to humankind. The author of Hebrews opens his sermon with the bedrock of all biblical thought. God has revealed himself to us. The reality of divine revelation---and idea viewed so skeptically in modern times---is the opening proposition upon which the entire message of Hebrews is built. (63-64)
This is the big question, right? I mean, some like to imagine God is speaking small messages to them everyday, new revelations, personally communicated. But the first challenge in human history is meant to question whether God has revealed himself truly at all. Jobes points out that this opening statement in Hebrews “responds to the serpent’s challenge that led Adam and Eve to the fall,” reasoning, “Therefore, because God’s verbal revelation was at the heart of the fall, God’s verbal revelation is also at the heart of redemption.” If God has spoken to us, then we must respond in obedience in faith.
The writer of the Hebrews attributes all the Old Testament quotations as words from the Triune God, ascribing words that were originally from Moses, David, Nathan, and Jeremiah, to God, Jesus Christ, and the Spirit.
The way the author of Hebrews chooses to use the Old Testament therefore underscores three points for his Christian readers: (1) the word of God that was spoken in the past to “our ancestors” is found uniquely in the Old Testament; (2) the Old Testament “word” was spoken by the Father, Son, and Holy Spirit; and (3) all three members of what would later be called the Trinity speak with the same divine authority. Consequently, the Old Testament is to be understood not only as God’s words to a past people of the old covenant but also as God’s word to Christians after the coming of Jesus. (71-72)
And this leads back to our opening question. Jobes reminds us that Old Testament Prophets have whole books in the Old Testament, like Isaiah, Jeremiah, and Ezekiel. Jesus is the ultimate prophet, and yet there is no book of Jesus in the New Testament, or anywhere in the Bible. Sure, we have him quoted in the gospels some, but even then he spends much of his words quoting from the Old Testament, elaborating on both its continuity and discontinuity in the new age. She notes this to highlight that Jesus is completely distinguished as the final and ultimate prophet. While the gospels do use words from Jesus, Hebrews doesn’t have one quote from Jesus.
This seems rather strange for a book that so confidently states that God has spoken to us by the Son. Wouldn’t this mean that Jesus’ words are God’s words? And if so, shouldn’t the author of Hebrews be quoting Jesus right and left to make his case? The fact that the book of Hebrews doesn’t once quote words from Jesus’ teaching is a big clue about another qualitative difference between the revelation given by many prophets of the past and the revelation given by the Son. Where the words of the prophets were the message from God in the past, the Son himself is God’s final revelation. This is not to say that what Jesus said isn’t important. It is to say that the identity of Jesus as the divine Son of God is what makes him the perfect and final revelation of God. And so no matter how many other people may come along claiming to be prophets with a word from God, if their message doesn’t point to Jesus Christ as God’s clearest revelation, their message is worthless for understanding God. If you want to know God, look at Jesus, who is the “exact representation” of God’s nature (Heb. 1:3). In other words, Jesus doesn’t just speak God’s words (that is what the prophets did), he is God’s word. (75-76)