A Prototype for Contemporary Women's Ministries?

Aimee Byrd
November 16, 2016
I was pleased to see Kate Shellnutt’s article for Christianity Today that calls for churches to look at what’s behind the Jen Hatmaker phenomenon. In it, she discusses the bigger story of transformation of women’s ministries. Finally, this is being addressed more! I certainly follow what Shellnutt meant and demonstrated by this. But I also wonder how much we’ve really transformed.
I’ve been doing a lot of reading on women in American church history. One woman who particularly fascinates me is Anne Hutchinson. There is so much about this woman that I admire. And when I look at her story, I wonder if it could have ended differently if she were taken more seriously and shepherded by the church from the start.
In No Little Women, I include a little about Anne’s story while connecting a thread that I see in a lot of women teachers---a claim to a special, authoritative revelation from God for their own 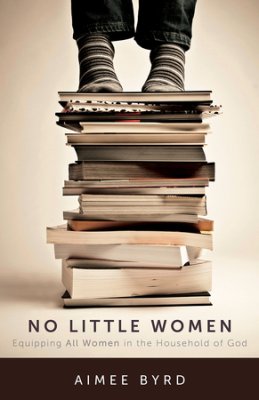 voice to be heard. But there’s something else I notice about Anne’s story. The logistics of her teaching has many parallels to popular women’s ministry programs today. Here’s an excerpt from my book:
There is much about this woman to admire—particularly her desire to take theology seriously and to demonstrate how what we believe to be true about the person and work of Jesus Christ shapes our everyday living. Anne challenged the patriarchy in her day while also striving to live as a godly woman, wife, and mother. She was passionate to continue a discussion after a church sermon had ended, examining Scripture and even longing to engage more with the pastor about the doctrines he taught. She resisted the legalism, bad theology, and politics in England, to the point where, at forty-three years of age, she traveled with her family from England to the New World. Anne Hutchinson’s story is complicated and nuanced. The New World apparently wasn’t ready for a woman like her. In 1638, she was excommunicated from the Puritan church and banished from the Massachusetts Bay Colony, “denounced as a liar, a leper, and the Devil’s helper” (quotes from Divine Rebel, by Selma Williams, 185)
One of Anne’s tactics to be heard was to claim direct revelations from God. It was difficult for a woman’s views and contributions to be taken seriously, and this was a way to get even the men to listen. At first she appealed mainly to women, who would gather at her home to discuss John Cotton’s sermons. After all, she got the impression that Cotton preferred being isolated in his study to being bothered with such personal interactions. And “‘the godly magistrates and the elders of the church . . . winked at . . . her practice’ for several months, even though her audiences grew larger and larger till she was seen as accommodating in her cramped living room almost every woman in Boston, and some from neighboring towns too.” Why would the church officers wink at women who wanted to have more depth in their learning? Many of these women were attracted to Anne because they were “frustrated by the intellectual stagnation that was their lot as outsider” (96). Here we have the women kept at arm’s length from the ministry, left without oversight in a peripheral existence where it was no big deal what they were learning. But Anne’s message, accompanied by her special revelations from God, soon began reaching the men as well. In just two years, she had “the strongest constituency of any leader in the whole colony” (121).
…Do we take women seriously?...This is a question worth examining with more insight than our first reactions may give. The women mentioned above are teachers who add an authority to their words and decisions based on alleged personal revelation from God. They may do this because they know that they wouldn’t be taken seriously otherwise. When they add the weight of God’s personal revelation to their words, all of a sudden more people are listening. Do we really have to do that in order to attract attention to what we have to say? Will people interact with insights and opinions that are merely our own?
And, when we do interact, can we do it on the basis of what is said, not the personality or gender of who is saying it? If we take women seriously, we will want them to be good teachers of the Word. (145-146, 149)
I can’t help but look at Anne’s story as a prototype to many women’s ministries in the wider, evangelical church today.  Many women today are frustrated with the intellectual stagnation of our resources, prescribed roles, and the pushing of our voices to our own little side-wing of the church. The women’s voices are disconnected from the men’s. They are mostly relegated to talk pink-issue matters with other women. Women are still claiming special revelation from God to be heard. And now, after centuries of winking at all this, there’s outcry over the most popular influencers in women’s ministries. The winking is beginning to subside as those who are serious about orthodoxy are realizing that while these may be peripheral ministries, they are indeed affecting the local church. The whole congregation is showing up in Anne’s livingroom.
I do think this is a call for church officers to listen, to begin asking questions about women’s initiatives in their own church, to make sure that over half the church is not working separately, but as part of the covenant community, and to ponder how men and women of the church serve and disciple together under the ministry of Word and sacrament. There should be no little women in God's household. Jesus loves his church. Christ loves his church so much that he wants all of his church, including the women, to “attain to the unity of the faith and of the knowledge of the Son of God” (Eph. 4:13). And this is for the benefit of the entire body of Christ.
I attempt to get this conversation going in No Little Women. It is written for the competent women who are seeking a better way, as well as for those of you who would like to become more competent, as God has called you to be. This book is also for pastors and elders who would like every member of their church to be well equipped in the unity of the faith and the knowledge of the Son of God. I directly address church officers throughout the book. I hope that all men in general will be interested in this significant matter of women and the church. It releases the end of this month!
Share on Facebook Tweet Widget