A Faith That Fights

Aimee Byrd
April 18, 2014
Christians are disciples, and therefore by definition, we are disciplined.Hebrews 12:11, "For the moment all discipline seems painful rather than pleasant, but later it yields the peaceful fruit of righteousness to those who have been trained by it," is couched in an exhortation not to grow weary under the discipline of our loving Father. By using the illustration of a Grecian Olympic fighter, the preacher to the Hebrews teaches us that part of our discipline in the Christian life is conditioning. We need practice. 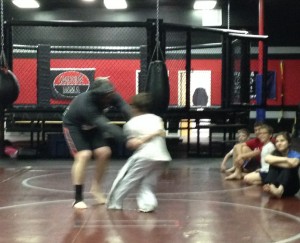 My son had a great Martial Arts lesson the other day. Every now and then, his instructor will spend some time differentiating between the sport and real self-defense. Well, this was a real self-defense day. Before they began getting physical, his teacher, Jesse, asked the students what should be the first thing they look for when they enter a room, such as the one they were in. Kids started yelling out uninformed answers such as, "a punching bag!" or "a fighting cage!" Clearly, they weren't getting where Jesse was going with this, and so he laughs and says, "No! If you are thinking self-defensively, you should always look for available exits when you enter a new place." Then Jesse pointed to the side door in the room and told the kids that he was going to come up behind them one by one, grab them firmly, and attempt to carry them across the large room and out of the side door. He told them to imagine they were hanging out with some friends at a movie. How would they react if someone physically tried to take them? Or, maybe the side door represented a car that a kidnapper was attempting to put them in. He explained that it's hard to predict how you would react in such a frantic situation, and that it is good to practice. Then Jesse put some headgear on, and said that any tactic they wanted to use was fair game; just don't let him get them to the car door. You can read how this all turned out over at Reformation21 here. But here are some pics that will give you an idea about how things went down for H. 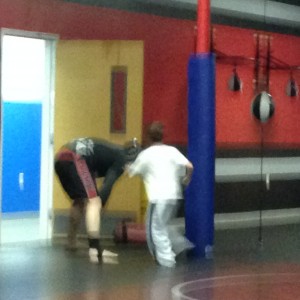 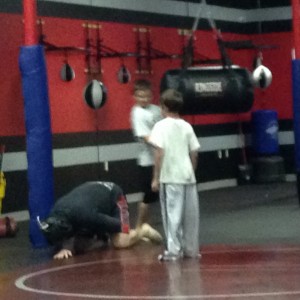 Does God Need Me?: Aseity