When was the last time you read a book on Patristic exegesis that was a genuine page-turner? 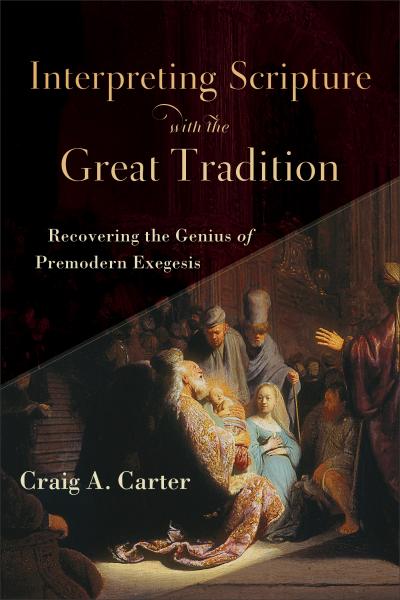 If you have not yet had that experience then you must add Craig Carter’s outstanding new book Interpreting Scripture with the Great Tradition to your reading. The subtitle of Dr. Carter’s book is “Recovering the Genius of Premodern Exegesis.” You will find this book to be both intellectually stimulating and spiritually refreshing. Carter is not shy about challenging some of the presuppositions many of us were trained to accept in exegeting the biblical text. Some of these exegetical assumptions and methods depart from the Patristic tradition and, in Carter’s estimation, threaten to undermine the biblical doctrine of God and the basis for accepting Jesus Christ as Messiah. He demonstrates how aspects of the modern approach to biblical interpretation, even among many conservatives, has more in common with enlightenment skepticism than with the believing presuppositions of the fathers.

Interpreting Scripture with the Great Tradition stands tall among the new books which are, thankfully, recovering the riches of Nicene Christianity for the modern church.

Here is just a taste from the preface:

The purpose of exegesis is to understand what God is saying to us today through the inspired text. The text may have one or several meanings because of the complexity of God the Holy Spirit inspiring the text through a human author. The authority of the Bible is God’s self-authenticating Word speaking through it, and in order to hear God’s Word, it is crucial that we interpret it as a unified book with Jesus Christ at its center. The interdisciplinary practice of biblical studies as found in academic settings today is an agent of secularization in the church and needs to be reformed so that it becomes the servant of Christian theology and spirituality rather than a confusing amalgam of history, philology, archaeology, literary theory, sociological theory, and philosophy operating with unacknowledged metaphysical assumptions and without any material center. The meaning of the text for today is what we seek to hear as we study the text carefully, intensively, and reverently. Biblical exegesis is a spiritual discipline by which we are gradually made into the kind of readers who can receive with gladness the Word of God. Ancient reading practices, which have never died out completely in the church, can help us hear God’s Word in less subjective and more ruled ways than modern hermeneutics makes available to us…

The Enlightenment has exercised more influence on scholars who wish to make an impression on the secular academy than it has on faithful pastors who wish to cultivate a love of the Bible in their congregations. Many books seek to bring church practices into line with academic theory; this one seeks to do the opposite. It is my conviction that academic theory needs to be reformed according to church practice when it comes to biblical interpretation.

This book has grown out of a decade of reading, research, and reflection on the Christian doctrine of God. I have become increasingly disillusioned with modern theology in general and with the twentieth century’s so-called revival of Trinitarian theology in particular. The post-Kantian, Hegelian, Trinitarian theology that has dominated the twentieth century is actually not a revival of the Trinitarian classical theism of the fourth-century pro-Nicene fathers or of creedal orthodoxy as it has been understood throughout church history. It represents instead a massive revision of the Christian doctrine of God. The Great Tradition of Christian orthodoxy begins with the Old and New Testaments, crystalizes in the fourth-century Trinitarian debates, and then continues through Augustine, Thomas Aquinas, the leading Protestant Reformers, post-Reformation scholasticism, and contemporary conservative Roman Catholic, Eastern Orthodox, and Protestant confessional theology. The locus classicus of the Christian doctrine of God is qq. 1-43 of Part I of Thomas Aquinas’s Summa Theologica, which sums up and carefully sets forth in a clear and coherent form the wisdom of Athanasius, the Cappadocian fathers, and Augustine – that is, the Trinitarian classical theism that is expressed in the Nicene Creed. The same doctrine of God is also embodied in the seventeenth-century Westminster Confession of Faith and in the twentieth-century Catechism of the Catholic Church. It has a timeless character that stands in contrast to the shifting winds of doctrinal innovation and cultural fads.