Todd Pruitt
January 4, 2016
Not long ago my MOS compadres received criticism (some of it rather harsh) for their critique of statements made by John Piper about the roles of women in society. There is no need to rehash that particular debate now. However, it is important to remind that we here at MOS share with John Piper and the Council on Biblical Manhood and Womanhood (CBMW) the belief that preachers and office-bearers in the church are to be men. That is clear in Scripture. How exactly or even whether those roles of headship and submission translate into spheres outside the family and church is a worthy debate. Dr. Piper has long advocated that male headship transcends church and family and is to be reflected in civil society as well. I point that out simply to underline the fact that Piper holds to a more sweeping understanding of complementarianism than do many of us who nevertheless fully affirm what the Bible teaches about roles within the family and the church.
That is why I was so disappointed to see that at Passion 2016 John Piper shared the preaching duties once again with a woman preacher. This time it was Christine Caine (in the past it has been Beth Moore). Incidentally Caine preaches many of the troubling errors of Word/Faith and Prosperity theology. She also claims Joyce Meyer as a mentor and promotes her ministry.
As I have written at other times, this sort of partnership by a man of great influence like John Piper with someone whose doctrine is quite troubling places local pastors in a difficult position as we seek to guard our churches from false and divisive doctrines. This was a major concern that many of us had with Piper’s embrace and promotion of Mark Driscoll. Something that he recently said he did not regret.
As I have already stated: I agree with what Piper and CBMW and the Danvers Statement all affirm about the roles of men and women within the church. How is it that John Piper, who has spoken and written so copiously on male headship, would appear with a woman preacher (and do so numerous times)? Is this not terribly inconsistent?
I know that asking inconvenient questions of any of the stars in the reformed(ish) firmament renders one irrelevant and invisible. I understand that one just does not publically disagree with the heroes. Yes, we in the reformed(ish) world do have our Popes.
I write this with great caution because I owe a lot to John Piper. For me, like so many Baptists who saw the Doctrines of Grace throughout the Scriptures, John Piper was among the first men who helped us understand the beauty of God’s sovereignty in the salvation of his people. He has written books that have been and continue to be helpful to me. Books I still gladly recommend.
But these sorts of inconsistencies ought to be named. These sorts of partnerships which lead to confusion in churches ought to be called out. How many people will now follow the teaching of Christine Caine because John Piper has given her the proverbial green light? How many pastors will now have to risk the disapproval of Piper fans in our churches by pointing out that his sharing preaching duties with Christine Caine was unwise at best? Oh how I wish the stars would appreciate how their actions and associations impact the ministries of ordinary pastors.
I wonder how many council members of The Gospel Coalition or of CBMW would share a preaching platform with a woman preacher or someone associated with Word/Faith error? I don’t expect anyone in Dr. Piper’s sphere to press him on the issue. There is simply too much to lose.
I wonder if any of the men who took Byrd and Trueman to task for holding what they believed to be an under-developed doctrine of gender roles will now seek answers from John Piper. I certainly will not hold my breath. One simply does not do that and keep his or her seat at the table. The phone will stop ringing. The email loop will have one fewer participant. The invitations will disappear. The blog will become irrelevant.
I know that sounds cynical. But I have been an observer of these things for too long to believe otherwise. The Reformed(ish) Industrial Complex is too insular and self-protective. It is too sensitive to anything that sounds like critique. It is too committed to its own promotion. Early on I suppose I was too sanguine about the rise of the YRR movement. I assumed that holding to reformed doctrine would guard us from unwise practice and the celebrity culture that was so much a feature of broader evangelicalism. I was wrong.
But I will throw out the questions anyway: Is it consistent with the complementarianism of CBMW, TGC, and Danvers to share preaching duties with a woman preacher? Was it wise for John Piper to offer his de facto endorsement of Christine Caine? Will anyone whose voice actually has a chance to make a difference speak up?
From Christine Caine:
“Oh yes, I did lay my own hands on @joycemeyer bible & teaching notes & prayed for an impartation of that teaching anointing & revelation. It was a privilege & honor to shadow her this past week. Far more is “caught” than is ever “taught” in life!” 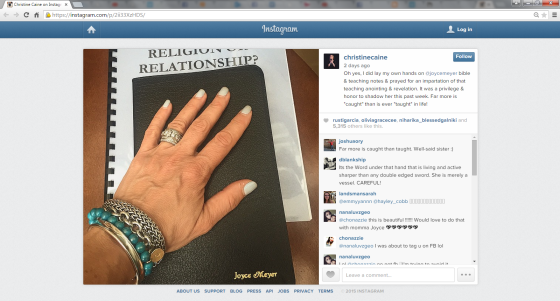