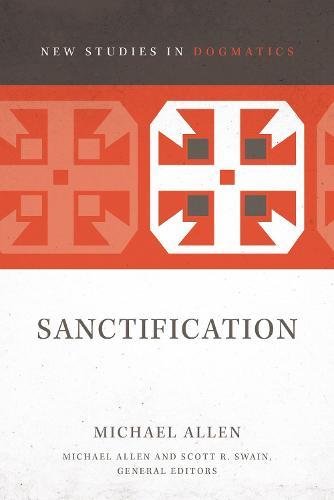 My pick for book of the year…
Sanctification by Michael Allen
Michael Allen has contributed the third volume in the New Studies in Dogmatics series. It is a feast and my pick for book of the year. I won’t try to describe the book other than to say that Dr. Allen grounds holiness in the doctrine of God, Christology, and the covenant relationship between God and his people. Jesus saves his people not only from the condemnation of sin but from its power as well. This is a must read. You can listen to the Mortification of Spin interview with Dr. Allen HERE.

Between Wittenberg and Geneva: Lutheran and Reformed Theology in Conversation by Robert Kolb and Carl Trueman
What an appropriate subject for the 500th anniversary of the Protestant Reformation. These two scholars help the reader understand the distinctives of the Lutheran and Reformed traditions. This book was a pure pleasure to read. Drs. Kolb and Trueman are at the top of their game. It is an irenic dialogue between two men who understand and are committed to their respective traditions.

Martin Luther: Renegade and Prophet by Lyndal Roper
It was certainly appropriate to read at least one biography of Luther this year. When some of the world’s notable Luther scholars recommend a biography it’s a good idea to read it. Though described as a feminist historian by some, Roper is a first-rate scholar and her biography on Luther was a delight to read. This is both one of the most enjoyable biographies on Luther I have read and one of the best examinations of 16th century Europe.

Not Tragically Colored by Ismael Hernandez
Though published in 2016 I could not help but include it in this list. Hernandez gives us one of the most insightful, compassionate, and courageous books I have read in some time. A native of Puerto Rico and former Communist, Hernandez’ pilgrimage to the United States and rejection of Communism is deeply moving. But that is only the introductory material. The book is subtitled “Freedom, Personhood, and the Renewal of Black America.” I would suggest that if anyone desires to contribute something helpful to the current discussion of race and racial reconciliation they would be wise to read Mr. Hernandez’ outstanding book.

All That is in God by James Dolezal
The doctrine of God has received renewed attention in the last couple of years. Specifically, there seems to be renewed interest in those classic categories that many contemporary theologians have rejected, redefined, or not understood. This is an important book. You can listen to the Mortification of Spin interview with Dr. Dolezal HERE.

On Human Nature by Roger Scruton
For those not familiar with Scruton’s work, his latest book is a good introduction to the British philosopher. Here, Scruton argues for the uniqueness of humanity. He argues against philosophical and Darwinian materialists like Richard Dawkins and Daniel Dennett.

Retrieving Eternal Generation edited by Fred Sanders & Scott Swain
The debate over the Trinity which began in the summer of 2016 involved a discussion about the propriety of the translation of John 3:16 and the doctrine of eternal generation. This book removes all reasonable doubt that eternal generation is thoroughly biblical and ought therefore to be retained by the church. These series of essays establish the hermeneutical, historical, and dogmatic foundations of this vital doctrine.

How To Think by Alan Jacobs
Jacobs is a wonderful writer who I enjoy reading even when I don’t necessarily agree with him. I thoroughly enjoyed reading his latest which is subtitled “A survival guide for a world at odds.” If you get a chance listen to the interview with Dr. Jacobs on Mortification of Spin HERE.

Descriptions and Prescriptions by Michael Emlet
Every pastor and elder ought to read this wonderfully helpful book by Dr. Emlet. It is concise and yet highly informative. Emlet gives the reader a much needed tour through the challenges complexities of psychiatric diagnosis. Throughout the author tethers his counsel and conclusions to God’s Word. Watch for the upcoming Mortification of Spin interview with Dr. Emlet.

Exploring the Bible: A Bible Reading Plan for Kids by David Murray
The last several years have seen the production of many excellent books for children. David Murray has added a worthy volume to the list. Described as “52 expeditions through God’s Word” Exploring the Bible provides children ages 8-12 with daily Bible readings and brief meditations to guide them through the whole Bible. Parents, this is one you want.

Worth Mentioning…
These are books that are high on my “must read” list. Unfortunately I have not had time to get to them. But judging by the reviews and what I have read by these men previously I am looking forward to digging in…

Walking Through Twilight by Douglas Groothuis
As I write this list I am in the middle of reading Dr. Goothuis’ moving account of his beloved wife’s descent into dementia. If the second half of the book is like the first then it belongs on a best of 2017 list.

Christianity at the Crossroads by Michael Kruger

The Last Adam by Brandon Crowe