Movements and the Means of Grace

Todd Pruitt
February 17, 2014
Evangelicals love movements. I suppose it's because it makes us feel a part of something big or at least bigger than our church. Don't misunderstand. I like a good conference as much as anyone. I have benefited from good conferences. I appreciate Together for the Gospel, not least of all because their ambition is fairly limited to a conference every other year. They make no effort to be a quasi-denomination. I hope it stays that way. But the evangelical church, particularly in the United States, seems to birth more movements than we can keep up with. Some movements come on like gang busters and then just a quickly fade away (Remember Promise Keepers?).

What is this appetite for movements? Is it our craving for the ever new? Probably. Now that the Young Restless Reformed movement is no longer new there is evidence of former enthusiasts departing for greener pastures. Let's face it. Now that the Young Restless and Reformed are Middle-aged and exhausted it does not seem quite so cool as it once did.

But I think the more likely culprit in our craving for movements is our poor ecclesiology, particularly related to God's ordinary means of grace. I had never heard the phrase "God's ordinary means of grace" until I was introduced to the reformed faith. As a result I had no doctrinal or experiential category for the true significance of those ordinary elements that make up the corporate life of a biblically informed church. If you are unfamiliar with the term "ordinary means of grace" it refers to those elements of our gathered worship to which the Lord has attached his blessing: the preaching and reading of God's Word, the sacraments (Lord's Supper and Baptism), prayer, praise, and fellowship.

These ordinary means of grace are the things that the Lord has given his church. They are not the inventions of man. We call them means of grace because the Lord has appointed them as means by which he blesses and builds his church. We call them ordinary because there is nothing about them that is spectacular. They are not rare like miracles. They are ordinary. They are to be practiced regularly in our Lord's Day gatherings precisely because we regularly need what God offers us through them. But these are gifts not given to movements. God has given these means of grace to his church.

Movements tend to focus on a preferred market niche like women, men, black, white, young, fans of loud music, students, the balding, etc. Interestingly I don't see many movements targeting for its core the elderly or poor. But that's another post. I'm not saying that a meeting or conference tailored specifically for men or women is wrong. But it must not supplant the church, for a movement is not the church. Movements are not the inheritors of God's promises nor are they the stewards of God's oracles and his ordinary means of grace.

Christians need to be very cautious about movements. This is especially true when a movement seeks to minimize doctrinal distinctives in favor of a poorly defined quasi-mysticism. This came to my mind (once again) when I read an article about the IF Gathering. 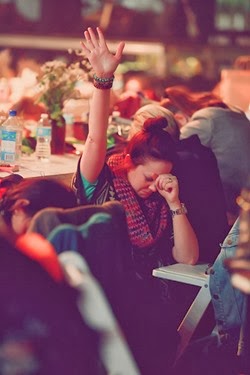 "I hear enough people telling me how to be a good Christian mom. I don't need that," said Andrea Burkly, a Catholic who traveled from Wheaton, Illinois, to attend the Austin event. "This is a call for revival and unity, and it lined up with what's in my heart right now."

In between sessions, the mostly-young crowd discussed with each other their own sense of calling as well as hindrances such as fear and comparison. They worshipped together with hands lifted high and kneeled to pray for the Holy Spirit's guidance.
The origins of IF, as well as Allen's recently released book Restless, date back to 2007, when she woke up in the middle of the night with the vision to "gather, equip, and unleash" this generation of Christian women. Allen, 37, holds a master's in Biblical Studies from Dallas Theological Seminary and had been a stay-at-home mom leading a women's group at her church Austin Stone, an Acts 29 congregation.

Since then, she published a series of Bible studies through Thomas Nelson and built up the connections necessary to organize a movement around that initial vision, one she sees echoed in the words of her friends—new and old—across the Christian blogosophere.
"We've been slow to step into our giftedness or strengths. For a long time, that wasn't an option," said Allen. Now, though, "there is something happening in our generation, and I believe it's a manifesto in a way, a call for us to link arms and to spend our lives beautifully and well for the glory of God."

I was not surprised to see the connection between the movement and a recently published book. Now a major publisher will be stepping in to create a series of studies feeding into the movement. Perhaps I am cynical but there is often much money to be made in these ventures. You will notice also the vague language of revivalism - "something happening in our generation," "unleash this generation," "step into our giftedness." I honestly don't know what any of that means.

I know I will be perceived by some as criticizing a move of God. But I assume that critics of Finney faced the same rebukes. I am troubled by movements which promise fresh experiences with God or a new movement of God and then market products to support this new outpouring. Those of us raised in conservative but non-confessional evangelicalism were steeped in that language. Everything had to be new and fresh. A steady sanctification wrought by God's ordinary means of grace in a local church was simply not a part of our diet.

I was raised attending the obligatory annual Spring and Fall revivals. There were camps and retreats and choir tours and mission trips. The underlying assumption was that in those events we would feel especially close to God; we would have a particularly "meaningful," "intimate," "authentic," etc. experience with God that was not generally available on the ordinary Lord's Day. As a result (and I was far from alone) I never considered what happened in our regular Sunday gatherings as anything particularly special.

I am happy to be part of a movement. It's called the Presbyterian Church in America. We have a rather detailed confession of faith called The Westminster Confession of Faith. We have a well thought through structure for polity, governance, dispute settling, instructions for public worship, etc. It's called the Book of Church Order. We have a growing ministry to university students called Reformed University Fellowship (RUF). We have a church planting agency. We have a missions sending agency for North America (MNA) and the World (MTW). We produce curriculum for Christian education and discipleship (Great Commission Publications). We have a university and seminary. Not too shabby.

Believe it or not, that was not a commercial for the PCA. Rather it was a means by which I might force a question: Why another movement? Why a movement without a proper confession of faith? Why a movement that would take time away from that to which I already belong? And most importantly, why a movement that is detached from oversight of a church? Why a movement that minimizes the ordinary means of grace which Jesus has entrusted to his church?
Share on Facebook Tweet Widget