No, we are not ready to move away from the Trinity controversy yet. The ones who are guilty of propating the error of ESS/EFS have not yet publically repented. That, by the way, is what is required when one spreads doctrinal error. 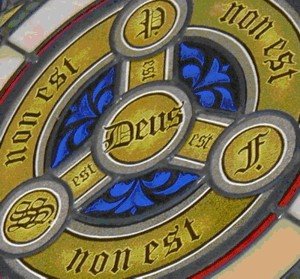 There are already attempts going on to rewrite history ("Our organization never promoted ESS!"). Those who came out swinging when MOS first began posting challenges to ESS, having noticed the clear consensus of scholars, are remaining largely silent on the issue of late.* That is wise. It's never a good idea to continue to press for something which has proven to be inconsistent with Scripture. The problem is that while seminaries quietly try to get some of their professors up to speed on Christian orthodoxy and publishers revise books on the downlow the errors continue to fester in the soil of many churches and parachurch ministries.

To advance doctrinal error is sin. It matters not if the guilty party did not know he was teaching error. To do so out of malice or ignorance is sin. It is impious, for instance, to foist common analogies upon the majestic and mysterious Godhead. It is true that, being in the image of God, we are like him in some ways. Nevertheless God is not like us. And the Trinity is most certainly not like a human family with the Father as husband, the Son as wife, and the Spirit as child.

An official from a rather large denomination and a fine brother recently reached out to me to confirm that this controversy prompted his committee to begin scrubbing all of the ESS and references to the men who have promoted it from their curriculum and recommended resources. That was good news indeed. But what of the many churches, denominations, and ministries which do not have men as discerning as the brother to which I spoke? This is why repentance and refutation are so important. The men and ministries and seminaries which have either actively or passively promoted ESS need to say what all Christians must say throughout their lives: "I'm sorry. I was wrong."

Until that happens I do not see how this controversy can come to an end. God's glory and the peace and purity of the church are too precious to turn a blind eye to error which strikes at the heart of the nature of God.

* I did notice that Wayne Grudem will be presenting a paper at the 2016 meeting of the Evangelical Theological Society which is entitled "Why A Denial of the Son's Eternal Submission Threatens Both the Trinity and the Bible" (p. 51). That is a bold statement. Given the recent controversy I suspect there will be a capacity crowd.