Boys Should Be Boys 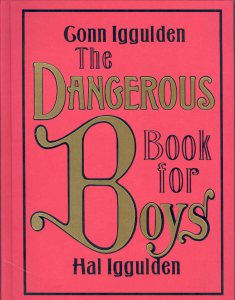 When I first saw The Dangerous Book for Boys at Barnes and Noble I assumed it would be another experiment in turning little boys into little girls. After all we live in a day when feminists like Gloria Steinem have advised that “we badly need to raise boys more like we raise girls.” It seems that many Americans have followed that advice. There is a generation of young men who are now more adept at sharing their feelings than they are at thinking logically. If you don’t believe me then watch a little MTV and see the silly excuses that are held forth as “men”. They are as likely to shed a tear as their female counterparts.

If I sound sexist then please forgive. My rhetoric may sound harsh only because the male culture in America has been so feminized. In her essential book The War Against Boys, Christina Hoff Sommers documents these disturbing trends. She observes that in the modern school classroom, teachers view the budding masculinity of boys as a disorder to be overcome rather than a gift to be cultivated. Of course most boys are likely to go through school and never have a male teacher except for the occasional health class or P.E. Games such as tag and dodge ball have been banned for encouraging competition and aggression. Adventure stories have been scrubbed from the reading lists. History classes spend little or no time studying the great battles of history and the men who led their troops in victory. No wonder so many boys hate going to school.

Thank God for Mr. Rogers who taught my English Literature class during my senior year in high school. The year began with a two week study of Beowulf, the oldest known story in the English language. It is full of courage, valor, and, yes, violence. It even has a terrible beast named Grendel who, in the end, gets what was coming to him. For two weeks Mr. Rogers helped us sink our teeth, as it were, into the meat of that ancient story. I was hooked. I knew then that reading great stories didn’t have to be “soft.” There were indeed stories full of risk and danger and honor and blood.

That brings me back to The Dangerous Book for Boys by brothers Conn and Hal Iggulden. After a few weeks of seeing it there on the shelf at the book store I finally picked it up. I was delighted by the feel of the thing. It is oversized and has the look of an older addition of Treasure Island. It even has the old-fashioned “swirly” liner paper on the inside cover. It is full of illustrations, maps, diagrams, and photographs. It includes information that every boy wonders about from time-to-time. On page two there are instructions on crafting “the greatest paper airplane in the world.” On page 35 boys are taught how to make a bow and arrow. There are two sections on famous battles. The book has instructions on everything from how to make a tree house to fishing to making a go-cart and first aid.

This is no one dimensional book however. In addition to the building and survival skills The Dangerous Book for Boys also operates as a guide for growing well-rounded young gentlemen. There are sections on astronomy, grammar, the seven wonders of the ancient world, and even how to appreciate Shakespeare. It also provides as list of “books every boy should read.”

The authors include a quote from Sir Frederick Treves from 1903 that captures well the spirit of the book:
“Don’t worry about genius and don’t worry about not being clever. Trust rather to hard work, perseverance, and determination. The best motto for a long march is ‘Don’t grumble. Plug on.’ You hold your future in your own hands. Never waver in this belief. Don’t swagger. The boy who swaggers – like the man who swaggers – has little else that he can do. He is a cheap-Jack crying his own paltry wares. It is the empty tin that rattles most. Be honest. Be loyal. Be kind. Remember that the hardest thing to acquire is the faculty of being unselfish. As a quality it is one of the finest attributes of manliness.
“Love the sea, the ringing beach and the open downs.
“Keep clean, body and mind.”

Get The Dangerous Book for Boys. Better yet, read it to your sons. Let them read it. Let them play with it. It’s tough. It can take it.