A New Reformed Church in a Gospel-Starved Country

He was a civil engineer in Italy. She taught Latin in a Hungarian high school. Neither knew that the Lord was about to overturn their lives, bring them together, and send them as missionaries to the southernmost city in the heel of the Italian boot: Lecce.

Vincenzo Coluccia describes the changes that took place in his life as a series of earthquakes. The first occurred when, at seven years of age, he served as a conscientious altar boy at the local Roman Catholic church. His family was devout, especially his grandmother. But, as most Italian Roman Catholics, they didn’t have a Bible and didn’t feel the need to read it, since they could get answers from the priest.

The “earthquake” started when a neighbor, who had joined a Pentecostal church, went to visit them, Bible in hand, and told them they could be saved simply by accepting this salvation through Christ. “She threw our family into panic,” Vincenzo said. “My mother was crying. Roman Catholics don’t believe a person can know whether they are saved or not. They find out when they die.”

The neighbor left two Bibles, one for the parents and one for the children. Vincenzo and his mother started to read it, while his father and sister considered them “damned.” “Our family was divided into two camps.”

The Bible began to raise questions in Vincenzo’s mind. For example, why did the Roman Catholic Church erase the second commandment and divide the tenth into two? Was it to minimize God’s condemnation of images? When asked, the local priest just told him to stop reading the Bible: “If you read it, you’ll stop believing the church.”

Vincenzo’s scientifically-prone mind was not satisfied with general answers. But the more he searched the Scriptures, the more he realized that God was calling him to a greater commitment. His prayer was similar to Augustine’s “change me, but not yet.” “Let me just live my life,” Vincenzo asked the Lord.

But God was not done with him. At age 18, Vincenzo moved to Turin, in northern Italy, to study. Far from home and friends, he found comfort and refuge in the Scriptures. God worked slowly but surely so that, by the time he was 25, his heart had surrendered to Christ. Over the next couple of years, God did the same for Vincenzo’s whole family, including his father, sister, and grandmother. Yielding to what he saw as God’s hand on his life, Vincenzo was baptized, and began to attend a church of the Assemblies of God.

That’s when the second “earthquake” happened. The more Vincenzo read the Bible, particularly Paul’s Epistle to the Romans, the more he became convinced that the Arminian interpretations of the Pentecostal church were incorrect. Other things added to his inner turmoil: a series of medical tests for what appeared to be a cancer of the liver (later ruled out) and the sudden end of a marital engagement.

He found some peace when he realized that his interpretation of the Bible was backed by authoritative sources: particularly John Calvin, Martyn Lloyd-Jones, and R.C. Sproul (whom he now calls his “adoptive grandfather”).

In the meantime, some people started to recognize his leadership abilities. Gideon International appointed him Director for North Italy, while his pastor asked him to join him in the ministry. While he turned down his pastor’s offer for theological reasons, he realized this outer call was matched by an inner call. “I must study,” he thought.

Around that time, he attended a conference where he met Rev. Andrea Ferrari, who was pastoring a URCNA church plant near Milan. Through Ferrari and Rev. Michael Brown, then pastor of a URCNA church in Santee, California, Vincenzo applied to Westminster Seminary California and was accepted.

The program of studies at Westminster is notoriously rigorous, particularly for someone who is still trying to master the English language. Vincenzo remembers it took him a while to figure out who was Plato (known in Italy as Platone). In spite of these challenges, he was able to graduate in three years.

“I cried a lot,” he said. “I cried because it was so hard, but also for the joy of discovering God as I had never known him before. I wanted so much for my brothers and sisters in Italy to be with me and receive the same training.”

In 2019, he became the first Italian to graduate from Westminster Seminary. In July 2020, after Mission to the World had called him to plant the first presbyterian church ever in southern Italy, the PCA South Coast Presbytery ordained and installed him as an evangelist in Lecce, near his hometown.

Judit, on the other hand, grew up as a covenant child in a Reformed family in Hungary. Her father was an elder in the local church. As a child, she liked to read stories about missionaries. This passion continued. As she learned other languages, she translated into Hungarian a few letters by missionaries. Sometimes she prayed, “I will serve you, Lord, wherever you send me!” But she never thought God would take those prayers so seriously. She thought she could serve God as a schoolteacher and as a youth group leader and member of the choir in her church.

During her university studies, she spent a semester in Milan, Italy, where she attended the URCNA church plant, Chiesa Riformata Filadelfia, at that time pastored by Andrea Ferrari. Andrea and his wife, Cristina, became her “Italian Parents.” She also met other Reformed Christians, including Vincenzo.

“Once I realized the need for more Reformed churches in Italy, I began to pray for God’s people there, but I still didn’t think He would call me to live there for the rest of my life,” she said.

After she returned to Hungary, she finished her studies, and started to teach Latin and Hungarian Literature in a Franciscan high school. She was a passionate teacher. She later realized this was a good preparation for her mission in the mostly Roman Catholic Italy.

In the meantime, she kept in touch with Andrea and Cristina, who visited her a few times in Budapest. They also encouraged Vincenzo to write to her, as they saw her as a future pastor’s wife. As it turned out, Vincenzo had been praying for Judit ever since they met.

By then, Vincenzo was already moving forward with his plans to plant a church in Lecce. “I knew that, if I married him, I would have to leave my family, job, and country,” Judit said. “At first, it seemed difficult, even if it was an answer to my prayers. But the Lord had been preparing my heart to say yes to the call of becoming Vincenzo’s wife and to serve God’s people in Italy.”

Vincenzo visited Judit again a few times, but they mostly corresponded by mail. She traveled to California to attend his graduation ceremony and ordination. Then they traveled back to Europe together, where they got married, first in Judit’s church in Hungary, and then in Italy, where, besides their immediate and extended families and friends, many pastors of Evangelical and Reformed churches attended the ceremony.

After this double wedding, the couple returned to the States, where they continued to prepare for their missionary work and where their first child, Abigail, was born. At the same time, Judit attended a few classes at Westminster Seminary. 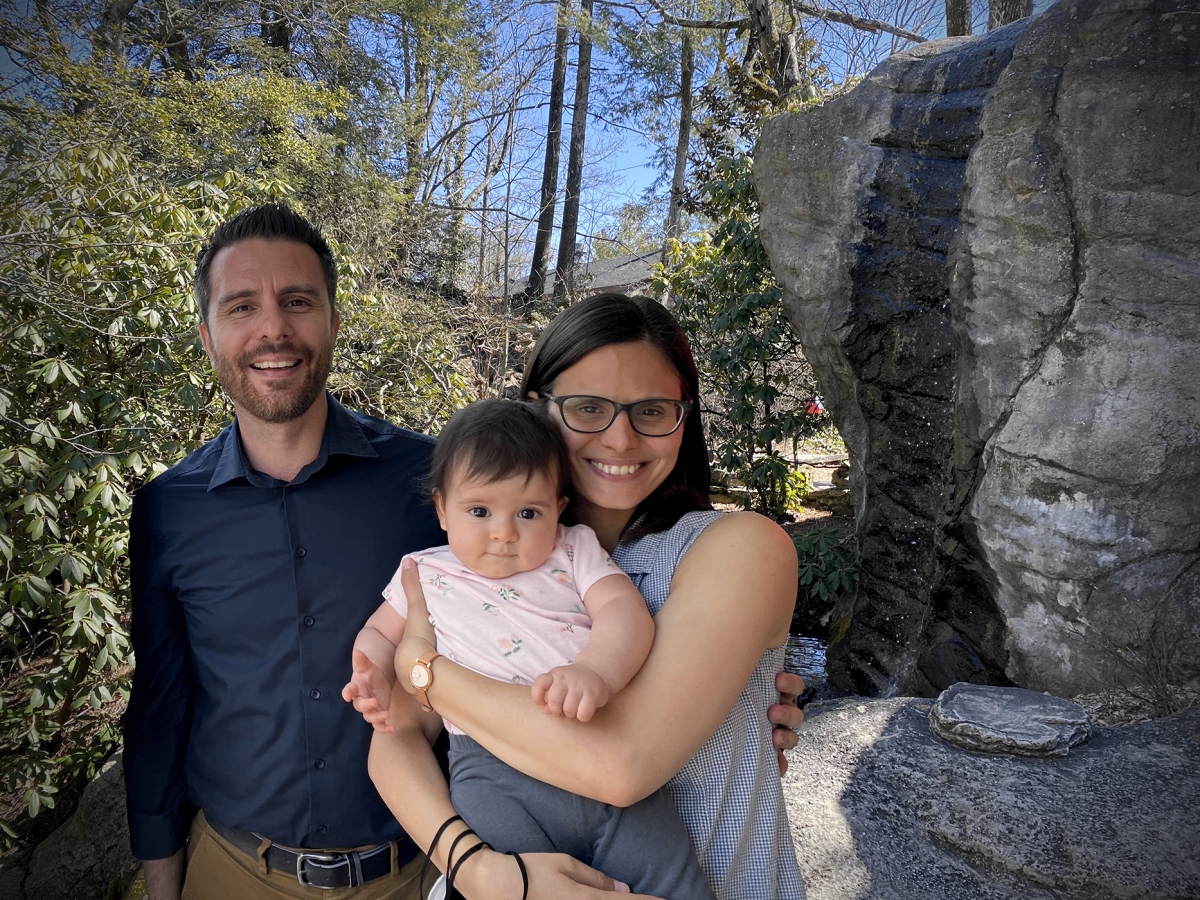 Vincenzo and Judit with their daughter, Abigail.

On May 16, 2021, the Session of New Life PCA in Escondido, California, commissioned Vincenzo as a missionary to Italy. The chosen name for the Lecce church plant is “Pietra Vivente” (Living Stone), reminding Vincenzo of God’s work in his life. “The Lord called me while I was designing buildings for the city,” Vincenzo is fond of saying, “and asked me to contribute to His temple of living stones.”

Judit and Vincenzo flew back to Italy on May 19. They are aware of the challenges ahead. The Protestant Reformation is still a foreign concept for the majority of Italians. Back in the sixteenth century, the Roman Catholic Church was quick to ban its books and preachers from the peninsula, issuing a firm condemnation at the Council of Trent. Since then, most Italians have learned to look at Protestants with distrust. “Many think I am no longer a believer,” Vincenzo said.

But he is not discouraged. For one thing, he knows the culture and many people in the Lecce area know him. “I left home to become an engineer, and I am returning as a pastor. People are surprised, but also curious. I already spent hours talking to many of my relatives and friends at the time of our wedding.”

Besides, Reformed pastors have some natural advantages. First, Reformed liturgy is solemn and respectful, which is closer to the Roman Catholic mentality than the informal evangelical style of worship. “Form is very important to Italians,” Vincenzo said.

Second, while some revivalist movements such as the Pentecostals have grown rapidly in Italy over the last decades, Vincenzo attributes much of this to their incitement of people’s emotions at a time when the level of literacy in Italy was low. “Now, Italians are much more educated and are asking deeper questions,” he said, “which the Reformed church is equipped to answer.”

Judit is confident that she will fit in well because she had loved Italy before she even knew Vincenzo. “There are cultural differences between Italy and Hungary, but they are not huge. Both of them place much value on the family. My biggest challenge will be finding a balance between my roles of mother, wife, and missionary. There will be a lot to do and I need to learn how to best manage my time.”

How can our readers help this fledging mission in a country where only one percent of the population identifies as Protestant? “They can pray,” Vincenzo said, “and they can send financial support” – ideally, enough to cover the expenses of the church and to sponsor translations and, in the long run, even a Reformed seminary. “According to a statistic, ninety-eight percent of pastors in Italy are self-taught and can’t read English, nor have the funds to study abroad.”

Although Vincenzo aims at becoming self-supporting, teaching Italians to give to a church will take time. “A paradigm shift must take place in their minds and hearts,” he said, “Since Roman Catholic priests are paid by the Vatican, many Italians only put a few cents in the offering plate.”

“If possible, Americans can come to visit, so we can continue to feel part of the larger church,” he continued. Ultimately, Vincenzo hopes that God will inspire someone to move to Italy to help. “We will be on our own. What happens if I get sick?”

Anyone called to join the Italian mission will have to learn the language and culture. “We can’t export the American model,” Vincenzo said. “To adapt, a missionary will need humility and wisdom. He will need to mingle with people, meet them at the coffee shop, be present in the community, walk or bike down the streets.” It will take work, but the rewards will be great.

Vincenzo and Judit’s arrival in Lecce was not met by representatives of the local news. Most likely, Chiesa Pietra Vivente will also open its doors quietly. But we can be sure the angels of heaven are already rejoicing (Luke 15:10).

Simonetta Carr is a mother of eight and a homeschool educator for twenty years. She has also worked as a freelance journalist and a translator of Christian works into Italian. Simonetta is the author of numerous books, including Weight of a Flame and the Christian Biographies for Young Readers series.

"A Resolution for the Church" by Zachary Groff

"Mission to the World" by Philip Ryken