Note: The following is adapted from a letter sent in response to a gracious correspondent who was concerned about Dr. Trueman’s representation of the words of Rev. Greg Johnson. It is published here rather than First Things due to the intramural nature of the matter involved.

Thank you for your email. I particularly appreciate the gracious and thoughtful tone in which you express your views and request. That means a lot to me.

As to the question of whether I misrepresented Mr. Johnson in my First Things article, a few comments are, I think, in order. 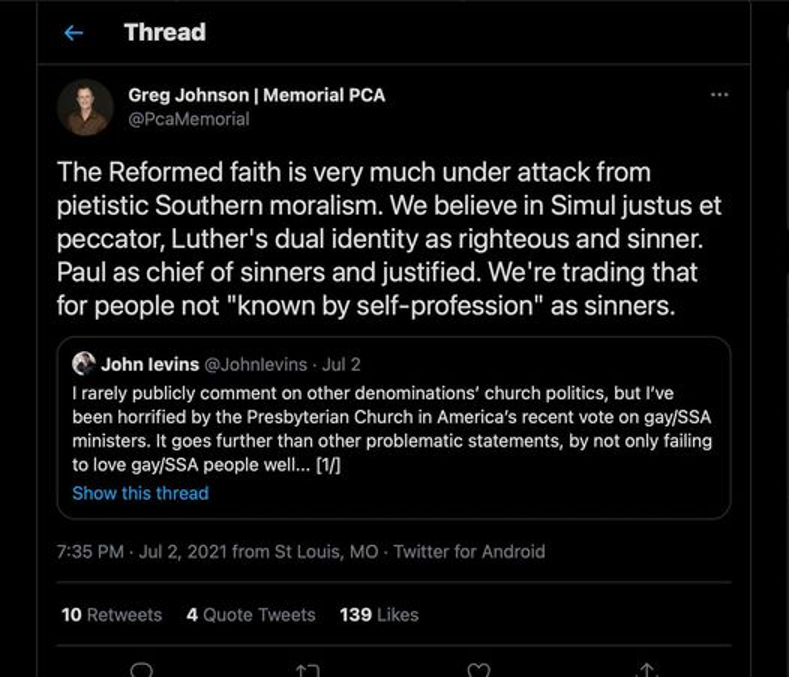 The context makes it clear that he is responding very specifically to the recent GA decisions—both the linked tweet and the phrase “known by self-profession” make that obvious. In my article, I characterize this sentiment as blaming Southern pietistic moralists for the vote. One might quibble at the verbal move from moralism to moralists, but I made no claim to be quoting his words verbatim. Rather I was communicating his meaning. Did I do so fairly? Well, as ideas do not cast votes, it does not seem to misrepresent his thought to speak of moralists here. If I were to state that 'Trumpism' or 'cultural Marxism' is destroying the country, you would not be twisting my words if you described me as claiming that people holding such views—Trumpers and Marxists—were destroying the country. And if I were to use the verb “attack” in such a context, I would be implying a very high degree of intentionality, which again requires personal agency and therefore the involvement of persons, further legitimating your description of me. If someone claims that pietistic moralism is attacking the Reformed faith, as exemplified by the PCA GA decisions, then it is not misrepresenting that person to portray them as claiming that pietistic moralists are attacking the Reformed faith, as exemplified in the PCA GA decisions.

There was, I believe, a significant backlash with regard to this tweet, and so nearly 24 hour later Mr. Johnson posted this:

Here, the language of “attack” has been replaced by “influence” and “shaped by,” and the adversarial us-and-them feel that “attack” involves has been replaced by the more conciliatory “we.” The original GA context has also disappeared, along with the specific reference to the “Reformed faith,” becoming instead “conservative Christian circles.” The question is, are the two statements compatible? Is the latter a legitimate clarification of the former? No. They are in fact saying two different things, for the reasons noted in the previous sentences. The latter is a new statement, not merely a restatement of the original in a more precise or perspicuous form. Now, had Mr. Johnson simply said, “I was wrong in my earlier tweet; I'm sorry and withdraw it; here is what I really want to say to my good faith critics....” there would be no issue. But that is not what he does. There is no retraction or apology; instead he requires that his readers understand his first tweet in a way that is contextually and linguistically impossible, and claims that as his intention all along. One might say that the second tweet, far from being a clarification of the first, is instead a much vaguer and more nebulous statement.

Of course, it may be that Mr. Johnson did not communicate well in the heat of the moment. That is entirely understandable and surely most forgivable. Who expresses themselves clearly all the time, especially at moments of conflict and tension? But what was therefore needed here was not a later claim that his original words did not mean what they said. What was needed was a retraction and a clear acknowledgment that he should not have said them in the first place.

As to First Things, FT is not just a blogsite. All articles are vetted and fact-checked by the website editor and by a consultant editor, and then go out with the approval of the senior editor. Indeed, on principle I have published nothing online for some years now that has not gone through the hands of editors, precisely because I do not wish to misrepresent anyone. None of the FT editors has any vested interest in the PCA issues. Yet none of them consider my words to misrepresent or twist what Mr. Johnson said. And, to respond to Mr. Johnson's comments about scholarship—my presentation of his views is certainly in conformity with scholarly canons of discourse of which I am aware. Historians read texts, not minds.

Again, thank you for your gracious and thoughtful email. Though trenchant, I hope that the above is similarly gracious. Please forgive me if at any point that is not the case, for such was not my intention.