In Defense of the Ass: Is the Sermon a "Relic of the Reformation?" [Part 2]

Michael Glodo
May 2, 2015
The first part of Mike Glodo's article can be found here ~ Editor
...For Paul, being trendy was a decidedly bad idea when it comes to preaching. He warned that people "will accumulate for themselves teachers to suit their own passions." (2 Tim 3) But the most compelling reason to resist the "relic hypothesis" is found in one of the most monumental treatments of preaching by Paul in 1 Corinthians 1.
He directly addresses the question of the medium for divine communication in 1 Corinthians 1:18-31 There Paul justifies why he did not depend on sophistry (lit. "wisdom of word," v. 17) when appealing to Greeks or manifest signs to the Jews. Undeniably he did reason with Greeks in the marketplace and Jews in the synagogue (Acts 17:2, 17; 18:4, 19). He also performed signs among both (Acts 14:3; 15:12; Rom 15:18-19). But here he discounts them in relation to the "folly of what we preach." (v. 21)
This passage once vexed me. Was Paul critiquing two different things - sophistry and signs - or was there a common category to which both belonged? It turns out it's the latter. For the Greek, sophistry was the form of transcendent truth. For the Jew - with God's long history of wonder-working as his heritage - signs were the validating mark of a divine messenger. Sophistry and signs are the same here in that in their respective contexts they are the form which validates the substance. They are the media which validate the message. But the media have become idolatrous litmus tests. We can see this earlier in Jesus' ministry when he condemned his critics for demanding signs. (Mt 12:38ff) In the idol factory of the heart, the sign became the signified - Nehushtan redux.
Paul, the great contextualizer (1 Cor 9:22), refused to accommodate the message of the cross to idolatrous media which were being demanded by his hearers. Why? So that he would not "void" (i.e. empty) the cross of Christ of its power (v. 17). Think of the prospect - that prioritizing the medium over the message can make the cross of Christ impotent! It is to take God's light saber in hand and fumble the batteries out on the floor.
Paul dogmatically refused to couch the gospel in forms that had immediate and direct credibility to his listeners precisely because that's what they demanded. You've heard the old saying "be careful what you ask for." Quail anyone? (Num 11:33)
The foolish medium of preaching is the medium which God has promised to bless.
Hearing people's questions and figuring out what they are and aren't hearing in your sermons is crucial.[7] You should constantly be listening - ranging from the individuals you meet with to contemplating the context in which you live. (Acts 17:16) We are to be "exegeting our world" as well as the text of scripture - or as the Puritans would put it "analyzing our auditors." You might even want to follow the example of someone like Tim Keller who, according to the "relic theory," preaches monologue sermons but who also hosts a follow up Q&A time after the worship service for visitors and seekers.
Dostoyevsky alludes to his own conversion when in The Idiot Myshkin tells his relatives how he was revived from his comatose state, how he ceased to be an "idiot." He says, "I heard the braying of an ass in the marketplace." This is one "portrait of the preacher" John Stott's excellent book omitted - the preacher is a fool with a foolish message in a foolish medium, at least in the wisdom of the world.[8]
There is a practical aspect to this foolish medium. How does one know whether it is the power of God at work in him when he responds to a message? Novels, cinema, concerts and the like can produce powerful emotive responses in us. Perhaps even more powerful than any single sermon has. But how do we know that emotive response is the genuine work of God in us? How do we know when it's not the power of God but rather the thick hair, bright smile and affected manner of the man on the screen or the physiology of music so well-applied in Apple commercials? It's hard to know - at least in the moment and in the short term. So preachers must employ the foolish medium of preaching the scandalous cross so that it removes doubt whether God's power is at work in us.
The foolish medium of preaching, which is proclamation and not conversation, is not a passing cultural form but is the form God has sanctioned to wake the dead and ready them for the world to come. This is why the Westminster Shorter Catechism answers the question "How is the Word made effectual to salvation?"

The Spirit of God maketh the reading, but especially the preaching, of the Word, an effectual means of convincing and converting sinners, and of building them up in holiness and comfort, through faith, unto salvation. (WSC 89)

Quite honestly, the assertion that the sermon as we know it a "relic of the past" is what I classify as genus sloganizing, species hyperbole. Before Facebook and Twitter made idiots (not the good kind) of all of us, one didn't witness the constant passing off of slogans for theologies and worldviews. Sloganizing is a new form, or medium, given to us by the world for conveying transcendent truth; a contemporary successor to sophistry and signs. On the positive side, sometimes sloganizing theologians simply want to get the message through, try to get something to stick to minds rendered Teflon by the gazillion gospels being proclaimed from spam and banner ads.
But sloganizing as a method belongs to the spirit of the age. Borrowing on Jean Francois Lyotard's definition of postmodernism, sloganizing involves "simplification to the extreme." A slogan may cause things to stick temporarily, at least until the next "lost cat" poster is stapled over it, but it doesn't provide a system of thought upon which to hang one's ideas (or life) or on which to feed the souls of pilgrims.
Hyperbole is the slogan shouted. It is the ALL CAPS edition. There is so much data coming at us, our attention spans have been degraded to that of the goldfish, and the tempting way to be heard is by saying things in the extreme; the overstatement for effect. But like fireworks in August, its sparkle and boom becomes boorish when it becomes a persona, a schtick. As a former colleague wisely said, "You can't ride a gadfly." The gadfly needs a horse to bite. And that's the problem with the gadfly in ministerial training and preparation - by shouting LISTEN TO ME he's also shouting DON'T LISTEN TO THEM. Budding and burgeoning pastors must build their pastoral theology like a seamstress, not a relief pitcher.
It would be so easy to make a qualified, balanced, true statement such as "The traditional form of the sermon needs to reflectively adapt to different ways people listen today. And it can be really helpful to have time before and after worship and throughout the week to hear back what people have heard and to find out what they are asking." But this is just like the boring, center-of-the-fairway 280 yard drive of Jordan Spieth. It's balanced. Not overstated. Its "folly" is that it lacks the carnival barker's pizazz.
Paul commends earnestness as a mode of ministerial discourse when he says, "And the Lord's servant must not be quarrelsome but kind to everyone, able to teach, patiently enduring evil, correcting his opponents with gentleness." (2 Tim 2.24-25a) The shock jock preacher just like the shock jock theologian is like the bicyclist with his feet strapped to the pedals - he better be ready to keep pedaling fast...for a long time...gotta overstate your previous overstatement...over, and over, and over. But hyperbole has little place in the life of the pastor.
In Moby Dick, Ishmael makes his way to the Seaman's Chapel on the Sabbath before setting sail in the fated Pequod. Entering he notices a curious thing - the pulpit is built out as the prow of a ship. He observes

What could be more full of meaning?--for the pulpit is ever this earth's foremost part; all the rest comes in its rear; the pulpit leads the world.  From thence it is the storm of God's quick wrath is first descried, and the bow must bear the earliest brunt. From thence it is the God of breezes fair or foul is first invoked for favorable winds. Yes, the world's a ship on its passage out, and not a voyage complete; and the pulpit is its prow.

An apt metaphor for the question addressed here. It is the prow, not the stern, that must face the brunt of the storm, especially and even more so when the waves of culture batter it. Because the prow is where the bulwarks are - the very structures designed to withstand the storm. A prow aimed with the wind is no defense to the pummeling the ship takes and thus fails to bear its voyagers safely through. Such a ship makes a great canoe, but the cataracts await. No, a prow turned with the wind is the only one sure to bear the ship across the bar.
Mike Glodo is Associate Professor of Biblical Studies at RTS, Orlando
Notes:
[7] It's really important to get a sense pod what people are hearing in our preaching, whether through carefully cultivated subtle means or with a formal feedback group that gives you an honest 360 degrees assessment.
[8] I heartily Stott's, The Preacher's Portrait, which will do nothing but strengthen the case against 'the relic theory'
Share on Facebook Tweet Widget 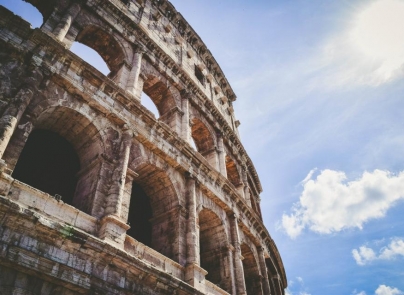 Fabiola and Her Radical Charity