Aimee Byrd
July 12, 2016
This is going to be a different kind of book review. Ruth Tucker’s Black and White Bible, Black and Blue Wife is different kind of book. It is a page turner autobiography about an educated, independent Christian woman who falls in love with the tall, handsome, charming guy who knew all the right answers at a Christian retreat. She marries him and endures 19 long years of abuse. But as the subtitle explains, it’s also her story of finding hope after domestic abuse. And did I mention her husband was a preacher? 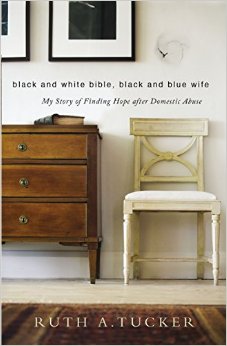 "And husbands on their parts, because they're sinners, now respond to that threat to their authority either by being abusive, which is of course one of the ways men can respond when their authority is challenged – or, more commonly, to become passive, acquiescent, and simply not asserting the leadership they ought to as men in their homes and in churches."

"He will have to rule, and because he's a sinner, this can happen in one of two ways. It can happen either through ruling that is abusive and oppressive – and of course we all know the horrors of that and the ugliness of that – but here's the other way in which he can respond when his authority is threatened. He can acquiesce. He can become passive. He can give up any responsibility that he thought he had to the leader in the relationship and just say â€˜OK dear,' – Whatever you say dear,' – Fine dear' and become a passive husband, because of sin."

I did ask Ware if he would repudiate those statements, as the inference is clearly one that a man's abuse is the result or effect of the woman challenging his authority by not submitting. He denies that is the inference. He also said that men bear full responsibility for the sin of abuse.

Unfortunately, the link provided on CBMW for the talks is now broken. But I did find another article (there are many) that covered this talk. Here is another one that summarizes more of Ware's argument.

**Another link has been brought to my attention, from an interview Ware did on Revive Our Hearts, where he basically says the same thing.