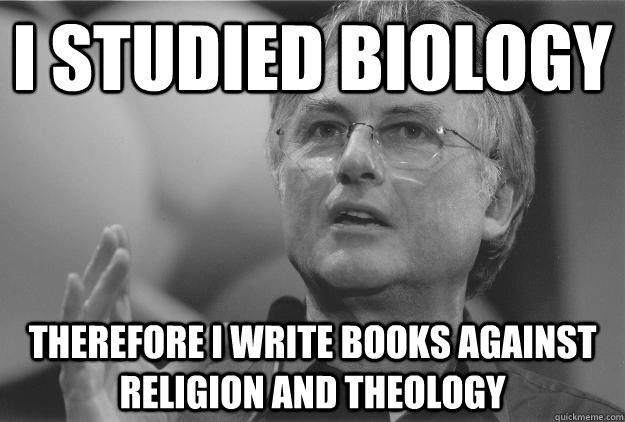 "Can I know God exists?" This is what militant atheism of the Richard Dawkins stripe has stridently sought to convince us the answer is "No!" For a god they deny exists they sure do spend a lot of time talking about him! As we continue through the Westminster Larger Catechism, question and answer 2 gives us an answer:

How doth it appear that there is a God?
The very light of nature in man, and the works of God, declare plainly that there is a God; but his word and Spirit only do sufficiently and effectually reveal him unto men for their salvation.

We exist to glorify and enjoy God. But that begs the question of whether there are reasons for belief in a god in the first place. There are three offered in Q&A 2: the light of conscience, the light of creation, and the light of the canon.
Let me say a word about using the so-called proofs for God’s existence. They serve a twofold purpose. First, they are meant to bolster our own faith. We believe in order to understand, as ancient Christians used to say. We believe God exists and then we come to know that truth more and more over the course of our lives. Second, the proofs can certainly be used in witnessing to unbelievers, but in doing so, our expectation should be that they can only show that our faith is reasonable; they should not be expected to “prove” God outright. Only the Holy Spirit can do that.
Light of Conscience
How can I know God exists? The light of conscience, or, as the Catechism calls it, “the light of nature in man,” which is within me testifies that he exists. Humanity naturally knows that God exists. For example, as Paul passed through Athens and went up to the Areopagus to testify to Greek philosophers, they had idols for every god. And just in case they missed one, they had one with this inscription: “To the unknown god” (Acts 17:23). Why would these great philosophers create idols? It was because God has set eternity in their hearts (Ecc. 3:11). They intuitively knew that there was something greater than them.
Because of this Paul’s words in Romans 1 take on significance. The fact that people deny God exists or do everything in their life to life as if he did not exist is evidence that on our consciences is the knowledge of God. Why would people need to go to such lengths if God did not exist? In our sinfulness we want to suppress the knowledge of God. But trying to do this is as effective as pushing down all the bubbles in a jacuzzi.
Light of Creation
How can I know God exists? The light of creation testifies that he exists. As with conscience, the Catechism says “the works of God declare plainly that there is a God.” In Psalm 19 David likens the heavens to a preacher, constantly proclaiming their Maker: “The heavens declare the glory of God, and the sky proclaims his handiwork, day to day pours out speech, and night to night reveals knowledge” (Ps. 19:1–2).
This is exactly what Paul says in Romans 1. God is knowable in creation. It is plain or evident to us. In the things God has made all humanity from the creation onward has testified of his creation. In fact, again Paul proves the positive by the negative. Because humans create idols according to their own image this proves that God exists, for where did the idea to make a god come from in the first place?
Light of the Canon
How can I know God exists? The light of the canon, the Word of God, testifies of his existence. The Catechism sets this final reason apart from the previous two by using two adjectives: “But his word and Spirit only do sufficiently and effectually reveal him unto men for their salvation.”
While conscience and creation reveal the existence of God, only the Word of God does so sufficiently. In Paul’s words, conscience and creation can only leave people “without excuse” (Rom. 1:20). They can only testify that there is a God, while in the Word alone we have all that we need for a saving knowledge of God.
While conscience and creation reveal the existence of God, only the Word does so effectually. Only the Word, joined together with the Spirit of God, can bring us to a saving knowledge of Jesus Christ. Psalm 19 compares and contrasts creation and the canon. While creation proclaims the glory of God, the law of the Lord revives the soul, makes wise the simple, rejoices the heart, enlightens the eyes, and endures forever.
But it is not just the bare Word that does this. The Word is the instrumental cause of salvation, that is, it is the means by which the Lord brings us to faith. But the efficient cause, that is, the power that actually does the work, is the Holy Spirit alone. As Paul says in 1 Corinthians 2, “my speech and my message were not in plausible words of wisdom, but in demonstration of the Spirit and of power” (v. 4). As Paul went on to speak of the glories of eternity, he said, “these things God has revealed to us through the Spirit” (v. 10a), and, “we have received not the spirit of the world, but the Spirit who is from God, that we might understand the things freely given us by God” (v. 12).
In saying this the Catechism reminds us that in all our evangelism, witnessing, testifying, and apologetics, we must reply upon the power of the Holy Spirit to use his Word to bring the world to faith in Christ. For what is the use of arguing over issues of the conscience and ethics or over issues of creation and teleology unless these lead people to encounter Christ himself in his Word?
Share on Facebook Tweet Widget