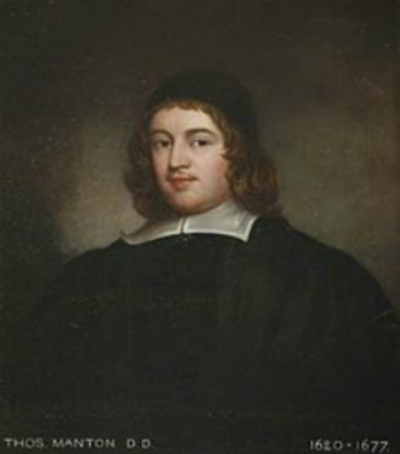 It was the great nineteenth-century evangelical Anglican, bishop J. C. Ryle (1816–1900), who said that Thomas Manton (1620–1677) was “a man who could neither say, nor do, nor write anything without being observed” (“An Estimate of Manton”). Yet he is a man about whom hardly anything has been said, done, or written. The first biography of him was not written until William Harris’ "Memoir" nearly two hundred years after his death in 1870, when his Works were reprinted. In the same year J. C. Ryle wrote his “Estimate.” A brief biography was then included in the Dictionary of National Biography in 1893 (vol 36). Recently his commentaries on James and Jude have been reprinted as well as his sermons on The Temptation of Christ and The Life of Faith. Hughes Oliphant Old has devoted a section to Manton in volume 4 of his massive seven-volume series on the history of preaching. Even more telling is that there is only one doctoral dissertation on Manton, written in 2008 by Derek Cooper, who also wrote a biography of Manton, which I was able to commend.
Why is Manton Forgotten?
So why has Manton been forgotten? The simplest explanation is the one Carl Trueman has given concerning John Owen. All those Non-Conformists were on the losing side of England’s theological history. Since Manton was not only a Puritan but also a Presbyterian, he was on the losing side against the Church of England. This meant that after the “Great Ejection” of 1662 those within the Church of England ignored him in England’s intellectual history. Along with the rest of those outside the Church of England, he was exiled from political position, cultural influence, and the intellectual life of English Universities (Trueman, The Claims of Truth, 1–2; John Owen: Reformed Catholic, Renaissance Man, 1–2). In a word, to the victor of the religious and political wars of the seventeenth century go the spoils.
Is He Worthy of Our Study?
So is a forgotten man worthy of our time and study? Let me answer this by quoting from the estimates of Manton by others:
Manton’s Enduring Importance
So what is Manton’s enduring importance? Like all the Puritans, Manton is an example of one who had a profound theology that had a heartfelt impact on the Christian life, the church, and the world around. I think J. I. Packer summarizes Manton’s legacy best, in the following description of Puritanism in general, that communicates what Manton was all about: Puritanism was “an evangelical holiness movement” and its piety was “centred upon regeneration and repentance, self-suspicion and self-examination, rational Biblicism and righteous behaviour, discursive meditation and rhetorical prayer, faith in and love to Jesus Christ as Saviour and Lord, recognition of the sovereignty of God in providence, grace, and judgment, the comfort and joy of a well-grounded assurance, the need to educate and cherish one’s conscience, the spiritual war against the world, the flesh, and the devil, the ethic of discipline and duty, and the saints’ hope of glory” (J. I. Packer, “An Anglican to Remember—William Perkins: Puritan Popularizer,” in Pilgrims, Warriors, and Servants: Puritan Wisdom for Today’s Church, ed. Lee Gatiss, St. Antholin Lectures Volume I: 1991–2000 [London: The Latimer Trust, 2010], 143).
We see this in the fact that of his twenty-two volume collected Works, almost all of them are sermons. There are series of sermon such as on Romans 8, John 17, Matthew 4, and 2 Thessalonians 2. There are fast day sermons intended to rouse the leaders of the nation. There are occasional sermons. There are series that were turned into books like his commentary on Jude and his sermons on Colossians 1 against the Socinian doctrine of Christ. As a preacher and pastor, then, he is eminently readable and understandable.
Let me conclude with Packer’s words about Manton: “Anyone who means business with God will find that Manton grabs, searches, humbles, and builds up in a quite breath-taking way” (“Introduction,” in James, x).
Share on Facebook Tweet Widget