The Reformers confronted the Catholic church with five scriptural principles by which they sought to reform the church.  If the 21st century church is to once again transform the culture by the proclamation of the gospel of the LORD Jesus Christ, it must reclaim its heritage:  the five solas of the Reformation.  Then the gospel will be heralded with accuracy, clarity, and power.  Foundational to the gospel is Sola Gratia - the understanding that we are saved by the grace of God alone.

To understand this beautiful “sola”, we need to define words.  How the Latin comes into English is readily apparent:  Sola becomes sole; Gratia becomes grace.  How about the meaning of the English words?  Sole seems straightforward:  “pertaining to one individual or group to the exclusion of all others”[i]  Grace is a bit more varied.  One popular definition uses the letters of the word as an anachro-nym: “God’s Riches At Christ’s Expense.  The Greek word, however, can refer to a number of things[ii]:

Consider now Ephesians 2:1-10.  In this text, Paul clearly teaches that “by grace you have been saved”.[iii]  Where do we get the idea that salvation is by grace “alone” however?  Reading carefully, you will see that this passage is organized around the contrast of life “before Christ” and life “in” or “after Christ”.  Look at verses 1-3, before Christ you were:

A couple of observations are appropriate.

God is the actor who will redeem us from our hopeless estate.  To explain, in verse 4 & 5, Paul:

God did what the dead sinner, whose very nature deserved wrath, could not do.  This is grace that reflects all the facets listed earlier, exactly what Paul concludes at the end of verse 5: “by grace you have been saved”!  Continuing to describe the believer “in” or “after” Christ, Paul lists two more things in verse six that God has done.  On top of “making us alive with Christ”, He has (2) raised and (3) seated us with Christ!  Perhaps this is why the Apostle John writes:

And from his fullness we have all received, grace upon grace.[vi]

God gives us grace… And then in place of grace, He gives us more grace!  Verse 7 provides the reason that God’s love motivated Him to shows grace:

“so that in the coming ages he might show the immeasurable riches of his grace in kindness toward us in Christ Jesus.”

Verse 8 then reiterates and clarifies. In the coming ages the magnitude of his grace in Christ will be shown or demonstrated “’For’ by grace you have been saved.” God’s act of saving us (making us alive with Christ) displays the overflowing riches of His grace.  A questions remains:

Is this grace “alone”?

Does the sinner cooperate in some fashion with God, does he/she “accept Christ”?  Are sinners desperately “sick” but still cooperate with God by receiving His grace?   Paul’s description of the sinner as “dead”, under the control of the world, the flesh and the devil, and by nature deserving of God’s wrath, should be sufficient to answer the question.  However, verse 8, settles the issue.  Paul writes:

“for by grace you have been saved through faith.  And this is not your own doing; it is the gift of God.”

The Greek grammar of the passage reveals that “faith” is the instrument by which this grace is received.[vii]  It might seem that “faith” is something the sinner expresses (or does).  However, when Paul writes:  “and this is not your own doing”, the word “this” refers to the exercise of that faith.[viii] Thus, when Paul states that “this” is not of your own doing, he is telling us that even the exercise of faith is not of the sinners “doing”, rather it is “God’s gift”!

So salvation is indeed by “grace” alone.  It is solely, to the exclusion of all else, the expression of His love for sinners.

Martin B. Blocki has served since 2003 as the Associate Pastor of the Reformed Presbyterian Church of North Hills in Pittsburgh, PA since 2002.  Rev. Blocki graduated from Indiana University, Bloomington (BME), Arizona State University (MM), and the Reformed Presbyterian Theological  Seminary (MDiv).  Martin and his wife, Kathy, have two married sons, one daughter, and four grandchildren.

[v] Romans 1:18: “For the wrath of God is revealed from heaven against all ungodliness and unrighteousness of men…” 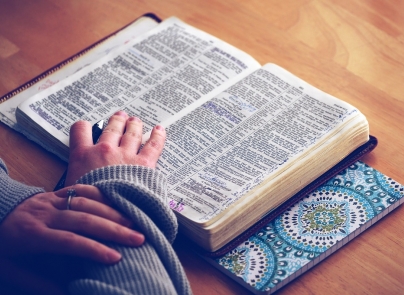