The Practice of Christian Zeal

Joel Beeke
April 8, 2016
In concluding our series on the Puritan vision for Christian zeal (part 1, part 2, part 3, part 4), we now take up come practical ways in which we can put it into practice. We must pray for grace to put Christian zeal into action, whatever our calling in life may be. Let us look briefly at three callings: the ministry, the laborer, and the parent.
The Ministry
If you are called to be a minister, it would be tragic for you to follow that calling without zeal. William Gurnall (1616-1679) said that ministers must have “a zealous boldness,” writing, “Jeremiah tells us the word of God was as fire in his bones; it broke out of his mouth as the flame out of a furnace” (The Christian in Complete Armour, 2:578). The zealous minister has a tender love for souls and labors for their salvation (1 Cor. 9:22). He catechizes and instructs the ignorant (1 Tim. 4:11), rebukes and persuades the profane (Titus 1:9–13), exhorts and encourages those seeking God’s grace (2 Cor. 5:20), assures those who have begun to run well (1 Tim. 4:13), establishes the wavering and doubtful (Titus 2:1), revives the fearful and despondent (1 Tim. 4:16), restores the rebellious (2 Cor. 2:6–8), comforts those who are strong and faithful with the hope of glory (1 Tim. 4:6), and zealously intercedes for the flock entrusted to him (Col. 4:12–13). (John Reynolds, Zeal a Virtue: Or, a Discourse Concerning Sacred Zeal, London, 1716, pp. 163–64) It is true that such things are incumbent upon the minister whether he is zealous or not, but how impossible these things would be if his heart were cold and lifeless in its calling?
The Laborer
Consider the environment in which a Christian laborer works. He is constantly confronted by bad examples; within hearing of profanity, coarse joking, and blasphemy; subjected to gossip, slander, complaining, backbiting, malicious speech, and lies; subjected to office smut in which sin is glamorized, marriage vows are broken, and flirting is fun. He is exposed to immodest dress, seductive speech, and wanton eyes. He faces orders and expectations that require him to lie, cheat, steal, deceive, withhold information, and present half-truths as full truths.
The zealous laborer will be ever mindful that God is the source of his calling. Because God has placed him in the workplace, the zealous laborer will work not to be seen by men, or only when his boss is looking, but rather, will do all his work as unto the Lord who “hired” him (Eph. 6:5–9). His goal will be the Lord’s favor and pleasure, not only in his duties but also in the way he speaks of his work (without murmuring) and regards it. He will do his work joyfully, thankfully, and willingly, desiring that it might be a sweet-smelling offering and sacrifice unto the Lord his God (Eph. 5:2). We will then be enabled to work for our superiors “with good will” (Eph. 6:7). William Gouge (1575-1653) said that Christians should be “both quick and diligent” in serving those in authority over them, where quick means he does not waste time on a task but tries to get a lot done and diligent means he puts effort and care to do his job well (Of Domesticall Duties, reprinted, 1976, 620).
The zealous laborer will also be mindful of the temptations particular to his calling. Some workers are required to travel away from home and family and spend many nights alone in hotels. Some must work closely with people of the opposite sex, whether in person or over the phone or through e-mail. Some are constantly exposed to the sins of others.
The zealous laborer will not be outwitted by Satan but will be mindful of his wiles (2 Cor. 2:11). He will consider the places and situations where Satan has most likely set his traps and will be on guard against those temptations. He will be mindful that Satan is warring against him and will not miss the least opportunity to destroy him (1 Peter 5:8). He will guard his ears against conversations that would fill his mind with evil and will think only on things which are good (Phil. 4:8). He will strive to know his own heart and the temptations to which he is prone (Ps. 139:23–24) and will therefore guard his heart above all else (Prov. 4:23). He will make a covenant with his eyes to put no wicked thing before them (Ps. 101:3; Job 31:1). He will meditate upon the things of God (Ps. 1:1–3) to ever turn his feet into the way of God’s commandments (Ps. 119:59). He will store God’s Word in his heart that he might not sin against Him (Ps. 119:11).
Parents
Of all callings, parenting is the most demanding. The Christian parent is called to lead little ones to God, yet he struggles with their natural rebellion against the things of God, their pride, their selfishness, their innate love and desire for sin, and the inherited corruption of their nature. Against this barrage of natural wickedness, the parent understands that he must discipline his children and protect his children from straying into danger.
It gets even more difficult. Not only does the parent face the sinfulness of his children, but he must also obey his calling in the face of his own sinfulness. He must expect from his children the very thing he is struggling to give himself, and he must discipline them for disobedience in the very areas in which he continues to struggle. This makes him feel like a hypocrite, nags at his conscience, and weighs heavily on him every time he has to correct his children. There is no excuse for his sin, but overlooking their sin just because he is struggling too only encourages their sin. Precisely because parenting is so hard, parents must constantly fan into flame the zeal of their love for their children. Gouge wrote, “The fountain of parents’ duties is love…. For great is that pain, pains [labors], cost, and care, which parents must undergo for their children. But if love be in them, no pain, pains, cost, or care, will seem too much.” (Of Domesticall Duties, 498)
Share on Facebook Tweet Widget 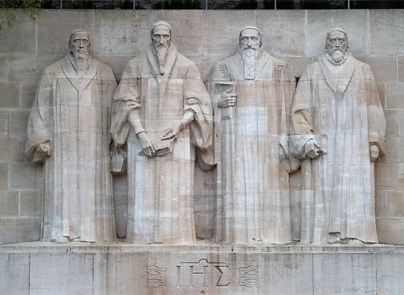