Review of Introduction to Scholastic Theology 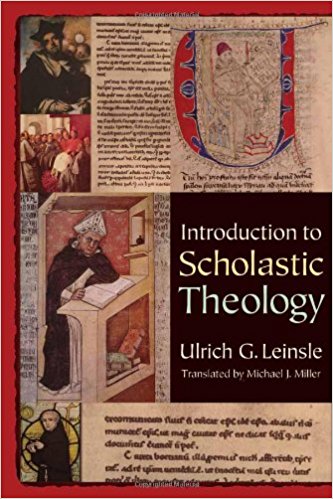 For most Protestants, medieval theology is a strange world. We are familiar with slogans such as, post tenebras lux (“after darkness light”), in describing the Protestant Reformation. Terms like, “scholastic,” are customarily theological curse words in our circles. What possible interest could Reformed Protestants have, therefore, in a book introducing Scholastic Theology?
Contrary to popular misconceptions, the medieval period was not the dark ages as much as it was the “less light” ages. While many things were wrong and needed reform, many things were right as well. Scholastic theology was a means, primarily, of knowing and loving God and teaching others to do so. Ulrich Leinsle illustrates these things by treating the foundations and origins of scholastic theology from Augustine through the seventeenth-century, with some brief discussion of what came next. His material shows the continuities and discontinuities in theological method and University education from the middle ages through the post-Reformation period in a way that helps readers understand scholastic theology as a significant piece of church history. This is a mid-level text that will enable readers who love the Puritans and post-Reformation theology to see precedents both for Protestant theology and methodology in the medieval period.
One of the most useful features of Leinsle’s book is his focus on how various authors defined theology as a discipline and how this affected their treatments of the relationship between theology and philosophy. As is the case with many historical terms, such as Puritan, he begins his treatment by illustrating the difficulty of defining “scholastic theology” (1-8). He argues that it is easier to describe scholastic theology by its characteristics, methods, and goals than it is to define it (9-11). Scholastic theology was characterized by its preparatory studies (36, 88, 245, 259), reading and commenting on authoritative texts (lectio, and auctoritas), providing reasons (ratio) for received articles of faith (20-23), theological disuptations (disputatio), and providing a basis for the relationship between the text of Scripture and systematic theology (54-65, and throughout). Many of the authors treated are well know while many more will be largely unknown to the average reader. One recurring theme is that the goal of theology was generally treated as man’s blessedness in the beatific vision of God. This meant that theology had theoretical and practical components throughout (133, and throughout), with many authors defining theology as wisdom (sapientia) received through the Word and Spirit of God (155, 163, 179, 258, 315). These questions passed seamlessly into Protestant systems of theology. Leinsle shows throughout how situating the study of theology in rising Universities, coupled with the rediscovery of Aristotelian philosophy, led to an impetus to define theology as an academic science in order to justify its place at the head of the University curriculum. Scholastic theology admitted a wide array of opinions and schools of thought. Leinsle illustrates as well the increasing tension in medieval theology between the priority of lecturing on the Bible or on Peter Lombard’s Sententia (47). This tension carried over into the debates between Protestants and Roman Catholics, in modified forms, into the time of the Reformation (e.g., 259-260). One section worthy of note to students of the Puritans is the uncanny similarity between the structure and aims of scholastic sermons to the standard Puritan sermon (68-73). This illustrates simultaneously that the Puritans may have been closer to the middle ages than some are willing to admit and that the medieval scholastics could have a pastoral bent in their theology. These features and many others make Leinsle’s book a remarkably comprehensive introduction to its subject.
This reviewer’s only points of criticism relate to the author’s treatment of Protestant scholasticism. He argues that Protestant scholasticism had a markedly different character than its medieval and Roman Catholic counterparts (299). However, this is overstated. One of the remarkable features of Leinsle’s book is that those familiar with Protestant scholastic theology can find virtually every point of Protestant theological methodology in some part of medieval scholasticism. This is especially true, as noted above, in regard to questions as to whether theology is theoretical or practical and to the assertion that theology is spiritual wisdom. Placing “scholasticism” in quotation marks in connection to Post-Reformation Protestantism, moreover, gives the mistaken impression that Protestant scholasticism does not really pass muster as scholastic theology (299-300). However, if the author’s assertion is correct that scholastic theology was not restricted to any one school of thought, then Protestant scholasticism has as much right to the title as post-Trent Roman Catholic theology. The key issue was the development of an academic form of theological education largely through the Universities. Leinsle’s treatment of Protestant scholastics is also limited largely to Gerhard (Lutheran), Alsted (Reformed), and Wittich (Reformed-Cartesian). This bypasses some of the most formative architects of Protestant theological methodology, especially Reformed figures like Franciscus Junius and Andreas Hyperius. In short, Leinsle’s treatment of medieval and Roman Catholic scholastic theology is superb while his treatment of Protestant scholasticism is incomplete, if not dismissive.
Scholastic theology is precise and sometimes complex. This means that any thorough treatment of scholastic theology will likely have similar characteristics. Leinsle’s book, while not exactly an easy read, makes medieval scholastic theology about as easy at it gets. Scholastic theology is an important part of the history of the church. It is also woven into the heritage of Protestant theology. Leinsle’s book can help show that, while scholastic theology could run into excesses, scholastic influences were not always a bad thing.
Share on Facebook Tweet Widget