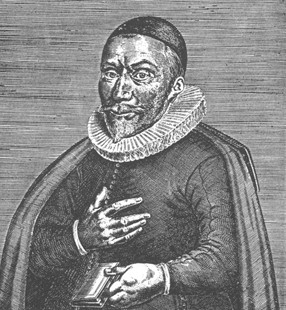 As the star pupil of William Perkins at Christ’s College Cambridge, William Ames (1576–1633), followed his mentor’s preaching pattern of explaining, teaching, and applying the text. It may seem strange that in his systematic-theological Marrow of Theology, Ames devoteed a whole chapter to preaching (ch. 35). Yet, since he understood theology as the doctrine of living to God, this comes as no surprise. In line with Perkins, preaching was the means for propagating such a life.
Proclaiming the Word
With preaching being of such importance, the minister must proclaim the Word “for the edification of the hearers.” Connected to this goal, he must practice what he preaches and be mighty in the Scriptures beyond the ordinary believer. As such, he “must not put his trust in notes and commentaries.” In other words, do not turn too quickly to the tools available for preaching beyond the Bible.
Edification by Doctrine and Application
To edify hearers the preacher must first explain the text and then apply it to hearts as required. This involves first setting forth doctrine (theological principles) and proofs (from other Scriptural testimony) and then illustrating what has been proven. Uses or applications “sharpen” the truth and make it relevant as it pierces “the minds of those present with the stirring up of godly affections.” Preaching, then, must not “be dead, but alive and effective,” so that even an unbeliever may be seized by the preaching. Application consoles the oppressed and exhorts or admonishes the failing. Consolation either takes away or lessens grief and fear to encourage the hearer that he or she shares in the benefits that comfort the consciences of believers. In the “pious and troubled mind,” contrary thoughts are thus “dispelled and refuted.” Exhortation “excites some inward virtue or furthers the exercise of it,” while admonition seeks to “correct some viciousness” with remedies found from the most effective passages. “They sin, therefore,” said Ames, “who stick to the naked finding and explanation of the truth” by neglecting application. Such preachers “edify the conscience little or not at all.” They also sin who “care little about what they say” apart from the fact that they have thought and spoken about many things as they squeeze “many things out of the text” making it say what they want. Preaching must also not involve a “show of human wisdom” but “the demonstration of the Spirit” for the purpose of “building up” faith in God. Otherwise, “it is as useless as hay and stubble.” Simply put, preaching without application is not preaching. The church today needs to pay close attention to this. Human testimonies should be at a minimum and  used only “on the rare occasions” when it seems most beneficial and “much less should words or sentences in Latin, Greek, or Hebrew be used which the people do not understand.” In general, anything that smacks of human wisdom must be avoided. Simply put, the pulpit is no place to show people how clever you are.
Delivery
Concerning delivery, Ames advises that speech and gestures should be “completely spiritual, flowing from the very heart” and with “zeal, charity, mildness, freedom, and humility mixed with solemn authority.” Pronunciation should be “natural, familiar, clear, and distinct so that it can be easily understood” and without dramatic pauses and accelerations of speech. “The power of the Holy Spirit more clearly appears in the naked simplicity of words, than in elegance and luster.” Still, if anyone possesses “forcefulness in speaking he ought to use it with genuine directness.”
So, preachers, listen well to what Ames has to say: Preach the Word in “naked simplicity” not “naked finding,” teach it, and apply it, naturally not mechanically and all in the power of the Spirit for the good of your hearers.
Share on Facebook Tweet Widget