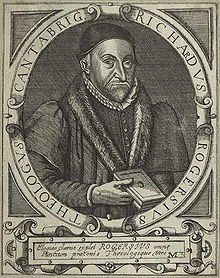 Richard Rogers (1551–1618) is best known today for his massive Commentary on the Book of Judges, which is a collection of 103 sermons. In it we see that his preaching was very practical and experiential. For example, in Sermon 74, he describes the Holy Spirit’s inward work of conversion upon the soul: “While we give heed to the doctrine of the Lord Jesus, which is plainly, soundly, and powerfully taught us, the Lord enlighteneth us with grace and power of the Holy Ghost, and giveth us another heart to serve him (as he saith in Ezek. 36), than we had before” (pp. 655–656).
Here again we see the Reformed doctrine of predestination applied to the personal experience of salvation. Referring, like Perkins, to “that golden chaine” of Romans 8:30, Rogers said, “There is no other way to seek out the certainty of our election” apart from “the gift of faith, and the Spirit of God sanctifying” in our effectual calling. He explains that “predestination itself is manifested in time, by the enlightening and opening of the heart to receive the glad tidings of the gospel,” so that “Christ is embraced by faith” and “the Holy Ghost is given to the believer, who quickens the heart with spiritual grace.” God gives different degrees of grace to different people, but the work of salvation is fundamentally the same (p. 656).
God works by means, and the experience of conversion comes in stages. With respect to the beginnings of saving faith, Rogers says, similarly to Perkins, that first God is “stirring up in them an earnest coveting of these graces, a special hunger and thirst after them,” until He brings them to “the certainty and assurance of salvation.” God preserves and nourishes these strong desires for His grace in believers so that they continue to grow and to serve Him better (656).
Roger’s best-known book in his own era was his 1603 Seven Treatises Containing Such Direction as Is Gathered out of the Holy Scriptures, Leading and Guiding to True Happiness, Both in This Life and in the Life to Come, and May be Called the Practice of Christianity, which ran through five editions by 1630. Sadly, neither version has been reprinted since the seventeenth century. This popular work laid the foundation for a great number of Puritan manuals on the Christian life. William Haller writes: “The Seven Treaties was the first important exposition of the code of behavior which expressed the English Calvinist, or more broadly speaking, the Puritan, conception of the spiritual and moral life. As such it inaugurated a literature the extent and influence of which in all departments of life can hardly be exaggerated” (The Rise of Puritanism, 36).
The Seven Treatises consists of a seven-part exposition of true saving faith. In the first treatise, Rogers delineates the marks of those who are the true children of God. He describes conversion and how to discern true saving faith. The second treatise presents the godly life, one marked by keeping God’s commandments by faith in God’s promises. The third treatise teaches about the means of helping and growing true godliness. Rogers speaks of the public means of the preaching of the Word, the sacraments, and public prayers. There are also private means of grace. Irvonwy Morgan writes: “Rogers distinguishes seven private helps to godliness. First, those which are practiced alone, namely watchfulness, meditation, and what he calls ‘the armour of a Christian’; then those which are practised with others, namely conference [godly conversation] and family-exercise [or family devotions]; lastly those which are common to both, namely prayer and reading” (The Godly Preachers of the Elizabethan Church, 129). There are also the extraordinary means of responding to God’s providence: solemn times of thanksgiving for periods of unusual blessing, and solemn times of fasting for periods of unusual affliction. The fourth treatise gives eight reasons why a Christian should practice the daily disciplines of godliness, and calls the reader to walk with God through nine daily duties. In the fifth treatise, Rogers examines the obstacles to walking with God, such as Satan, leaving our first love, and evil and worldly lusts. The sixth treatise offers a lovely view of the privileges of believers and how we may enjoy them. In the seventh treatise, he wraps up the book by answering objections.
Rogers’s Seven Treatises commends to us a Christianity that is both Reformed and experiential, characterized by a disciplined, wartime mentality operating with spiritual discernment. It engages the Christian to live each day with an eternal perspective, seeking first the kingdom of God and His righteousness. He emphasizes the heart as the central arena where battles are fought and won. Rogers set a pattern for maintaining a careful walk of holiness. Such practical godliness leads in turn to pulpit proclamation that demands a high level of holiness from the people, and yet recognizes that we always fall short of the ideal.
Today, people are prone to say, “That’s legalism; it’s too high; it’s too hard.” They want an easy Christianity with a Christ who meets all their immediate desires. They may tolerate some discipline in the outward life to attain their earthly goals. However, it is common that they use the banner of “grace alone” to claim that spiritual blessings come easily once you find the right key, without pain, humbling, or wrestling against evil. They forget that “the grace of God” teaches us to deny “ungodliness and worldly lusts,” and instead “live soberly, righteously, and godly,” with our eyes fixed on the “blessed hope” of Christ’s appearing, all the while being “zealous for good works,” as Paul taught us (Titus 2:11–14). The Puritans preached discipline by grace and self-control in hope. Because they did so, they are models of Reformed biblical and experiential preaching.
Share on Facebook Tweet Widget